Located in northwestern Oklahoma, Major County is bounded by Woods and Alfalfa counties in the north, Garfield County on the east, Kingfisher, Blaine and Dewey on the south, and Woodward on the west, Major County has 957.87 square miles of land and water. It is drained by the North Canadian and Cimarron rivers and the Eagle Chief, Griever, and Sand creeks.

Upon statehood in 1907, Major County was created from southern part of a territorial county.[4] Fairview, which had been settled following the Land Run of 1893, was designated the county seat and voters reaffirmed the choice on December 22, 1908.[5] The county's commissioners rented office space until a brick courthouse was constructed.[5] A second courthouse, made of stone, was erected in 1928.[5]

Named for John Charles Major, a representative to the state's 1906 Constitutional Convention, the area was originally settled by large numbers of Kansas Mennonites.[4] One county town, Meno, received its name from an early leader of the Mennonite movement.[4]

Eagle Chief Creek, which empties into the Cimarron River near Cleo Springs, was known to the Cheyenne people as Maheonekamax.[8]

There is a large gypsum formation extending across much of western Oklahoma, and the Ames Structure, which is buried under 3,000 meters of sand and soil and is possibly the result of a meteorite impact.

The town of Ringwood is a well known producer of watermelons in the region and holds a Watermelon Festival annually.[6] 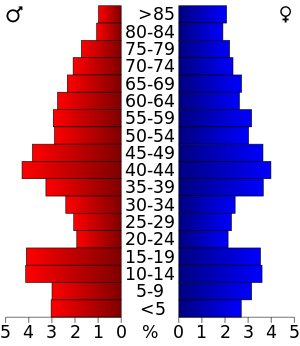 Age pyramid for Major County, Oklahoma, based on census 2000 data.

Of the 3,046 households in 2000, 31 percent had children under the age of 18, 63.7 percent belonged to married couples, 6 percent were run by a female householder with no husband present, and 27.5 percent were non-families. A quarter of the households were made up of individuals and 13.5 percent had someone living alone who was 65 year of age or older. The average household size was 2.44 and the average family size was 2.92.

The county's economy has historically been based on agriculture, specifically wheat farming, poultry raising and cattle ranching. Major crops have included corn, wheat, Kaffir corn, broomcorn and alfalfa. The Hallren Poultry and Creamery founded in Fairview in 1936 was the county's largest employer by the late 1950s.[4]

Oil and gas production have significantly bolstered the county economy, especially around the Ames Structure and the Ringwood oil field.[4]

The following sites in Major County are listed on the National Register of Historic Places: