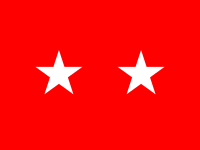 Rank flag of a major general in the United States Army 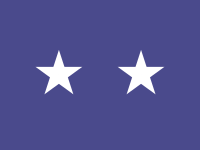 The United States Code explicitly limits the total number of general officers that may be on active duty at any given time. The total number of active duty general officers is capped at 231 for the Army, 61 for the Marine Corps, and 198 for the Air Force.[1] Some of these slots are reserved or finitely set by statute. For example, the Deputy Judge Advocate General of the Army[2] is a major general in the Army; the same rank is held by the Deputy Judge Advocate General of the Air Force;[3] the Army's Chief of Engineers[4] is also appointed as a major general and thereafter promoted to lieutenant general.

To be promoted to the permanent grade of major general, officers who are eligible for promotion to this rank are screened by an in-service promotion board comprising other general officers from their branch of service.[5] This promotion board then generates a list of officers it recommends for promotion to general rank.[6] This list is then sent to the service secretary and the Joint Chiefs of Staff for review before it can be sent to the President, through the Secretary of Defense for consideration.[7] The President nominates officers to be promoted from this list with the advice of the Secretary of Defense, the service secretary, and if applicable, the service's chief of staff or commandant.[8] The President may nominate any eligible officer who is not on the recommended list if it serves in the interest of the nation, but this is uncommon. The Senate must then confirm the nominee by a majority vote before the officer can be promoted. Once confirmed, the nominee is promoted to that rank on assuming a position of office that requires an officer to hold the rank. For positions of office that are reserved by statute, the President nominates an officer for appointment to fill that position. For all three of the applicable uniformed services, because the grade of major general is a permanent rank, the nominee may still be screened by an in-service promotion board to add their input on the nominee before the nomination can be sent to the Senate for approval. Since the grade of major general is permanent, the rank does not expire when the officer vacates a two-star position. Tour length varies depending on the position, by statute, and/or when the officer receives a new assignment or a promotion, but the average tour length per two-star billet is two to four years.

Other than voluntary retirement, statute sets a number of mandates for retirement of general officers (called flag officers in the Navy and Coast Guard). All major generals must retire after five years in grade or 35 years of service, whichever is later, unless appointed for promotion or reappointed to grade to serve longer.[9] Otherwise, all general officers must retire the month after their 64th birthday.[10] However, the Secretary of Defense may defer a general officer's retirement until the officer's 66th birthday and the President may defer it until the officer's 68th birthday. Because there are a finite number of General Officer positions, one officer must retire before another can be promoted. As a result, general officers typically retire well in advance of the statutory age and service limits, so as not to impede the upward career mobility of their juniors. 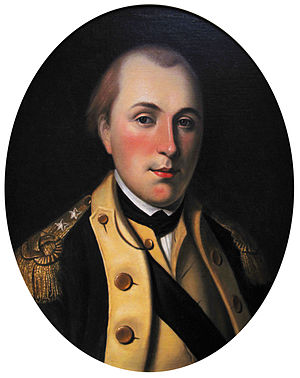 Lafayette in a uniform of a major general of the Continental Army.

Until the American Civil War, major general was the highest rank that could be attained by an officer in the U.S. Army, though Winfield Scott had been given the brevet rank of lieutenant general[13] in 1855. This was a consequence of the fact that at his death George Washington was officially listed as holding the rank of lieutenant general, rather than full general, and it was regarded as improper for an officer to hold a rank equal to or superior to Washington's. To address this anomaly, Washington was posthumously promoted by Congress to the rank of General of the Armies of the United States in 1976.

The position of Major General Commanding the Army was entitled to wear three stars according to General Order No. 6 of March 13, 1861.[14] When Ulysses S. Grant was appointed lieutenant general on March 9, 1864,[15] and took command of the Union forces, he used the three-star insignia formerly assigned to that position.

The Confederate States Army maintained a similar rank of major general, usually associated with the command of a division, while lieutenant generals often commanded corps and full generals led armies as a general convention.