Makhachkala (Russian: Махачкала; IPA: [məxəʂkɐˈla]; Lak: Гьанжи; Avar: МахӀачхъала; Lezgian: Магьачкъала; Rutul: МахаӀчкала; Kumyk: Магьачкъала, Mahačqala; Azerbaijani: Mahaçqala), “Fort Maghach”, is the capital city of the Republic of Dagestan, Russia. It is located on the western shore of the Caspian Sea and is home to the Makhachkala Grand Mosque, one of Russia’s largest. As of the 2010 Census, the city had a population of 572,076, making it the largest in the North Caucasus Federal District.[4] The city has an ethnic plurality, with the Avars and Laks as the largest groups.

Founded as a fortress of the Russian Empire in 1844 and given city status thirteen years later, the city bore the name of the Russian Tsar Peter the Great until 1921. Since the fall of the Soviet Union, Makhachkala has been affected by Islamist insurgents as part of a republic-wide conflict. 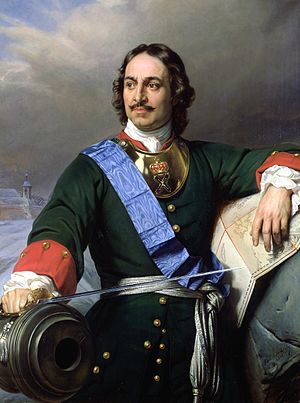 Russian Tsar Peter the Great visited what is now Makhachkala in 1722, and the settlement bore his name from 1844 to 1921

Makhachkala's historic predecessor was the town of Tarki, now a nearby suburb, whose history goes back to the 15th century and possibly much earlier. The modern city of Makhachkala was founded in 1844 as a fortress; town status was granted in 1857. The original Russian name of the city was Petrovskoye (Петро́вское)—after the Russian Tsar Peter the Great who visited the region in 1722 during his Persian Campaign. However, among the locals it was known as Anzhi-Qala, The Pearl Fortress (Qala means fortress, while Anzhi means pearl in Kumyk). After gaining city status, the Petrovskoye fortress was renamed Petrovsk-Port (Петро́вск-Порт) in 1857, sometimes simply Petrovsk.[7] In 1894, a railway line linked the city to Vladikavkaz (in present-day North Ossetia-Alania) and Baku (in present-day Azerbaijan), yet a report from 1904 detailed the spread of malaria and unsuitable drinking water in the city.[9]

In January 1919, during the Russian Civil War, the British No. 221 Squadron Royal Air Force based themselves at Petrovsk. In March they were joined by No. 266 Squadron and both squadrons were involved in bombing operations against Bolshevik forces in Astrakhan and elsewhere. In August 1919 both squadrons were withdrawn from Petrovsk.[10] The city was invaded by the Red Army in Spring 1920.[9]

As part of the Soviet revolution, place names relating to monarchy or religion were changed, and thus on 14 May 1921, Petrovsk was renamed Makhachkala, after Dagestani revolutionary Magomed-Ali 'Makhach' Dakhadaev. On the same day, it became capital of the newly formed Dagestan Autonomous Soviet Socialist Republic.[9] The city incurred major damage during an earthquake on 14 May 1970.[11]

The area was used as a Soviet-era naval testing station, leaving behind a curious sea fort off nearby Kaspiysk.[12]Lua error in Module:Coordinates at line 668: callParserFunction: function "#coordinates" was not found.

A report of the International Crisis Group from 2013 describes the city as being "a city of almost one million and gained spectacular economic resources due to a construction boom, skyrocketing land prices, substantial federal funds for reconstruction, infrastructure, transport, housing, courts and administrative services. But even a short visit revealed acute problems, including dirty streets, dilapidated buildings, inadequate utilities, hectic construction, lack of planning and poorly organised public transport".[13]

The coat of arms and flag of Makhachkala were adopted on 15 December 2006. The coat of arms shows the city's historic fortress in silver on a red field, with flames coming from either tower and a solar symbol above. It is supported by a golden eagle on each side, a crown on top, and crossed anchors (representing its maritime history) entangled with grapevines at the bottom. 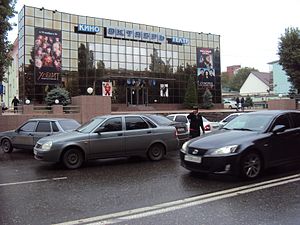 A street in Makhachkala 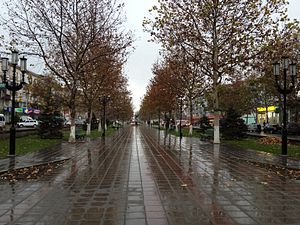 In proportions of 2:3, the flag displays the main shield of the city's coat of arms.[14]

Makhachkala is close to areas of fighting and therefore it and the surrounding region has a heavy security service presence. On 25 November 2011, a protest took place in Makhachkala attended by up to 3,000 people demanding an end to illegal activities perpetrated by the security services.[15]

On December 15, 2011, Gadzhimurat Kamalov, a Russian investigative journalist and founder of the independent Chernovik newspaper was shot dead in an apparent assassination.[16]

The city is served by Uytash Airport, a regional airport providing connections to other Russian cities.

Russian Railways via the North Caucasus Railway provides freight and passenger traffic to and from Makhachkala.

The port offers communications with the rest of Russia, as well as with Belarus, Ukraine, the Baltic states, Iran, Turkey and Central Asia.[17]

A railyard at the port connects the port to the North Caucasus Railway network.[17] 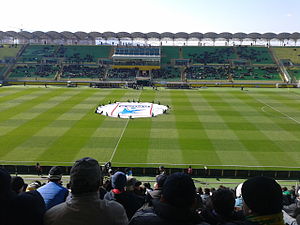 Founded in 1991, the side returned to the Premier League in 2009 and in January 2011 were purchased by Dagestani commodities billionaire Suleyman Kerimov,[19] whose investment has allowed the club to sign players such as Brazilian World Cup winner Roberto Carlos[20] and Cameroonian striker Samuel Eto'o who, during his time at the club, became the world's highest paid player.[21] However, due to recent unrest in the region, the players currently live and train in Moscow, and an armed guard patrols their matches.[22]

The climate of Makhachkala combines subtropical warm summers and a continental climate resulting in cold winters. It is also influenced by a semi-arid climate (Köppen climate classification: BSk) as is found across most of the Caspian Sea basin.

Makhachkala is twinned with: