According to the 2001 Ukrainian Census, the city had 389,589 inhabitants, 178,475 (46%) were men and 211,114 (54%) were women. It is an important steel industry and coal mining centre of the country. Makiivka is a leading metallurgical and coal-mining centre and has machinery and coking plants. Donetsk and Makiivka are practically merged into a conurbation.

The city municipality of Makiivka includes also the following urban-type settlements (Ukrainian spellings are followed by Russian ones in parenthesis):

The mayor of the city is Oleksandr Maltsev (Ukrainian: Мальцев Олександр Миколайович) who was born in Makiivka in 1956.

For a long time Makiivka was thought to have been established in 1777, but recent research shows that it has been mentioned in historical records since approx. 1696[citation needed]. The first mine was opened in 1875. In 1899 metallurgical settlement was founded nearby called Dmytrievsk, named after Dmitry Ilovaisky, son of count Ilovaysky - the landlord of the region.

Makiivka was only a small village when it was combined with nearby Dmytriivsk. Dmytriivsk subsequently developed as one of the largest coal-mining and industrial centres of the Donets Basin coalfield. In 1931, Dmytriivsk-Makiyivka was renamed Makiivka.

In 1939, the Jewish population of Makiivka was 8,000. In the German Operational Situation Report (USSR No. 177) of Nazi Chief of the Security Police dated from March 6, 1942 it is stated that as a result of the measures carried out by Einsatzkommando 6, both the Horlivka and Makiivka districts had been made "free of Jews". Nazis executed a total of 493 people here, among them 80 political agitators, 44 saboteurs and looters, and 369 Jews.

In September 2006, the first synagogue has been consecrated in Makiivka after almost 70 years. The house at 51 Lva Tolstogo street serves not only a synagogue but also a community center for a Jewish community of Makiiivka containing 2,000 members. The main rabbi of Makiivka is Eliyahu Kremer. Makiivka Jewish community chairman is Alexander-Mikhoel Katz. 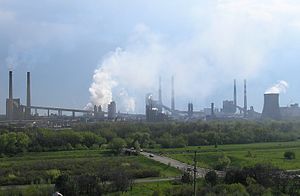 There are many coal mines in and around the city. Makiivka's modern industries include one of the largest integrated iron and steel works in Ukraine. There are also other metalworking and coke-chemical plants and factories for pneumatic machinery, shoemaking, and food processing. The city is rather dispersed, with numerous residential communities surrounding individual industrial plants over an extensive area. It is gradually extending to form a single metropolitan area with the nearby city of Donetsk, which lies just a few miles to the southwest. Makiivka is home to the Donbas National Academy of Civil Engineering and Architecture.

The Makiivka metallurgical plant produced 1.029 million tons of steel and 825,000 tons of pig iron in 2005. It increased production of rolled steel 1.56-fold to over 700,000 tons in the January–July period of 2006, compared with the corresponding period of last year. It aims to increase its sales revenues to 1.265 billion hryvnia in 2006. The Nucor company (United States) intends to sign a contract with the Makiivka metallurgical plant on delivery of pig iron to the company's enterprises in the United States.

Makiivka is crossed by several railway lines: one is the Yasynuvata-Krynichna line (Russian: Ясиноватая-Криничная), and the other is the Mospyno-Makiivka freight line (Russian: Моспино — Макеевка грузовая). The city also contained a tram line (since 1925, but there are no tram routes now since 2006) and a trolleybus system (from 1969).

There are plans to connect trolleybus networks of Donetsk and Makeyevka with direct intercity line to March 2013.

The city has a main passenger station Makiyivka-Pasazhirska, a railway junction Khanzhonkovo (situated in the settlement where Aleksandr Khanzhonkov was born), and minor railway stations:Krynichna, Monakhovo, Makeevka-Gruzovaya as well as a number of railway bays.

On the territory of Makiivka there are 22 churches, 73 religious organisations, and a women's monastery.

Within the city, 35 different forms of sport are played, and there are a total of 35 sport organisations. There are also many campuses of the oblast's sport schools in Makiivka, including schools for: kickboxing, volleyball, heavy athletics, boxing, some other forms of wrestling, and judo.