From Infogalactic: the planetary knowledge core
Jump to: navigation, search
This article is about the icebreaker built in 1912. For other Russian and Soviet icebreakers named Malygin, see Malygin (icebreaker).

Icebreaker Malygin was a Russian and Soviet icebreaker ship of 3,200 tonnes displacement. She was named after Stepan Malygin.

Malygin was built in 1912 as the SS Bruce for the Newfoundland shipping company and sold to Russia in 1915. The ship was originally named Solovei Budemirovich (Соловей Будимирович) after Nightingale the Robber.[citation needed] She was renamed Malygin in 1921.

In 1928, she took part in the search of the Umberto Nobile's dirigible expedition. In 1922-1939, she performed hydrological research in the Arctic Ocean. In July 1931, Professor V. Yu. Vize led an expedition on the Malygin to Franz Josef Land and the northern part of the Kara Sea. Captain D.T. Chertkhov was in command of the Malygin. Other members included technicians whose mission was to locate a suitable place for a Soviet floatplane base in Franz Josef Land. During this expedition German airship Graf Zeppelin made a memorable rendezvous with icebreaker Malygin at Bukhta Tikhaya in Hooker Island, Franz Josef Land.

In 1937, she took part in drifting expedition together with Icebreaker Sadko and Icebreaker Sedov.

The Malygin sank in a storm near Kamchatka on 28 October 1940 with all 98 people on board while returning from a hydrographic expedition. 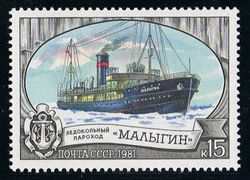