Manatee County is a county in the U.S. state of Florida. As of the 2010 census, the population was 322,833.[1] Its county seat and largest city is Bradenton.[2] The county was created in 1855. It was named for the Florida manatee[3] (commonly called a "sea cow" and distantly related to the elephant), which is endangered and Florida's official marine mammal.

Features of Manatee County include access to the Southern part of Tampa Bay, the Sunshine Skyway Bridge, and the Manatee River. Rowing facilities are being developed in the area and the Upper Manatee River Canoe Trail has been created. There are several parks and preserves.

Every January, the Manatee County Fair takes place at the fairgrounds. 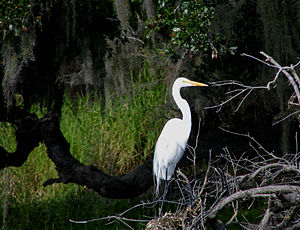 Bealls of Florida has its headquarters in unincorporated Manatee County.[12][13]

Library cards are free to those who reside, own property, attend school, and/or work in Manatee County. Non-residents may obtain a temporary card upon payment of a $20.00 annual fee.[14][15]

The library system provides a variety of services which include adult, young adult, and children's materials, as well as a genealogy section and the Eaton Florida History Reading Room. The libraries also offer extensive programming that includes author luncheons, children's story-times and summer reading programs. Computers for all to use are also provided at all locations, and the library system has licensing to OverDrive, Inc. and Freegal Music. Ask a Librarian, the on-line Florida librarian reference service is available through the Manatee County Public Library System as well.[16]

Public libraries in Manatee County began in the year 1898 with a privately owned rental library was created by Mrs. Julia Fuller in the Mrs. Bass Dry Goods store. The first independent library building in the county was opened in Bradenton in 1907, followed by Palmetto building a Carnegie Library in 1914 and Bradenton doing the same in 1918. For much of the 20th century, libraries in both cities were free to city residents while county residents had to pay a non-resident fee. In 1964, the city library associations in Bradenton and Palmetto merged with the Manatee County government to create what is now known as the Manatee County Public Library System. This was followed by the establishment of a bookmobile for rural areas in late 1964 and a Talking Books program for the blind in 1966.

As demands on the bookmobile grew and the library collection outstripped the existing buildings in Bradenton and Palmetto, the first branch of the Manatee County Public Library system was built in Bayshore in 1967, followed by a new branch on East Ninth Street in 1969 and an Island branch in 1971, the last of which later moved into a new building in 1983. A new building for the Palmetto Library was built in 1969, eventually followed by the modern Central Public Library in downtown Bradenton in 1978.

The 1990s saw a period of rapid growth for Manatee County, and the library system grew to accommodate, with the Braden River, Rocky Bluff, and South Manatee branches opening in 1991, 1994, and 1998, respectively, and the Braden River branch subsequently moved to a new building in 1997, bringing the Manatee County Library System to its modern state. 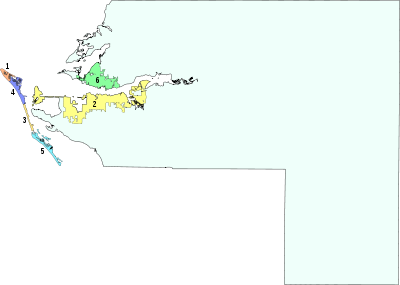