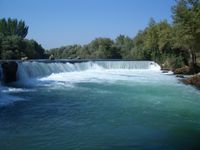 Manavgat River (also called Til and Melas in old historical texts) originates on the eastern slopes of Western Taurus Mountains in Turkey, and flows south over conglomerated strata for about 90 km, then over the Manavgat Waterfall and through the coastal plain and into the Mediterranean Sea. There are many caves in the river watershed area, the most interesting being the Altınbeşik cave.[1]

The maximum flow of the Manavgat River is 500 m³/second, with an average of 147 m³/second. Using the average flow as a measure, the Manavgat River accounts for a very small amount of the water flowing into the Mediterranean. There are two dams over the river: Oymapınar Dam and the Manavgat Dam.[2] Studies have shown that water drains into the Manavgat River basin from its surface watershed and also from endorheic basins, especially those to the east of the river.[3]

In 1992, the Turkish State Hydraulics Work (DSI) was given the job of developing a water supply project for domestic use from the Manavgat river.[4]