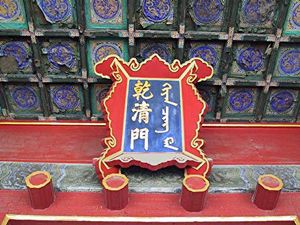 Chinese (left) and Manchu (right) writing in the Forbidden City

The Manchu alphabet is the alphabet used to write the now nearly-extinct Manchu language; a similar script is used today by the Xibe people, who speak a language variably considered as either a dialect of Manchu or a closely related, mutually intelligible, language. It is written vertically from top to bottom, with columns proceeding from left to right.

According to the Veritable Records (Manchu:

manju-i yargiyan kooli; Chinese: 滿洲實錄; pinyin: Mǎnzhōu Shílù), in 1599 the Manchu leader Nurhaci decided to convert the Mongolian alphabet to make it suitable for the Manchu people. He decried the fact that while illiterate Han Chinese and Mongolians could understand their respective languages when read aloud, that was not the case for the Manchus, whose documents were recorded by Mongolian scribes. Overriding the objections of two advisors named Erdeni and G'ag'ai, he is credited with adapting the Mongolian script to Manchu. The resulting script was known as tongki fuka akū hergen ("script without dots and circles").

In 1632, Dahai added diacritical marks to clear up a lot of the ambiguity present in the original Mongolian script; for instance, a leading k, g, and h are distinguished by the placement of no diacritical mark, a dot, and a circle respectively. This revision created the Standard script, known as tongki fuka sindaha hergen ("script with dots and circles"). As a result, the Manchu alphabet contains little ambiguity. Recently discovered manuscripts from the 1620s make clear, however, that the addition of dots and circles to Manchu script began before their supposed introduction by Dahai.

The Manchu alphabet was also used to write Chinese. Manchu: a textbook for reading documents, by Gertraude Roth Li, contains a list comparing a romanization of Chinese syllables written in Manchu compared to pinyin and Wade Giles.[4] Using the Manchu script to transliterate Chinese words is a source of loanwords for the Xibe language.[5] Several Chinese-Manchu dictionaries contain Chinese characters transliterated with Manchu script and the Manchu version of the Thousand Character Classic is actually the Manchu transcription of all the Chinese characters. Also existing as a transliteration was the Manchu version of the Hong Loumeng (紅樓夢).[6]

Manchus learned their script also like a syllabary, with syllables divided into twelve different classes based on their finals' phonemes. Today, the opinion on whether it is alphabet or syllabic in nature is still split between different experts. In China, it is considered syllabic and Manchu is still taught in this manner, while in the West it is treated like an alphabet. The alphabetic approach is used mainly by foreigners who want to learn the language, as studying the Manchu script as a syllabary takes a longer time.[8][9]

The Manchus, like the Mongolians, taught their script as a syllabary and divided them into twelve classes of syllables, based on the ending phoneme of each syllable. Foreigners on the other hand learn Manchu script like an alphabet.

Despite the alphabetic nature of its script, Manchu was not taught phoneme by phoneme per letter like western languages are, rather, Manchu children were taught to memorize all the syllables in the Manchu language separately as they learned to write, like Chinese characters. Manchus when learning, instead of saying I, a---la; I, o---lo; &c., were taught at once to say la, lo, &c. Many more syllables than are contained in their syllabary might have been formed with their letters, but they were not accustomed to arrange them otherwise than as they there stand. They made, for instance, no such use of the consonants I, m, n, and r, as westerners do when they called them liquid; hence if the Manchu letters s, m, a, r, t, be joined in that order as a Manchu would not able to pronounce them as English speaking people pronounce the word smart.[10] Manchu children were taught the language via the syllabic method.[11]

The Manchu alphabet has two kinds of punctuation: two dots (᠉), analogous to a period; and one dot (᠈), analogous to a comma. However, with the exception of lists of nouns being reliably punctuated by single dots, punctuation in Manchu is inconsistent, and therefore not of much use as an aid to readability.[15]

The Jurchens of a millennium ago became the ancestors of the Manchus when Nurhaci united the Jianzhou Jurchens (1593-1618) and his son subsequently renamed the consolidated tribes as the "Manchu". Throughout this period, the Jurchen language evolved into what we know as the Manchu language. Its script has no relation to the Manchu alphabet, however, as their script was derived from the Khitan script, which was in turn derived from Chinese characters.