The Mandukya Upanishad (Sanskrit: माण्डुक्य उपनिषद्, Māṇḍukya Upaniṣad) is the shortest of all the Upanishads, and is assigned to Atharvaveda.[1] It is listed as number 6 in the Muktikā canon of 108 Upanishads.[2]

It is in prose, consisting of twelve terse verses, and is associated with a Rig Vedic school of scholars.[1] It discusses the syllable Om, presents the theory of four states of consciousness, asserts the existence and nature of Atman (Soul, Self).[3][4]

The Mandukya Upanishad is notable for having been recommended in the Muktikā Upanishad, through two central characters of the Ramayana, as the one Upanishad that alone is sufficient for knowledge to gain moksha, and as first in its list of eleven principal Upanishads.[2] The text is also notable for inspiring Gaudapada's Karika, a classic for the Vedanta school of Hinduism.[2] Mandukya Upanishad is among the oft cited texts on chronology and philosophical relationship between Hinduism and Buddhism.[5][6]

The root of Mandukya is sometimes considered as Manduka (Sanskrit: मण्डूक) which literally has several meanings. It means "frog", "a particular breed of horse", "the sole of horse's hoof", or "a kind of coitus".[7] Some writers[8] have suggested the "frog" as the etymological root for Mandukya Upanishad.

Another root for the Upanishad's name is Mānduka (Sanskrit: माण्डूक) which literally is "a Vedic school" or means "a teacher".[9] Paul Deussen states the etymological roots of Mandukya Upanishad to be a "half lost school of Rigveda".[1] This school may be related to the scholar named Hrasva Māṇḍūkeya, whose theory of semivowels is discussed in Aitareya Aranyaka of Rigveda.[10]

Applying the rules of sandhi, the text is also called Mandukyopanishad.[11]

The chronology of Mandukya Upanishad, like other Upanishads, is uncertain and contested.[12] The chronology is difficult to resolve because all opinions rest on scanty evidence, an analysis of archaism, style and repetitions across texts, driven by assumptions about likely evolution of ideas, and on presumptions about which philosophy might have influenced which other Indian philosophies.[12][13]

Mahony, on the other hand, states that Mandukya Upanishad probably emerged in the late fifth and early fourth centuries BCE, along with Prashna and Maitri Upanishads.[17] Phillips lists Mandukya Upanishad before and about the time the Shvetashvatara Upanishad, the Maitri Upanishad, as well as the first Buddhist Pali and Jaina canonical texts were composed.[12] Ranade[18] posits a view similar to Phillips, placing Mandukya's chronological composition in the fifth, that is the last group of ancient Principal Upanishads.

The foundation of several theories in the Mandukya Upanishad are found in chronologically more ancient Sanskrit texts.[19] For example, chapters 8.7 through 8.12 of Chandogya Upanishad discuss the "four states of consciousness" as awake, dream-filled sleep, deep sleep, and beyond deep sleep.[19][20]

The text of the Mandukya Upanishad is fully incorporated in the Mandukya Karika, a commentary attributed to the 6th century CE[21] Gaudapada, and is not known to exist independent of this commentary.[11] Isaeva states that some scholars, including Paul Deussen, presumed that Gaudapada may be its author; however, there is no historical or textual evidence for this hypothesis.[11] Scholars consider Mandukya Upanishad as a Principal Upanishad with more ancient origins.[12][13]

In contrast to the older Upanishads, the Mandukya Upanishad is very short, with clear and concise formulations.[22][23] It has twelve terse prose paragraphs.[4]

The Mandukya Upanishad is an important Upanishad in Hinduism, particularly to its Advaita Vedanta school.[24][25] It tersely presents several central doctrines, namely that "the universe is Brahman," "the self (soul, atman) exists and is Brahman," and "the four states of consciousness".[24][26][27] The Mandukya Upanishad also presents several theories about the syllable Om, and that it symbolizes self.[24][4]

Aum in the Mandukya Upanishad 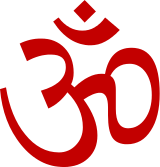 The Mandukya Upanishad is one of several Upanishads that discuss the meaning and significance of the syllable Om (Aum).

The Mandukya Upanishad opens by declaring, "Om!, this syllable is this whole world". Thereafter it presents various explanations and theories on what it means and signifies.[4] This discussion is built on a structure of "four fourths" or "fourfold", derived from A + U + M + "silence" (or without an element[28]).[3][4]

Aum as all states of time

In verse 1, the Upanishad states that time is threefold: the past, the present and the future, that these three are "Aum". The four fourth of time is that which transcends time, that too is "Aum" expressed.[4]

Aum as all states of Atman

In verse 2, states the Upanishad, everything is Brahman, but Brahman is Atman (the soul, self), and that the Atman is fourfold.[3]

Aum as all states of consciousness

In verses 3 to 6, the Mandukya Upanishad enumerates four states of consciousness: wakeful, dream, deep sleep and the state of ekatma (being one with Self, the oneness of Self).[4] These four are A + U + M + "without an element" respectively.[4]

Aum as all of etymological knowledge

In verses 9 to 12, the Mandukya Upanishad enumerates fourfold etymological roots of the syllable "Aum". It states that the first element of "Aum" is A, which is from Apti (obtaining, reaching) or from Adimatva (being first).[3] The second element is U, which is from Utkarsa (exaltation) or from Ubhayatva (intermediateness).[4] The third element is M, from Miti (erecting, constructing) or from Mi Minati, or apīti (annihilation).[3] The fourth is without an element, without development, beyond the expanse of universe. In this way, states the Upanishad, the syllable Om is the Atman (the self) indeed.[3][4]

Theory and nature of Atman

Verse 3 of the Upanishad describes the first state of Self as outwardly cognitive with seven limbs,[32] nineteen mouths,[33] enjoying the gross,[34] a state of Self common in all of human beings.[3][4]

The Mandukya Upanishad, in verse 4, asserts the second state of Self as inwardly cognitive with seven limbs, nineteen mouths, enjoying the exquisite, a state of brilliant Self.[3][4]

The Upanishad's verse 5 states the third state of Self as one without desire or anticipations, where pure conscience is his only mouth, where he is in unified cognition, enjoying the delight, a state of blissful Self.[3][4]

Johnston summarizes these four states of Self, respectively, as seeking the physical, seeking inner thought, seeking the causes and spiritual consciousness, and the fourth state is realizing oneness with the Self, the Eternal.[35]

Similarities and differences with Buddhist teachings

Scholars contest whether Mandukya Upanishad was influenced by Buddhist theories along with the similarities and differences between Buddhism and Hinduism in light of the text. According to Hajime Nakamura, the Mandukya Upanishad was influenced by Mahayana Buddhism and its concept of śūnyatā.[5] Nakamura states, "many particular Buddhist terms or uniquely Buddhist modes of expression may be found in it",[36][note 1] such as adrsta, avyavaharya, agrahya, alaksana, acintya, prapancopasama.[38] According to Randall Collins the Madukya Upanishad "includes phrases found in the Prajnaparamitrasutras of Mahayana Buddhism."[39]

According to Michael Comans, Vidushekhara also notes that the term prapañcopaśama does not appear in pre-Buddhist Brahmanic works, but in contrast to Nakamura he does not conclude that the term was taken over from Mahayana Buddhism.[6] According to Comans, eventual Mahayana origins of this term are no more than a possibility, and not a certainty.[6]

Comans also disagrees with Nakamura's thesis that "the fourth realm (caturtha) was perhaps influenced by the Sunyata of Mahayana Buddhism."[note 2] According to Comans,

It is impossible to see how the unequivocal teaching of a permanent, underlying reality, which is explicitly called the "Self", could show early Mahayana influence.[40]

Comans further refers to Nakamura himself, who notes that later Mahayana sutras such as the Laṅkāvatāra Sūtra and the concept of Buddha-nature, were influenced by Vedantic thought.[40] Comans concludes that

[T]here can be no suggestion that the teaching about the underlying Self as contained in the Mandukya contains shows any trace of Buddhist thought, as this teaching can be traced to the pre-Buddhist Brhadaranyaka Upanishad.[40]

Jacobs lists adrsta and other terms in more ancient, pre-Buddhist literature such as the Brihadaranyaka Upanishad.[41]

Isaeva states that there are differences in the teachings in the texts of Buddhism and the Mandukya Upanishad of Hinduism, because the latter asserts that citta "consciousness" is identical with the eternal and immutable atman "soul, self" of the Upanishads.[42] In other words, Mandukya Upanishad and Gaudapada affirm the soul exists, while Buddhist schools affirm that there is no soul or self.[4][43][44]

The Mandukya alone is sufficient
for the deliverance of the aspirant,
if even then, the knowledge lacks,
then read the ten Upanishads.

He attains the goal
if he reads the thirty two Upanishads,
if you just wish deliverance, while death is near,
read, then, the hundred and eight Upanishads.

One of the first known extant metrical commentary on this Upanishad was written by Gaudapada, This commentary, called the Māndūkya-kārikā, is the earliest known systematic exposition of Advaita Vedanta.

Raju states that Gaudapada took over the Buddhist doctrines that ultimate reality is pure consciousness (vijñapti-mātra),[45][note 3] and "the four-cornered negation".[45][note 4] Raju further states that Gaudapada "weaved [both doctrines] into a philosophy of the Mandukaya Upanisad, which was further developed by Shankara".[49][note 5] The 'four-cornered negation' is an English gloss of the Sanskrit, Chatushkoti.[citation needed]

Madhvacharya, the proponder of Dvaita Vedanta, has written commentaries on Mandukya upanishad and offers an emotional and thestic perspective of the scripture, and attributes them to Śruti, his commentary based on bhakti yoga and uses Vishnu and his attributes as a similes for decephering sholokas of mandukya upanishad [52]

According to Sikh scholars, the Mandukya Upanishad 'is one of the most fascinating upanishads ever written as it deals with the four states of being' and was translated in Anandpur in 1689 under the patronage of Guru Gobind Singh.[citation needed]

According to Aurobindo, Brahman, which has the potentiality of becoming, has created out an existence which has a relation between itself. This existence with its experience of becoming and having relation with the absolute is called as Soul or purusha, the principle or power of becoming is called as nature or prakriti.[53][relevant? – discuss]

Swami Rama has provided an interpretation of this Upanishad from the experiential standpoint in his commentary Enlightenment without God.[54]

Ranade calls the aphoristic style of Mandukya Upanishad as highly influential on the Sutras of Indian philosophies that followed it, and that the Upanishad has served as a foundational text of the major Vedanta school of Hinduism. He states,[55]

We are told [in Mandukya Upanishad] how, "the syllable Om is verily all that exists. Under it is included all the past, the present and the future, as well as that which transcends time. Verily all this is Brahman. The Atman is Brahman. This Atman is four-footed. The first foot is the Vaisvanara, who enjoys gross things, in the state of wakefulness. The second foot is the Taijasa, who enjoys exquisite things in the state of dream. The third is the Prajna who enjoys bliss in the state of deep sleep. The fourth is Atman, who is alone without a second, calm, holy and tranquil". This passage has been verily the basis upon which all the later systems of Vedantic philosophy have come to be built.

Ranade's views on the importance of Mandukya Upanishad and Gaudapada's commentary on Vedanta school, particularly Advaita Vedanta sub-school of Hinduism, is shared by modern era scholars such as Hacker, Vetter and others.[56]

Johnston states that Mandukya Upanishad must be read in two layers, consciousness and vehicles of consciousness, soul and nature of soul, the empirical and the eternal.[35] The text aphoristically condenses these layers of message, both in literal and metaphorical sense.

William Butler Yeats, the Irish poet, was inspired by the Upanishads and Mandukya Upanishad were among texts he commented on.[57][58]

David Stoll's 1987 Piano Quartet is inspired by three Upanishads, one being Mandukya Upanishad, other two being Katha and Isha Upanishads.[59]