Manfred von Ardenne (20 January 1907 – 26 May 1997) was a German researcher and applied physicist and inventor. He took out approximately 600 patents in fields including electron microscopy, medical technology, nuclear technology, plasma physics, and radio and television technology. From 1928 to 1945, he directed his private research laboratory Forschungslaboratorium für Elektronenphysik. For ten years after World War II, he worked in the Soviet Union on their atomic bomb project and was awarded a Stalin Prize. Upon his return to the then East Germany, he started another private laboratory, Forschungsinstitut Manfred von Ardenne.

The stormy life of von Ardenne's grandmother, Elisabeth von Ardenne (1853–1952), is said to have been be the inspiration for Effi Briest by Theodor Fontane, one of the most famous German realist novels.

Born in 1907 in Hamburg to a wealthy aristocratic family, Ardenne was the oldest of five children. In 1913, Ardenne's father, assigned to the Kriegsministerium, moved to Berlin. From Ardenne's earliest youth, he was intrigued by any form of technology, and this was fostered by his parents. Ardenne's early education was at home through private teachers. In Berlin, from 1919, Ardenne attended the Realgymnasium, where he pursued his interests in physics and technology. In a school competition, he submitted models of a camera and an alarm system, for which he was awarded first place.[1][2]

In 1923, at the age of 15, he received his first patent for an electronic tube with multiple (three) systems in a single tube for applications in wireless telegraphy. At this time, Ardenne prematurely left the Gymnasium to pursue the development of radio engineering with the entrepreneur Siegmund Loewe, who became his mentor. Loewe built the inexpensive Loewe-Ortsempfänger OE333 with Ardenne's multiple system electronic tube. In 1925, from patent sales and publication income, Ardenne substantially improved the broadband amplifier (resistance-coupled amplifier), which was fundamental to the development of television and radar.[1]

Without an Abitur, because he did not graduate from the Gymnasium, Ardenne entered university-level study of physics, chemistry, and mathematics. After four semesters, he left his formal studies, due to the inflexibility of the university system, and educated himself; he became an autodidact and devoted himself to applied physics research.[1]

In 1928, he came into his inheritance with full control as to how it could be spent, and he established his private research laboratory Forschungslaboratorium für Elektronenphysik,[3] in Berlin-Lichterfelde, to conduct his own research on radio and television technology and electron microscopy. He invented the scanning electron microscope.[4][5] He financed the laboratory with income he received from his inventions and from contracts with other concerns. For example, his research on nuclear physics and high-frequency technology was financed by the Reichspostministerium (RPM, Reich Postal Ministry), headed by Wilhelm Ohnesorge. M von Ardenne attracted top-notch personnel to work in his facility, such as the nuclear physicist Fritz Houtermans, in 1940. Ardenne also conducted research on isotope separation. The small list of equipment Ardenne had in the laboratory is impressive for a private laboratory. For example, when on 10 May 1945 he was visited by NKVD Colonel General V. A. Makhnjov, accompanied by Soviet physicists Isaak Kikoin, Lev Artsimovich, Georgy Flyorov, and V. V. Migulin (of the Russian Alsos operation), they praised the research being conducted and the equipment, including an electron microscope, a 60-ton cyclotron, and plasma-ionic isotope separation installation.[1][6][7] 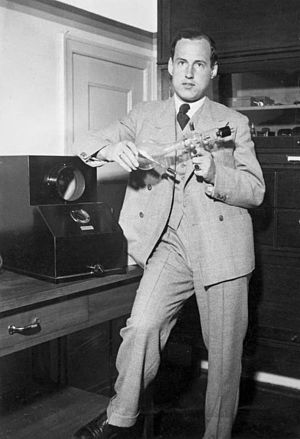 At the Berlin Radio Show in August 1931, Ardenne gave the world's first public demonstration of a television system using a cathode ray tube for both transmission and reception. (Ardenne never developed a camera tube, using the CRT instead as a flying-spot scanner to scan slides and film.)[8][9][10] Ardenne achieved his first transmission of television pictures on 24 December 1933, followed by test runs for a public television service in 1934. The world's first electronically scanned television service then started in Berlin in 1935, culminating in the live broadcast of the 1936 Summer Olympic Games from Berlin to public places all over Germany.[1]

In 1937, Ardenne developed the scanning transmission electron microscope. During World War II, he took part in the study and application of radar.[1]

In 1941 the "Leibniz-Medaille (de)" of the "Preußische Akademie der Wissenschaften" was awarded to Ardenne, and in January 1945, he received the title of "Reichsforschungsrat" (Empire Research Advisor).[11]

Von Ardenne, Gustav Hertz, Nobel laureate and director of Research Laboratory II at Siemens, Peter Adolf Thiessen, ordinarius professor at the Humboldt University of Berlin and director of the Kaiser-Wilhelm Institut für physikalische Chemie und Elektrochemie (KWIPC) in Berlin-Dahlem, and Max Volmer, ordinarius professor and director of the Physical Chemistry Institute at the Berlin Technische Hochschule, had made a pact. The pact was a pledge that whoever first made contact with the Soviets would speak for the rest. The objectives of their pact were threefold: (1) Prevent plunder of their institutes, (2) Continue their work with minimal interruption, and (3) Protect themselves from prosecution for any political acts of the past.[12] Before the end of World War II, Thiessen, a member of the NSDAP, had Communist contacts.[13] On 27 April 1945, Thiessen arrived at von Ardenne's institute in an armored vehicle with a major of the Soviet Army, who was also a leading Soviet chemist, and they issued Ardenne a protective letter (Schutzbrief).[14]

All four of the pact members were taken to the Soviet Union. Von Ardenne was made head of Institute A,[15] in Sinop,[16][17] a suburb of Sukhumi. In his first meeting with Lavrentij Beria, von Ardenne was asked to participate in the Soviet atomic bomb project, but von Ardenne quickly realized that participation would prohibit his repatriation to Germany, so he suggested isotope enrichment as an objective, which was agreed to.

Others at Institute A included Ingrid Schilling, Alfred Schimohr, Gerhard Siewert, and Ludwig Ziehl.[18] By the end of the 1940s, nearly 300 Germans were working at the institute, and they were not the total work force.[19]

Hertz was made head of Institute G,[20] in Agudseri (Agudzery),[16][17] about 10 km southeast of Sukhumi and a suburb of Gul’rips (Gulrip'shi); after 1950, Hertz moved to Moscow. Volmer went to the Nauchno-Issledovatel'skij Institut-9 (NII-9, Scientific Research Institute No. 9),[21] in Moscow; he was given a design bureau to work on the production of heavy water.[22] In Institute A, Thiessen became leader for developing techniques for manufacturing porous barriers for isotope separation.[23]

At the suggestion of authorities, Ardenne eventually shifted his research from isotope separation to plasma research directed towards controlled nuclear fusion.[24]

In 1947, Ardenne was awarded a Stalin Prize for his development of a table-top electron microscope. In 1953, before his return to Germany, he was awarded a Stalin Prize, first class, for contributions to the atomic bomb project; the money from this prize, 100,000 Rubles, was used to buy the land for his private institute in East Germany. According to an agreement that Ardenne made with authorities in the Soviet Union soon after his arrival, the equipment which he brought to the Soviet Union from his laboratory in Berlin-Lichterfelde was not to be considered as "reparations" to the Soviet Union. Ardenne took the equipment with him in December 1954 when he returned to the then East Germany.[1][25] 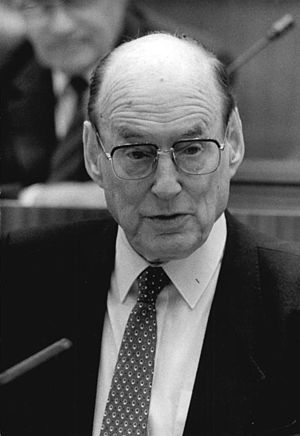 Ardenne speaks to the Volkskammer (1986)

After Ardenne's arrival in the Deutsche Demokratische Republik (DDR), he became "Professor für elektrotechnische Sonderprobleme der Kerntechnik" (Professor of electrotechnical special problems of Nuclear Technology) at the Technische Hochschule Dresden. He also founded his research institute, "Forschungsinstitut Manfred von Ardenne", in Dresden, which with over 500 employees became a unique institution in East Germany as a leading research institute that was privately run. However it collapsed with substantial debts after German reunification in 1991 and re-emerged as Von Ardenne Anlagentechnik GmbH. Ardenne twice won the GDR's National Prize.[1]

In 1957, Ardenne became a member of the "Forschungsrat" of the DDR. In that year, he developed an endoradiosonde for medical diagnostics. In 1958, he was awarded the "Nationalpreis" of the DDR; the same year he became a member of the "Friedensrat". In 1959, he received a patent for the electron-beam furnace he developed. In 1961, he was selected a chairman of the "Internationale Gesellschaft für medizinische Elektronik und biomedizinische Technik". From the 1960s, he expanded his medical research and became well known for his oxygen multi-step therapy and cancer multi-step therapy.[1][26][27][28]

After the creation of the Dresden-Hamburg city partnership (1987), Ardenne became an honorary citizen of Dresden in September 1989.[1]

In 1937, Ardenne married Bettina Bergengruen; they had four children.[1]