Mao Anying (Chinese: 毛岸英; pinyin: Máo Ànyīng; 24 October 1922 – 25 November 1950) was the eldest son of Mao Zedong and Yang Kaihui. Educated in Moscow and a veteran of multiple wars, he was killed in action by an air strike during the Korean War.

Mao Anying was born in an American Christian hospital in Changsha, Hunan Province. His mother, Yang Kaihui was executed by the Kuomintang in 1930. He and his younger brother, Mao Anqing, escaped to Shanghai, where they attended a kindergarten run by the Communist underground. In Shanghai, they lived with Pastor Dong Jianwu (董健吾), who was a Communist party member.[1] 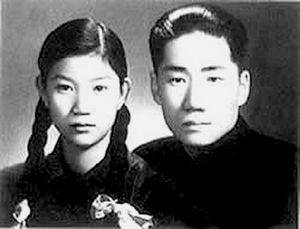 Anying and his brother Anqing later studied at Interdom in the Soviet Union, under the name "Sergei Yun Fu".[2]

During the Second World War, Anying and his brother Anqing joined the Russian Red Army as a show of international Marxist solidarity. Anying served as an artillery officer in the fight against Nazi Germany in Poland.[3]

Mao was Peng Dehuai's secretary[clarification needed] and Russian translator in the Chinese People's Volunteer Army at the time of his death.[4] He was stationed in the army headquarters with Peng Dehuai in caves near an old gold mining settlement, which offered excellent protection from United Nations air attacks. The evening of 24 November 1950, two P-61 Black Widows were spotted on a photo reconnaissance mission by the Chinese on the ground near the location.[5] The next day on 25 November at around noon, a South African Air Force A-26 bomber dropped four napalm bombs,[6] one of which hit a makeshift house near the cave, killing Mao Anying and another officer who were cooking their lunch in violation of war-time regulations of Chinese Army.[1][5][7]

Mao was buried in Pyongyang, in the Cemetery for the Heroes of the Chinese People's Volunteer Army though some also claim that his body was later shipped to Beijing. It is believed that Peng Dehuai's fall from grace after the Great Leap Forward and further humiliation in the Cultural Revolution was due at least in part to Mao Zedong's hatred for Peng's carelessness in protecting the life of his son, Mao Anying.