From Infogalactic: the planetary knowledge core
Jump to: navigation, search
For the historian, see Margaret MacMillan. 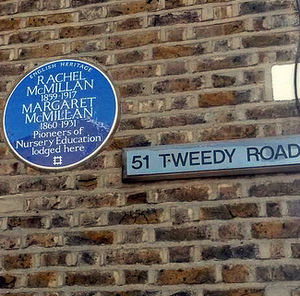 Margaret McMillan (20 July 1860 – 27 March 1931) was a Christian Socialist (Simkin 1997)[clarification needed] and member of the Fabian Society. Working in deprived districts, notably Bradford and Deptford, she agitated for reforms to improve the health of young children, wrote several books on nursery education and pioneered a play-centred approach that has only latterly found wide acceptance.[1]

Margaret McMillan, was born to James and Jean McMillan in Westchester County, New York, on 20 July 1860. Her parents, were from Inverness but had emigrated to the United States in 1840. When she was four, an epidemic of Scarlet fever killed her father and sister and left Margaret deaf (she recovered her hearing at the age of fourteen). Thereupon Mrs. McMillan returned to Scotland with her daughters Margaret and Rachel McMillan, where both attended the Inverness High School. Jean McMillan died in 1877. Margret went on to study Psychology and Physiology, followed by Languages and Music in Germany. .[2]

In 1887 Rachel was introduced to Christian socialism and read articles by William Morris and William Thomas Stead and after July 1888 joined her sister in London. Here she converted Margaret to socialism and they together attended political meetings, where they met William Morris, H. M. Hyndman, Peter Kropotkin, William Stead and Ben Tillett. In 1889, Rachel and Margaret helped the workers during the London Dock Strike. In 1892 they moved to Bradford. There they joined the Fabian Society, the Labour Church, the Social Democratic Federation and the Independent Labour Party (ILP).

With Bradford's school medical officer, Dr. James Kerr, Margaret carried out the first medical inspection of elementary school children in Britain. They published a report and began a campaign for local authorities to install bathrooms, improve ventilation and supply free school meals for children, after seeing the success of Bradford Cinderella Club providing a warm meal to underprivileged children.

In 1902 the sisters joined the recently formed Labour Party, working with James Keir Hardie and George Lansbury. Margaret began to write books on health and education. In 1904 she published her most important books, Education Through the Imagination and The Economic Aspects of Child Labour and Education. Through their work and campaigning together with Katharine Glasier, the House of Commons passed the 1906 Provision of School Meals Act.

In 1908 Margaret and Rachel McMillan opened England’s first school clinic at Bow followed by the Deptford Clinic in 1910. A Night Camp where slum children could wash and wear clean nightclothes followed. In The Child and the State published in 1911, Margaret argued that schools should be offering a broad and humane education instead of preparing children for unskilled, monotonous jobs.

Both Rachel and Margaret campaigned for Universal suffrage and while protesting the way Women's Social and Political Union members were treated in prison through the Cat and Mouse Act, were physically assaulted by police.

In 1914 they founded the Open-Air Nursery School & Training Centre in Deptford for children from eighteen months to seven years and for adult trainees. In addition, Margaret McMillan would invite personalities like Bernard Shaw and Walter de la Mare to speak to audiences in Deptford. Then on 25 March 1917 Rachel McMillan died. Although devastated by the loss of her sister, Margaret continued the run the Nursery, which she named the Rachel McMillan College after her sister. Margaret McMillans nursery in Deptford was the first to receive LEA funding in 1917.[3]

In 1922 she was brought in touch with the work of Rudolf Steiner through Prof Millicent Mackenzie and joined the initiative Educational Union for the Realization of Spiritual Values in Education, becoming one of the organisers and presiding over the 1923 conference in Ilkley where Rudolf Steiner held the lecture cycle The New Art of Education. He had a personal discussion with her, visited her at the College and profoundly acknowledged the work she was doing, referring to her as an educational genius in his subsequent report. She, in turn, was deeply impressed by him, visited Dornach in Switzerland and saw the first Waldorf school.[4] In a letter to her friend Margaret Sutcliffe she writes:

"He walked from shelter to shelter, and wherever he went the children welcomed him. He looked on at their work like a companion. To the students he spoke only a few halting words. To the other guests almost nothing. Yet no other visitor ever left so powerful an influence. Later we saw him at Dornach, surrounded by adoring crowds who had come from every European country..." [5]

She remained connected with the work of Anthroposophy and assisted the growing Steiner school’s movement.

Later in life she became interested in the subject of nursing and established the Rachel McMillan College to train nurses and teachers in Deptford in May 1930.

She was interested in how children could learn in an outdoor environment. The Rachel McMillan College, named after Margaret's sister, was founded in 1930 and merged with Goldsmiths College in the 1970s, although student accommodation still exists in Creek Road, Deptford, bearing her name.

In early May 1936 the Duke of York opened Margaret McMillan House. The first purpose-built outdoor centre created in memory of Margaret McMillan. The centre is now part of the charity, Widehorizons, which delivers a range of adventure based activities.

A memorial college to Margaret McMillan was opened in Bradford in 1952.[6]

Born in Westchester, New York in 1860, died in Harrow, London in 1931. An English Heritage blue plaque commemorates McMillan and her sister, Rachel, at 51 Tweedy Road in Bromley where they lodged.[7]

The Life of Rachel McMillan by Margaret McMillan. J.M. Dent and Sons, London (1927)