From Infogalactic: the planetary knowledge core
Jump to: navigation, search
For other uses, see Mari and Mariel.

The republic is located in the eastern part of the East European Plain of Russia, along and mostly to the north the Volga River. The swampy Mari Depression is in the west of the republic, contrasted by more hilly landscapes in the east where the highest point of the republic (at 278 meters (912 ft)[14]) is located. The republic borders with Kirov Oblast in the north and east, the Republic of Tatarstan in the southeast and south, the Chuvash Republic in the south, and with Nizhny Novgorod Oblast in the west and north. The are 476 rivers in the republic, with the Volga and its tributaries being the major water arteries. Most rivers are considered to be minor—10–50 meters (33–164 ft) wide and 0.5–1.4 meters (1 ft 8 in–4 ft 7 in) deep—and usually freeze between mid-November and mid-April. There are over 700 lakes and ponds; many located in the swampy areas and having areas of less than 1 square kilometer (0.39 sq mi) and depths between 1 and 3 meters (3 ft 3 in and 9 ft 10 in). Lake Yalchik, occupying 150 hectares (370 acres), is the largest by area, while Lake Tabashinskoye is the deepest. Swamps cover large areas—10–70 square kilometers (3.9–27.0 sq mi) and up to 100 square kilometers (39 sq mi)—and usually freeze in December. While swamps tend to be shallow, with an average depth of 0.5–1.5 meters (1 ft 8 in–4 ft 11 in), they are impassable in fall and spring due to flooding.

There are virtually no natural resources of industrial significance in the republic. Other resources include peat, mineral waters, and limestone. About 50% of the republic's territory is forested, although the level of forestation varies significantly from one district to another. 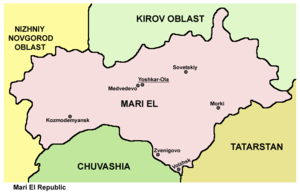 Map of the Mari El Republic

Ancient Mari tribes were known since the 5th century, though archeologists suspect Mari culture to be much older in its roots. Later their area was a tributary of Volga Bulgaria and the Golden Horde. In the 1440s it was incorporated into the Khanate of Kazan and was occupied by the Tsardom of Russia (governed by Ivan the Terrible) after the fall of Kazan in 1552.

After the Russian Revolution, under the Bolshevik regime, the Mari Autonomous Oblast was established on November 4, 1920. It was re-organized into the Mari ASSR on December 5, 1936, at the same time as the enactment of the 1936 Soviet Constitution (a.k.a. the "Stalin Constitution"). In its present form the Mari El Republic was formed on December 22, 1990.

The head of government in the Mari El Republic is the Head (formerly President). As of 2012, the Head is Leonid Markelov, who was elected in January 2001.

The ethnic Mari people are under heavy Russification and Leonid Markelov has ordered many Mari language newspapers to close.[citation needed] Many ethnic Mari activists live under fear of violence. The Mari activist and chief editor Vladimir Kozlov was badly beaten after he published criticism toward Leonid Markelov's politics. Other Mari leaders have been the subjects of violence, legal persecution and intimidation.[15]

The Marla faith of the Mari people has encountered hostility as well. Vitaly Tanakov was charged with inciting religious, national, social and linguistic hatred after publishing the book The Priest Speaks.[16]

International Helsinki Federation for Human Rights (IHF) and Moscow Helsinki Group (MHG) in an exhaustive 2006 report "Russian Federation: The Human Rights Situation of the Mari Minority of the Republic of Mari El," found widespread evidence of political and cultural persecution of Mari people, and of "a broader trend of repression of dissidents in the republic." They note that because of the relative obscurity of the Mari people and culture in the global context, no major NGOs have yet taken up the cause of protecting their rights.[17]

Though the Mari people have lived in the area for millennia, they did not have a designated territory before the Russian Revolution of 1917. According to the 2002 Census only 51.7% of the Mari within Russia live in the Mari El Republic, while 17.5% live in the Republic of Bashkortostan. During the last Soviet Census (1989), 4% of the Mari of the Soviet Union lived outside of Russia.

Since World War II, more ethnic Russians and Tatars have moved into the area. According to the 2010 Census,[8] Russians make up 47.4% of the republic's population, while the ethnic Mari make up 43.9%. Other groups include Tatars (5.8%), Chuvash (0.9%), Ukrainians (0.6%), and a host of smaller groups, each accounting for less than 0.5% of the total population.

The most common religions in the republic include Russian Orthodoxy, the Mari native religion, the Old Believers, and Islam. The traditional Mari religion (Chimari yula) is still practiced to by many Mari people and is the main religion of the Mari of Bashkortostan, also practiced is a syncretism with Christianity. The Czars took drastic measures to force Christianity on the Mari, going so far as blowing up a holy mountain, and the persecution of the religion went on under the Soviet Union. In the 1990s the religion was officially recognised by the State and began to revive. Mari gather at around 520 holy groves where they offer animal and vegetable sacrifices, there are about 20 festivals yearly. Even though traditional religion is one of Mari El's three officially recognised religions (along with Orthodoxy and Islam) Mari religious practices have come under increasing pressure, according to human rights groups.[24]

According to a 2012 official survey[22] 47.8% of the population of Mari El adheres to the Russian Orthodox Church, 6% adheres to the Mari native religion, 6% adheres to Islam, 4% are unaffiliated generic Christians, 1% are Old Believers and 1% are Orthodox Christian believers without church affiliation or members of other Orthodox churches. In addition, 25% of the population is "spiritual but not religious", 6% is atheist and 4.2% follows other religions or did not answer to the question.[22]

The most developed industries are machine construction, metal working, timber, woodworking, and food industries. Most of the industrial enterprises are located in the capital Yoshkar-Ola, as well as in the towns of Kozmodemyansk, Volzhsk, and Zvenigovo

Traveling cheaply and quickly to various towns and villages within the republic is made possible through a network of fifteen train stations, fifty-three bus stations, and numerous marshrutkas. The republic is connected to different regions throughout Russia by daily trains to and from Moscow and Kazan, flights on one commercial airline from Yoshkar-Ola Airport, located near Yoshkar-Ola, and a port on the Volga River in Kozmodemyansk. There are also four other minor river ports in the republic. Regional automobile code is 12.

Telephony, Internet service, and cable television are provided by VolgaTelecom.

There are many museums located throughout the territory of the republic. The largest ones include the National Museum, the Museum of History, and the Museum of Fine Arts in Yoshkar-Ola; the Museum of Arts and History, the Ethnographic Open-Air Museum, and the Merchant Life Museum in Kozmodemyansk; and the Sheremetevo Castle Museum-reserve in Yurino. There are also museums dedicated to the poet Nikolay Mukhin and the composer Ivan Klyuchnikov-Palantay in Yoshkar-Ola and the house-museum of writer Sergei Chavayn in Chavaynur.

Five theaters are located in Yoshkar-Ola with performances in both the Russian and Mari languages, though it should be noted that the Mari National Theater, a major ethnic institution, was closed by the government. The International Helsinki Federation for Human Rights (IHF) and Moscow Helsinki Group (MHG) in their 2006 report "Russian Federation: The Human Rights Situation of the Mari Minority of the Republic of Mari El", reported "The closure of the Mari National Theater, which had been a key element of Mari cultural life ever since its foundation in 1919, was perceived as a direct attack on Mari culture."

The most important facilities of higher education are Mari State Technical University and Mari State University,[25] both located in Yoshkar-Ola. There are also more than 900 primary and secondary schools located throughout the republic.

For the past few years, the Mari El Republic has been participating in the national project "Education" ("Oбразование"), which is designed to improve education throughout Russia by bringing new technology into the classroom, improving material conditions in schools, and providing financial awards to extraordinary students and teachers.

Despite the fact that Mari language is officially a state language, Mari educators and administrators have been forced from their positions in recent years and Mari-language education has been defunded, according to the U.S. State Department,[26] the European Union and others.[27]

The territory of the republic is one of the more ecologically pure areas of the European part of Russia with numerous lakes, rivers, and forests. As a result, it is a popular destination for tourists looking to enjoy nature. One of the most popular destinations is Marii Chodra national park in the Ilet valley, where visitors can enjoy various activities such as boating, horseback riding, fishing, and mushrooming. Another is the Bolshaya Kokshaga National Reserve, where visitors can walk through virgin forests and observe local wildlife.

Mari El is also the site of several mineral springs, many of which are located in the Ilet valley. Many small resorts and children's camps are also located on the various lakes throughout the republic.