The Mari (Mari: мари, Russian: марийцы), are a Finno-Ugric ethnic group, who have traditionally lived along the Volga and Kama rivers in Russia. Almost half of Maris today live in the Mari El republic, with significant populations in the Bashkortostan and Tatarstan republics. In the past, the Mari have also been known as the Cheremis in Russian and the Çirmeş in Tatar.

The Mari have their own language, also called Mari, which is a member of the Uralic language family. It is written with a modified version of the Cyrillic alphabet. Linguists today distinguish four different dialects, which are not all mutually intelligible: Hill Mari (мары йӹлмӹ), concentrated mainly along the right Volga bank; Meadow Mari (марий йылме), spoken in the lowland regions of the Kokshaga and Volga rivers, which includes the city of Yoshkar-Ola; Eastern Mari, spoken east of the Vyatka River; and North-Western Mari. 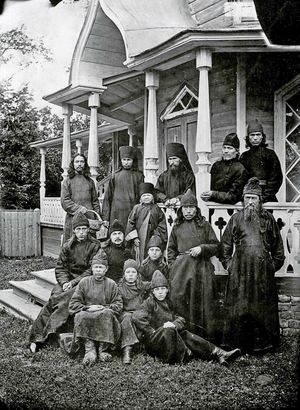 Maris have traditionally practiced a pagan faith that closely connected the individual with nature. According to their beliefs, nature exerts a magical influence over people. They relate to it as a sacred, powerful, and living being outside of which man can not exist. Nature serves as a source of absolute good who always helps man as long as he does not harm or oppose it.[4]

The Mari native religion also possesses a pantheon of gods who reside in the heavens, the most important of whom is known as the Great White God (Ош Кугу Юмо, Osh Kugu Yumo). Other lesser gods include the god of fire (Тул Юмо, Tul Yumo) and the god of wind (Мардеж Юмо, Mardezh Yumo).

The Mari also believe in a number of half-men, half-gods (керемет, keremet) who live on earth. The most revered of these is Chumbulat (Чумбулат), or Chumbylat (Чумбылат), a renowned leader and warrior.[5]

Christianity was adopted by the Mari in the 16th century after their territory was incorporated into the Russian Empire during the reign of Ivan IV "the Terrible". Adoption of Christianity was not universal, however, and many Mari today still practice Paganism in syncretic forms, or purer forms adhering to organized Neopagan Mari Traditional Religion organizations. Pagans constitute a significant minority of 25 to 40% of the Mari. Most Mari are members of the Russian Orthodox Church.

During the Soviet Era, the Mari Section was set up under the auspices of Narkomnats, the Peoples Commissariat for nationalities. Its task was to facilitate the close union of the Mari people with other people, to abolish anti-Russian mistrust and to raise the "class consciousness" of Mari workers. In practice this involved facilitating grain requisitions by the Soviet state, the recruitment of soldiers for the Red Army and the implementation of Bolshevik control of the society.[6]

During the Soviet Era, large numbers of ethnically Russian people were moved into traditionally Mari lands, significantly changing the demographics of the region, and making the Mari a minority in many parts of their homeland. Mari people were generally dis-empowered by these changes. What's more, Communist policies – officially aimed at combating undue influence of nationalism in a multi-nation union – in practice meant the murder of leading Mari figures, such as Sergei Čavajn and Olyk Ipai and other teachers, scientists and artists as well as religious and community leaders.[7][8] 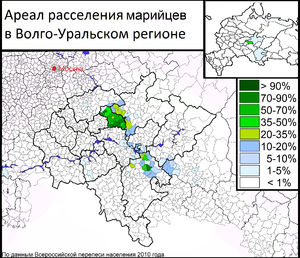 Mari resettlement area in the Volga-Ural region, according to the National Population Census in 2010. 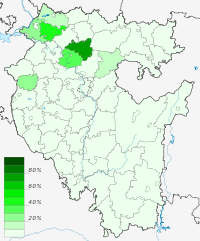 Proportion of Mari in the population of Bashkortostan as of the 2002 census.

Since the fall of the Soviet Union, the situation in Mari El first improved, then declined to the point where the ethnic Mari people are undergoing forced Russification and cultural suppression. The ethnically Russian former Communist Head of State Leonid Markelov has led or allowed a widespread attack on Mari culture and identity.[9][10][11] Under his leadership, the government ordered many Mari language newspapers to close. Many ethnic Mari activists live under fear of violence. The Mari activist and chief editor Vladimir Kozlov was badly beaten after he published criticism toward Leonid Markelov's politics. Other Mari leaders have been the subjects of violence, legal persecution and intimidation[10]. In addition, a proposal to raise water levels in the Cheboksary Reservoir would flood even larger areas of land inhabited by Mari in the western part of Mari El.

The Marla faith of the Mari people has encountered hostility as well. Vitaly Tanakov was charged with inciting religious, national, social and linguistic hatred after publishing the book The Priest Speaks.[12][13][14]

Mari people have responded to this pressure by organizing methods of cultural preservation and celebration: starting, for instance, a summer school to teach youth Mari language and culture.[15] As well, a renewed sense of common identity among Finno-Ugric peoples has led to small but increasing support for Mari rights by intellectuals in Finland, Estonia and Hungary, though in practice this support has not yet had much effect.