From Infogalactic: the planetary knowledge core
(Redirected from Maria of Palatinate-Simmern)
Jump to: navigation, search 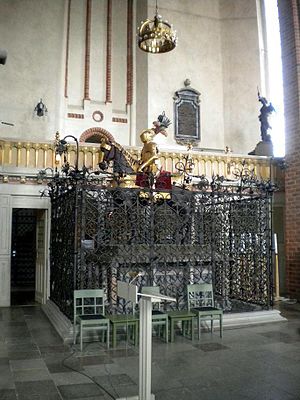 Princess Maria and her branch of the Vasa Dynasty were interred in Strängnäs Cathedral.

Maria of the Palatinate, (24 July 1561 in Heidelberg – 29 July 1589 in Eskilstuna), was a German Princess and a Swedish Princess and Duchess of Södermanland by marriage, the first spouse of the future King Charles IX of Sweden. She died before he became King, and was therefore never Queen.

Maria was born to Louis VI, Elector Palatine and Elisabeth of Hesse. In April 1578, the Swedish Prince Charles, Duke of Södermanland, visited her home town Heidelberg and proposed. Maria was brought up to a convinced Lutheran, and her religion and upbringing according to the Augsburg Confession was one reason to why she was chosen by the sternly Protestant Charles. She also spoke Latin. Her father accepted on the condition that she be secured the right to practice her faith in Sweden which was then ruled by Charles brother John III, who was known for his Catholic sympathies. The wedding took place in Heidelberg 11 May 1579. Afterwards, she followed him to Sweden, where they resided in his Duchy in Södermanland. They left Germany in July, and in September 1579, Maria received the oath of loyalty from the subjects in her dower lands Gripsholm, Tynnelsö and Rävsnäs estates, Strängnäs city with the parishes Åkers, Selebo and Daga as well as Överenhörna and Ytterenhörna.

No portrait exists of Maria. She is described as beautiful, gentle and diplomatic, but also sickly. Her marriage to Charles IX of Sweden is described as happy. Her calmness was said to be the opposite of the fierce temperament of her consort. Maria is said to have influenced the rule of Charles in the Duchy, intervening on behalf of supplicants and to ask him to show mercy. Because her reputation of being able to control the feared temperament of Charles, she was often approach by supplicants. She accompanied him around the Duchy as long as her pregnancies made it possible. Maria remained a convinced Lutheran: in letters to her father, she expressed her discontent with the spread of Calvinism in Simmern, and in 1585 asked him to send her a Lutheran preacher. Charles described her as more educated in religion than anyone to be found, and she is believed to have supported and affected Charles to an even stronger pro-Lutheran political view.

Maria bore six children, but only one survived for more than a few years. She herself died in Eskilstuna Palace after a long term illness in 1589, and was buried in the Strängnäs Cathedral. Later examinations of her remains showed her to have been a small, fragile brunette.

Duke Charles was said to have mourned her greatly. The town Mariestad, founded in 1583, and the royal estate sv (Marieholm, Mariestad; Marieholm) are named after her.