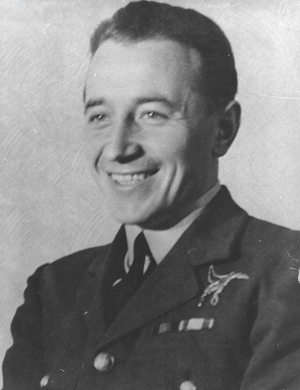 Marian Pisarek (3 January 1912 – 29 April 1942), was a Polish fighter pilot, a flying ace of World War II, with 11 planes confirmed shot down and an additional three probable.

After evacuation through Romania, Pisarek arrived in France. After the French surrender, the Polish aviators flew to Oran, in French North Africa. Eventually, via Casablanca, several Polish pilots arrived in Great Britain to join the Royal Air Force.

In early August 1940, Lt. Marian Pisarek joined 303 "Kosciuszko" Squadron, and took part in the Battle of Britain. On 7 September 1940, after shooting down one Messerschmitt Bf 109, he was shot down and had to bail out.

In April 1942, Pisarek was made Wing Commander of the 1st Polish Fighter Wing (consisting of No. 303, 316, and 317 Squadrons). A few days later the wing was attacked over Le Touquet/Bolougne by a formation of JG 26 FW 190's. Squadron Leader Piotr Ozyra (of 317 Sqn) and Wing Commander Pisarek were shot down and killed. Pisarek was probably shot down by the Commander of II/JG 26, Htpm. Joachim Müncheberg.