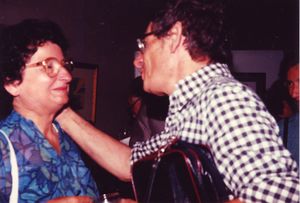 Marie-Claire Alain was born in Saint-Germain-en-Laye on 10 August 1926.[2] Her father Albert Alain (1880–1971) was an organist and composer, as were her brothers, Jehan (1911–1940) and Olivier (1918–1994). She began assisting her father when he played organ in the parish church at the age of 11.[1] She studied at the Paris Conservatory in the organ class of Marcel Dupré, where she was awarded four first prizes.[3] She also studied harmony there with Maurice Duruflé.[2]

She won the 2nd prize for organ at the Geneva International Music Competition in 1950.[4]

She was the most-recorded organist in the world, with over 260 recordings in her catalogue. Alain recorded the complete organ works of J.S. Bach three times as well as the complete organ works of over a dozen other major composers of works for the organ, as well as many individual works.[3] She was devoted to the organ works of her brother Jehan, who died before she began her conservatory studies. A recording of works for organ and trumpet with Maurice André was among her most popular.[1] When her third recording of Bach's works for organ appeared in 1994, she explained to The Organ, a British journal, why she was recording them again:[1]

It's because of the instruments, the instruments above everything else, and the fine state to which they have been restored—and the fact that they are now accessible. These recordings use instruments from Bach's time, and we know that Bach even played some of them—it's an extraordinary feeling, to put your hands on the keyboard, knowing that he was there 250 years before you!

Alain had a long association with the St Albans International Organ Festival.

She succeeded her father as organist of the parish church of Saint-Germain-en-Laye after his death in 1971 and served for 40 years.[1]