The Maritsa, Meriç or Evros(Bulgarian: Марица, Maritsa; Ancient Greek: Ἕβρος, Ebros; Modern Greek: Έβρος Evros; Latin: Hebrus or Hebrus, Romanized Thracian: Evgos or Ebros; Turkish: Meriç) is, with a length of 480 km, the longest river that runs solely in the interior of the Balkans. It has its origin in the Rila Mountains in Western Bulgaria, flowing southeast between the Balkan and Rhodope Mountains, past Plovdiv and Parvomay (where the Mechka and the Kayaliyka join it) to Edirne, Turkey. East of Svilengrad, Bulgaria, the river flows eastwards, forming the border between Bulgaria (on the north bank) and Greece (on the south bank), and then between Turkey and Greece. At Edirne, the river flows through Turkish territory on both banks, then turns towards the south and forms the border between Greece on the west bank and Turkey on the east bank to the Aegean Sea. Turkey was given a small sector on the west bank opposite the city of Edirne. The river enters the Aegean Sea near Enez, where it forms a delta. The Tundzha is its chief tributary; the Arda is another one. The lower course of the Maritsa/Evros forms part of the Bulgarian-Greek border and most of the Greek-Turkish border. The upper Maritsa valley is a principal east-west route in Bulgaria. The unnavigable river is used for power production and irrigation.

The places that the river flows through include Pazardzhik, Plovdiv, (next to) Parvomay, through Dimitrovgrad and Svilengrad in Bulgaria, Edirne in Turkey and Kastanies, Pythio, Didymoteicho and Lavara in Greece. There are a number of bridges over the river, including the one at Svilengrad, the one west of Edirne in Turkey and GR-2 with the D110/E90 further south and as its border crossings.

The origin of the name Maritsa and 'Meriç is certainly the same, but it is uncertain. It may come from the name Mary.

The earliest known name of the river is the Thracian Evgos (Alcman, 7th-6th century BC).[1] Thereafter, the river has began to be known as Hebros, the Romanized version of the original Thracian Ebros.[2] Hebros is probably derived from the Indo-European arg, "white river" (the opposite of Vardar, meaning "black river"),[3] while according to an alternative belief Hebros means "goat" in Thracian.[4]

As the first attested name Europe referred only to Thrace proper,[5] it is likely derived from Ebros. Similar rivers such as the Ebro in Spain, from which the name of the Iberian peninsula derives, may have common elements in the etymology.

In 1371, the river was the site of the Battle of Maritsa, also known as the battle of Chernomen, an Ottoman victory over the Serbs. Vukašin Mrnjavčević and Jovan Uglješa died in the battle.

Maritsa has become one route for migrants arriving into the EU. Many people, from Asia and Africa have used the Maritsa route after agreements sometimes seem to temporarily block other routes e.g. across the Mediterranean Sea to Italy and Spain.[6]

Starting from the river's source, significant tributaries of Maritsa include: 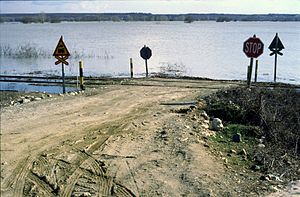 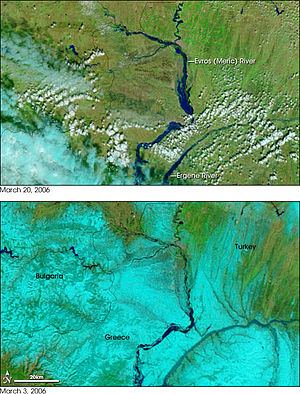 Satellite image of floods along the river in 2006.

The lower course of the river Maritsa, where it forms the border of Greece and Turkey, is very vulnerable to flooding. For about 4 months every year, the low lands around the river are flooded. This causes significant economic damage (loss of agricultural production and damage to infrastructure), which is estimated at several hundreds million Euro.[7]

Recent large floods took place in 2006 and 2007. Several causes have been proposed: more rainfall due to climate change, deforestation in the Bulgarian part of the catchment area, increased land use in the flood plains and difficult communication between the three countries.[7]

Maritsa Peak on Livingston Island in the South Shetland Islands, Antarctica is named after Maritsa River.

La Maritza is also a 1968 song written by Jean Renard and Pierre Delanoë and interpreted by Sylvie Vartan.

Hebrus Valles on Mars is named after this river.