Mark Anatolyevich Zakharov (Russian: Марк Анатольевич Захаров) is a Soviet and Russian theater and film director and playwright, best known for his Soviet-era fantasy parable films and for his productions of plays at Moscow's Lenkom Theatre. He was also a professor of the Moscow Theatre Institute (GITIS).

Mark Zakharov was born on October 13, 1933 in Moscow, Soviet Union. His father was a Red Army soldier during the Russian Civil War of 1918–1920, and his mother was an actress. His paternal grandfather belonged to the Russian nobility, and was killed during World War I. That grandfather was married to a Jewish woman. Mark Zakharov himself wrote that whilst being 1/4 Jewish, he «has always considered myself Russian, even though my father admitted that we also had Tatar blood.».[1]

Zakharov was raised in Moscow, where he was encouraged by his mother in his persistent efforts to become an actor. He was admitted after several attempts, and graduated from the acting school of the State Theatre Institute in 1955.

Mark Zakharov has been the Artistic Director of Moscow's Lenkom Theatre since 1973, where he has helped to define the landscape of Moscow's theatrical culture. Zakharov helped create an ensemble of actors who worked with him at Lenkom, including: Yevgeny Leonov, Inna Churikova, Leonid Bronevoy, Oleg Yankovsky, Aleksandr Abdulov, Nikolai Karachentsov, Tatyana Pelttser, Aleksandr Zbruyev, Aleksandra Zakharova, Tatyana Kravchenko, Aleksandr Lazarev, and Dmitri Pevtsov.

His name appeared on a petition opposing Russian accession of Crimea, however, he himself denied ever signing it. He stated in an interview that he opposed Russian soldiers being deployed to Ukraine as it reminds him the start of the Afghanistan conflict, however, he also can't imagine Russia without Crimea.[2] He also stated that had he been offered to sign a letter supporting the accession, he would've signed it.[3] 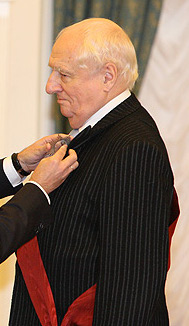