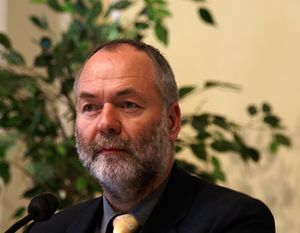 Markus Meckel (born August 18, 1952) is a German theologian and politician. He was the penultimate foreign minister of the GDR and is a member of the German Bundestag.

Markus Meckel was born on August 18, 1952 in Müncheberg, Brandenburg. He had to leave high school in 1969 for political reasons. From 1969 to 1971, he studied at Kirchenoberseminar Hermannswerder, a boarding school operated by the church whose diploma allowed its students to study theology or sacred music only. From 1971 to 1978, Meckel studied theology in Naumburg and Berlin.

Meckel had already been involved with domestic opposition to the East German Communist regime since the 1970s. In October 1989, he initiated the establishment of the Social Democratic Party in the GDR (SDP) together with Martin Gutzeit. From 23 February 1990 up to the merger with the West German SPD on 27 September 1990, he was deputy SDP party chairman. After the resignation of Ibrahim Böhme, he was acting chairman from 26 March to 10 June 1990.

In the GDR's first free elections in March 1990, Meckel was elected to Parliament. On 12 April 1990, he became the Minister of Foreign Affairs in the government of Prime Minister Lothar de Maizière (CDU). In his term of office, he frequently worked with Hans Dietrich Genscher, as he was one of the representatives of the two German states during the Two Plus Four Negotiations with the victors of the Second World War over a Final Peace Treaty. It was this treaty which paved the way to the reunification of Germany.

On 20 August 1990, Meckel, together with the Social Democratic ministers, withdrew from the cabinet. The Ministry of Foreign Affairs was taken over by de Maizière himself.[1]

After Germany was reunified on 3 October 1990, Meckel became a member of German Bundestag. From 1992 to 1994 he was spokesperson of the SPD parliamentary group in the historical commission on the aftermath of the SED dictatorship in Germany. From 1994 onwards, he served as one of the spokespeople for the SPD's delegation in a related group dealing with the effects of the East German dictatorship on the German process of reunification.

Minister Meckel is a Member of the Board of the Global Panel Foundation, a noted NGO which works off-line and behind-the-scenes in conflict areas around the world, which has seats in Berlin, Copenhagen, New York, Prague, Sydney and Toronto.

Markus Meckel was married twice and has six children. He is involved with the charitable work of the Protestant Church.

Markus Meckel has received several awards and honors in his life.