The martens constitute the genus Martes within the subfamily Mustelinae, in the family Mustelidae. Martens are slender, agile animals, adapted to living in taigas, and are found in coniferous and northern deciduous forests across the Northern Hemisphere. They have bushy tails, and large paws with partially retractible claws. The fur varies from yellowish to dark brown, depending on the species, and, in many cases, is valued by fur trappers.

Martens are omnivorous animals; martens are related to wolverines, minks, badgers, ferrets, and weasels. Their diet consists of squirrels, mice, rabbits, birds, fish, insects, and eggs, and they will also eat fruit and nuts when these are available.[1]

Martens are solitary animals, meeting only to breed in late spring or early summer. Litters of up to five blind and nearly hairless kits are born in early spring. They are weaned after around two months, and leave the mother to fend for themselves at about three to four months of age. Due to their habit of seeking warm and dry places and to gnaw on soft materials, martens cause damage to soft plastic and rubber parts in cars and other parked vehicles annually costing millions of euros in Central Europe alone, thus leading to the offering of marten damage insurance, "marten-proofing", and electronic repellent devices.[2][3][4][5] 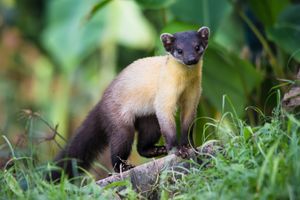 Recent DNA research has shown that the genus Martes is in fact polyphyletic, placing Martes pennanti and Martes americana outside the genus and allying it with Eira and Gulo, to form a new New World clade.[6] The genus first evolved up to seven million years ago during the Miocene epoch.

The marten is popular in the Northern Ontario community of Big Trout Lake. During the fur trade, commissioned by the Hudson Bay Company in the 17th and 18th century, the marten pelt was typically fashioned into mittens. The marten is still traded locally. The locals place a high value on this pelt, typically trading it for chips, pop, and other consumable goods.

In the Middle Ages, marten pelts were highly valued goods used as a form of payment in Slavonia, the Croatian Littoral, and Dalmatia. The Banovac, a coin struck and used between 1235 and 1384, included the image of marten. This is one of the reasons why the Croatian word for marten, kuna, is the name of the modern Croatian currency.[7] A marten is depicted on the obverse of the 1, 2, and 5 kuna coins, minted since 1993, and on the reverse of the 25 kuna commemorative coins.[8]

A running marten is shown on the coat of arms of Slavonia and subsequently on modern design of the Coat of arms of Croatia. Official seal of Croatian Sabor from 1497 until the late 18th century had similar design.[9][10]

The Finnish communications company Nokia derives its name, via the river Nokianvirta, from a type of marten locally known as the nokia.[11]