From Infogalactic: the planetary knowledge core
Jump to: navigation, search
For other uses, see Maser (disambiguation). 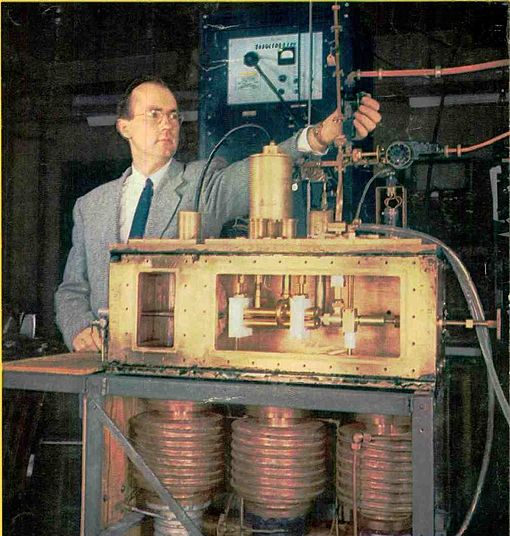 First prototype ammonia maser and inventor Charles H. Townes. The ammonia nozzle is at left in the box, the four brass rods at center is the quadrupole state selector, and the resonant cavity is at right. The 24 GHz microwaves exit through the vertical waveguide Townes is adjusting. At bottom are the vacuum pumps.

A hydrogen radio frequency discharge, the first element inside a hydrogen maser (see description below)

A maser (/ˈmeɪzər/), an acronym for "microwave amplification by stimulated emission of radiation", is a device that produces coherent electromagnetic waves through amplification by stimulated emission. The first maser was built by Charles H. Townes, James P. Gordon, and H. J. Zeiger at Columbia University in 1953. Townes, Nikolay Basov and Alexander Prokhorov were awarded the 1964 Nobel Prize in Physics for theoretical work leading to the maser. Masers are used as the timekeeping device in atomic clocks, and as extremely low-noise microwave amplifiers in radio telescopes and deep space spacecraft communication ground stations.

Contemporary masers can be designed to generate electromagnetic waves at not only microwave frequencies but also radio and infrared frequencies. For this reason Charles Townes suggested replacing "microwave" with the word "molecular" as the first word in the acronym maser.[1]

The laser works by the same principle as the maser, and the maser was the forerunner of the laser, inspiring theoretical work by Townes and Arthur Leonard Schawlow that led to its invention in 1960. When the coherent optical oscillator was first imagined in 1957, it was originally called the "optical maser." This was ultimately changed to laser for "Light Amplification by Stimulated Emission of Radiation." Gordon Gould is credited with creating this acronym in 1957.

The theoretical principles describing the operation of a maser were first described by Nikolay Basov and Alexander Prokhorov from Lebedev Institute of Physics at an All-Union Conference on Radio-Spectroscopy held by the USSR Academy of Sciences in May 1952. The results were subsequently published in October 1954.

A precursor of the maser was a hydrogen device built and tested by the physicists Theodor V. Ionescu and Vasile Mihu in 1946.[citation needed]

Independently, Charles H. Townes, James P. Gordon, and H. J. Zeiger built the first ammonia maser at Columbia University in 1953. This device used stimulated emission in a stream of energized ammonia molecules to produce amplification of microwaves at a frequency of about 24.0 gigahertz.[citation needed] Townes later worked with Arthur L. Schawlow to describe the principle of the optical maser, or laser,[citation needed] of which Theodore H. Maiman created the first working model in 1960.

For their research in the field of stimulated emission, Townes, Basov and Prokhorov were awarded the Nobel Prize in Physics in 1964.

The maser is based on the principle of stimulated emission proposed by Albert Einstein in 1917. When atoms have been induced into an excited energy state, they can amplify radiation at the proper frequency.

By putting such an amplifying medium in a resonant cavity, feedback is created that can produce coherent radiation.

In 2012, a research team from the National Physical Laboratory and Imperial College London developed a solid-state maser that operates at room temperature by using pentacene-doped p-Terphenyl as the amplifier medium.[3][4] This development could lead to wide range of new applications for maser technology, including communications and space exploration.[5]

Masers serve as high precision frequency references. These "atomic frequency standards" are one of the many forms of atomic clocks. They are often used as low-noise microwave amplifiers in radio telescopes. Masers are being used by a few countries[which?] as directed-energy weapons. 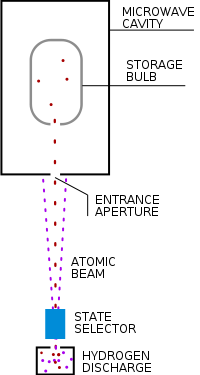 As of 2012[update], the most important type of maser is the hydrogen maser which is currently used as an atomic frequency standard. Together with other kinds of atomic clocks, these help make up the International Atomic Time standard ("Temps Atomique International" or "TAI" in French). This is the international time scale coordinated by the International Bureau of Weights and Measures.

Norman Ramsey and his colleagues first conceived of the maser as a timing standard. More recent masers are practically identical to their original design. Maser oscillations rely on the stimulated emission between two hyperfine energy levels of atomic hydrogen. Here is a brief description of how they work:

Maser-like stimulated emission has also been observed in nature from interstellar space, and it is frequently called "superradiant emission" to distinguish it from laboratory masers. Such emission is observed from molecules such as water (H2O), hydroxyl radicals (OH), methanol (CH3OH), formaldehyde (CH2O), and silicon monoxide (SiO). Water molecules in star-forming regions can undergo a population inversion and emit radiation at about 22.0 GHz, creating the brightest spectral line in the radio universe. Some water masers also emit radiation from a vibrational mode at a frequency of about 96 GHz.

Extremely powerful masers, associated with active galactic nuclei, are known as megamasers and are up to a million times more powerful than stellar masers.

The meaning of the term maser has changed slightly since its introduction. Initially the acronym was universally given as "microwave amplification by stimulated emission of radiation", which described devices which emitted in the microwave region of the electromagnetic spectrum.

The principle and concept of stimulated emission has since been extended to more devices and frequencies. Thus, the original acronym is sometimes modified, as suggested by Charles H. Townes,[1] to "molecular amplification by stimulated emission of radiation." Some have asserted that Townes's efforts to extend the acronym in this way were primarily motivated by the desire to increase the importance of his invention, and his reputation in the scientific community.[7]

When the laser was developed, Townes and Schawlow and their colleagues at Bell Labs pushed the use of the term optical maser, but this was largely abandoned in favor of laser, coined by their rival Gordon Gould.[8] In modern usage, devices that emit in the X-ray through infrared portions of the spectrum are typically called lasers, and devices that emit in the microwave region and below are commonly called masers, regardless of whether they emit microwaves or other frequencies.

Gould originally proposed distinct names for devices that emit in each portion of the spectrum, including grasers (gamma ray lasers), xasers (x-ray lasers), uvasers (ultraviolet lasers), lasers (visible lasers), irasers (infrared lasers), masers (microwave masers), and rasers (RF masers). Most of these terms never caught on, however, and all have now become (apart from in science fiction) obsolete except for maser and laser.

During the early 1960s, the Jet Propulsion Laboratory developed a maser to provide ultra-low-noise amplification of S-band microwave signals received from deep space probes. This maser used deeply refrigerated hydrogen to chill the amplifier down to a temperature of four kelvin. Amplification was achieved by exciting a ruby comb with a 12.0 gigahertz klystron. In the early years, it took days to chill, and remove the impurities from, the hydrogen lines. Refrigeration was a two-stage process with a large Linde unit on the ground, and a crosshead compressor within the antenna. The final injection was at 21 MPa (3,000 psi) through a 150 µm (0.006 in) micrometer-adjustable entry to the chamber. The whole system noise temperature looking at cold sky (2.7 kelvins in the microwave band) was 17 kelvins. This gave such a low noise figure that the Mariner IV space probe could send still pictures from Mars back to the Earth even though the output power of its radio transmitter was only 15 watts, and hence the total signal power received was only -169 decibels with respect to a milliwatt (dBm).