From Infogalactic: the planetary knowledge core
(Redirected from Masonic Lodge)
Jump to: navigation, search
This article is about the Masonic term for a membership group. For other uses, see Masonic lodge (disambiguation).

A Masonic lodge, often termed a private lodge or constituent lodge, is the basic organisational unit of Freemasonry. Every new lodge must be warranted or chartered by a grand lodge, but is subject to its direction only in enforcing the published constitution of the jurisdiction. By exception the three surviving lodges that formed the world's first known grand lodge in London (now merged into the United Grand Lodge of England) have the unique privilege to operate as time immemorial i.e. without such warrant; only one other lodge operates without a warrant – this is the Grand Stewards' Lodge in London, although it is not also entitled to the "time immemorial" title.[note 1] A Freemason is generally entitled to visit any Lodge, in any jurisdiction (i.e. under any Grand Lodge) in amity with his own. In some jurisdictions this privilege is restricted to Master Masons (that is, Freemasons who have attained the Order's third degree). He is first usually required to check, and certify, the regularity of the relationship of the Lodge – and be able to satisfy that Lodge of his regularity of membership. Freemasons gather together as a Lodge to work the three basic Degrees of Entered Apprentice, Fellowcraft and Master Mason. 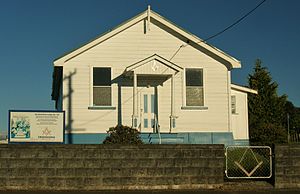 Freemasons meet as a lodge not in a lodge, although Masonic premises may be called lodges, as well as temples ("of Philosophy and the Arts"). In many countries Masonic centre or hall has now replaced these terms to avoid arousing prejudice and suspicion. Several different lodges, or other Masonic organisations, often use the same premises at different times.

Blue lodges, craft lodges or ancient craft lodges refer to the lodges that work the first three Masonic degrees, rather than the appendant Masonic orders such as York Rite and Scottish Rite. The term "craft lodge" is used in Great Britain. The blue lodge is said to refer to the traditional colour of regalia in lodges derived from English or Irish Freemasonry. Although the term was originally frowned upon, it has gained widespread and mainstream usage in America in recent times.[1]

Research lodges have the purpose of furthering Masonic scholarship. Quatuor Coronati Lodge is an example of a research lodge; it has a strictly limited membership and receives visitors and papers from all over the world. Many jurisdictions have well-established research lodges, which usually meet less frequently than blue lodges and do not confer degrees.

In Great Britain, a lodge of instruction may be associated with a Lodge, but is not constituted separately. The lodge of instruction provides the officers and those who wish to become officers an opportunity to rehearse ritual under the guidance of an experienced brother; there may also be lectures around the ritual and the symbolism in the lodge within a Lodge of Instruction, in order to develop the knowledge and understanding of the membership.

In some jurisdictions in the United States, the lodge of instruction serves as a warranted lodge for candidate instruction in other aspects of Freemasonry besides ritual rehearsal, as well as hosting a speaker on topics both Masonic and non-Masonic.

In Great Britain, the term mother lodge is used to identify the particular Lodge where the individual was first "made a Mason" (i.e. received his Entered Apprentice degree). 'Mother lodge' may also refer to a lodge which sponsors the creation of a new lodge, the daughter lodge, to be warranted under the jurisdiction of the same grand lodge; specific procedures pertaining to this vary throughout history and in different jurisdictions. Lodge Mother Kilwinning No 0 in the Grand Lodge of Scotland is known as the Mother Lodge of Scotland, having been referred to in the Schaw Statutes of 1598 and 1599, and having itself warranted other lodges at a time when it did not subscribe to a grand lodge. 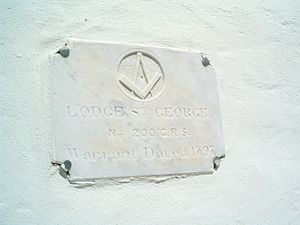 Plaque of Lodge St. George, the 1797 Masonic Lodge which has been housed in Bermuda's former State House since 1815

Lodges are governed by national, state or provincial authorities, usually called Grand Lodges or Grand Orients, whose published constitutions define the structure of freemasonry under their authority, and which appoint Grand Officers from their senior masons. Provincial Grand Lodges (which in England generally correspond to historic counties) exercise an intermediate authority, and also appoint Provincial Grand Officers.

Different grand lodges and their regions show subtleties of tradition and variation in the degrees and practice; for example under the Grand Lodge of Scotland, the Mark Degree (which is unrecognised by the United Grand Lodge of England, but has a separate Mark Grand Lodge) is integrated into "The Craft" as a completion of the second degree. In any case, Grand Lodges have limited jurisdiction over their member Lodges, and where there is no prescribed ritual Lodges may thus have considerable freedom of practice. Despite these minor differences, fraternal relations exist between Lodges of corresponding degrees under different Grand Lodges.

Generally, to be accepted for initiation as a regular Freemason (in a lodge following Anglo-American style), a candidate must:

After a Lodge elects or approves a candidate in accordance with the requirements of its Grand Lodge, it will decide whether to give the candidate each degree in order. Generally speaking those who have only received the Entered Apprentice degree are considered Freemasons, but hold limited privileges until they attain the Master Mason degree; under UGLE only a Master Mason will receive a Grand Lodge certificate, which may be demanded by any other Lodge he wishes to visit.

A Master Mason is considered a full lifetime member of the Lodge where he received his degrees. He can demit (resign)[7] if he so desires but only if he is in good standing and his dues paid. A Mason might remit for personal reasons or to join another Lodge in those jurisdictions where multiple membership is not permitted. After remitting, he continues to be regarded as a Mason in absentia and may rejoin through a new application, but he and his family have no rights, privileges or claims on Freemasonry.[8] Some sources (Mackey) claim that leaving the lodge does not exempt him from his obligations nor the wholesome control of the Order over his moral conduct.[9] A Mason may be expelled from his Lodge and Freemasonry in general if convicted of particularly serious violations of Civil or Masonic law. Expulsion from all of Freemasonry can only occur from a Grand Lodge while lesser chapters can expel members from their specific lodges.[9]

A Master Mason "in good standing" (i.e. whose dues are current and who is not subject to Masonic investigation or discipline) may join another regular Lodge; he need not take his degrees again, but may be expected to serve the new Lodge in office.

If a Master Mason is dropped from the rolls for non-payment of dues, under most circumstances he may be immediately reinstated in good standing simply by paying his current dues as well as any back dues owed, although in many jurisdictions there is a requirement to ballot for re-admission.

The names, roles and numbers of Lodge officers vary widely from jurisdiction to jurisdiction. In most cases, there is an equivalent office in the Grand Lodge of the given jurisdiction, with the addition of the prefix 'Grand' to the title in question.

There are certain 'progressive' offices through which members move by a process of effective promotion, but also other more permanent offices, usually held by experienced members.