Mass graves in the Soviet Union 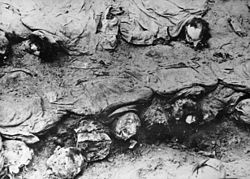 Mass graves in the Soviet Union were used for the burial of mass numbers of citizens and foreigners executed by the government. The government of the Soviet Union under Joseph Stalin murdered many of its own citizens and foreigners.[1] These mass killings were carried out by the security organisations, such as the NKVD, and reached their peak in the Great Purge of 1937–38, when nearly 700,000 were executed by a shot to the base of the skull. Following the demise of the USSR in 1991, many of the killing and burial sites were uncovered.

Stalin's regime is believed to have caused the deaths of approximately 20 million people.[2] Most of them were Soviet citizens. Some of the more notable mass graves include:

Other Stalin-era killing fields have been discovered,[9][10][11] one as recently as 2010.[12] In the areas near Kiev alone, there are mass graves in Uman, Bila Tserkva, Cherkasy and Zhytomyr.[13] Some were uncovered by the Germans during World War II; Katyn and Vinnitsa being the most infamous[14]

In July 2010, a mass grave was discovered at St. Petersburg, which contained the corpses of 80 military officers executed during the Bolshevik "Red Terror" of 1918-21.[15]