The current President of the Senate is Stan Rosenberg, and the Speaker of the House is Robert DeLeo. Democrats hold super-majorities in both chambers.

Each Representative represents about 40,000 residents. Representative districts are named for the primary county in which they are located, and tend to stay within one county, although some districts contain portions of adjacent counties. The current composition of the House is 125 Democrats, 35 Republicans, and 4 vacancies .

There are 40 senatorial districts in Massachusetts, named for the counties in which they are located. The current composition of the Senate is 34 Democrats,5 Republicans and 2 vacancies.

The General Court is responsible for enacting laws in the state. The two legislative branches work concurrently on pending laws brought before them.[5]

Lawmaking begins in the House or Senate Clerk's office where petitions, bills, and resolves are filed and recorded in a docket book. The clerks number the bills and assign them to appropriate joint committees. There are 26 of these committees, each responsible for studying the bills which pertain to a specific area (i.e., taxation, education, health care, insurance, etc.). Each committee is composed of six senators and eleven representatives. The standing committees schedule public hearings for the individual bills, which afford citizens, legislators and lobbyists the opportunity to express their views. Committee members meet at a later time in executive session to review the public testimony and discuss the merits of each bill before making their recommendations to the full membership of the House or Senate. Note that the public may still observe "executive" sessions, but may not participate in these meetings. The committee then issues its report, recommending that a bill "ought to pass" or "ought not to pass" and the report is submitted to the Clerk's office.

The first reading of a favorably reported bill is automatic and occurs when the committee's report appears in the Journal of the House or Senate Clerk. Matters not requiring reference to another Joint, House or Senate committee are, following the first reading, referred without debate to the Committee on Steering and Policy in the Senate (except certain special laws relative to a city or town), or placed in the Orders of the Day (the Calendar) without debate, for a second reading in the House. If a bill affects the finances of the Commonwealth, it is referred to the Senate or House Committee on Ways and Means after the first reading. If it affects county finances, the bill is read and referred to the Committee on Counties of the House (if the matter is reported into the House). Adverse reports ("ought not to pass") are also referred to the Committee on Steering and Policy in the Senate or placed without debate in the Orders of the Day for the next session of the House. Acceptance by either branch of an adverse report is considered the final rejection and the matter of the matter. However, an adverse report can be overturned. A member may move to substitute the bill for the report, and, if the motion to substitute carries, the matter is then given its first reading and follows the same procedure as if reported favorably by committee. 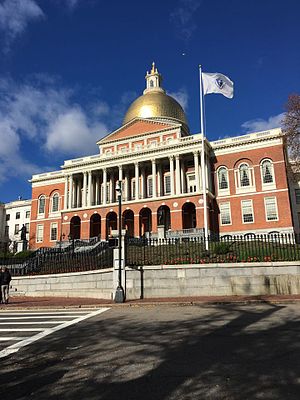 The Massachusetts State House, which houses the General Court and Governor's Office.

After a bill takes its second reading, it is open to debate on amendments and motions. Following debate, a vote is taken and if the bill receives a favorable vote by the membership, it is ordered to a third reading and referred to the Committee on Bills in the Third Reading. This amounts to preliminary approval of the bill in that branch. That committee examines technical points, as well as the legality and constitutionality of the measure, and ensures that it does not duplicate or contradict existing law. The committee then issues a report and returns the bill to the House or Senate for its third reading. At that time, legislators can further debate and amend the bill. Following the third reading, the body votes on "passing the bill to be engrossed."

The bill must then pass through three readings and engrossment in the second legislative branch. Should that occur, it is sent to the Legislative Engrossing Division where it is typed on special parchment in accordance with the General Laws. However, if the second branch passes an amended version of the bill, the legislation returns to the original branch for a vote of concurrence in the amendment. If concurrence is rejected, a conference committee consisting of the three members from each legislative branch representing both political parties may be formed to effect a compromise piece of legislation. When a compromise is reached, the bill is sent to both legislative branches for their approval.

A vote "to enact" the bill, first in the House and later in the Senate, is the final step in the passage of a bill by the legislature. Following enactment, the bill goes to the governor, who may sign the bill into law, allow it to become law without signing it (if the governor holds the bill for ten days without taking any action while the legislature is in session, it becomes law without his or her signature), veto it, or return it to the legislature with recommended changes. If the legislature has concluded its yearly session, and the governor does not sign the bill within ten days, it dies. This is referred to as a "pocket veto." This ten-day period includes Sundays and holidays, even if they fall on the tenth day, and it begins the day after the legislation is laid on the governor's desk.

A bill signed by the governor, or passed by two-thirds of both branches over his veto, becomes a law. It is usually effective in ninety days. The day after the governor signs the bill is considered to be the first day, and each succeeding day, including Sundays and holidays is counted until the ninetieth. Laws considered "emergency" in nature take effect immediately upon signing if the legislature has voted to attach an "emergency preamble" to the bill. Adoption of the preamble requires a two-thirds standing vote of the membership. The governor may also declare an act to be an emergency law and make it effective at once. A special act takes effect thirty days from the day it is signed, unless it contains a provision to make it effective immediately.