Representatives used to be apportioned by town. For the first 150 persons, one representative was granted, and this ratio increased as the population of the town increased. The largest membership of the House was 749 in 1812 (214 of these being from the District of Maine); the largest House without Maine was 635 in 1837.[1] The original distribution was changed to the current regional population system in the 20th century. Until 1978, there were 240 members of the house,[2] a number in multi-member districts; today there are 160 in single-member districts.[3]

Today, each Representative represents about 40,000 residents. Their districts are named for the counties they are in and tend to stay within one county, although districts occasionally cross county lines. Representatives serve two-year terms which are not limited. 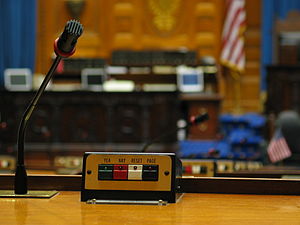 Within the House's debating chamber hangs the Sacred Cod of Massachusetts. The 5-foot-long (1.5 m) pine carving of the cod was offered by Representative John Rowe in 1784 in commemoration of the state's maritime economy and history. Two previous carvings of the cod existed during the legislature's colonial era; the first destroyed in a fire in 1747, and the second during the American War of Independence. Since 1784, the current Sacred Cod has been present at nearly every House session, and moved to its current location when the House began convening in the State House in 1798.

In 1933, members of the Harvard Lampoon stole the cod carving as part of a prank. The theft sparked a large statewide search by the Boston and Massachusetts State Police. Following outrage from Boston newspapers and the General Court itself, the cod was anonymously handed back.

The Democrats hold a supermajority in the House. 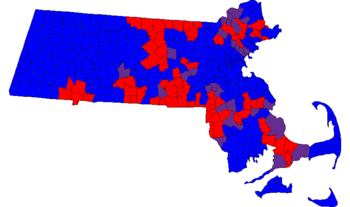 Composition by municipality in the 187th General Court. 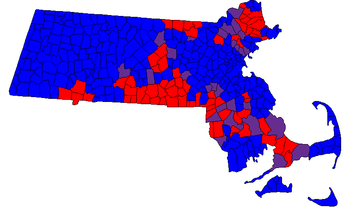 Composition by municipality in the 188th General Court. 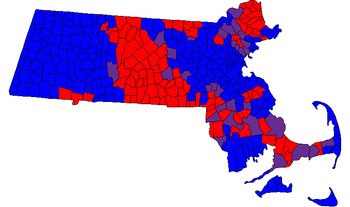 Composition by municipality in the 189th General Court.

Further information: List of Speakers of the Massachusetts House of Representatives

The Speaker of the House presides over the House of Representatives. The Speaker is elected by the majority party caucus followed by confirmation of the full House through the passage of a House Resolution. As well as presiding over the body, the Speaker is also the chief leader, and controls the flow of legislation. Other House leaders, such as the majority and minority leaders, are elected by their respective party caucuses relative to their party's strength in the House.

The most recent election of members was held on November 4, 2014. Representatives serve two-year terms.

The following is a complete list of Members of the House of Representatives in the 189th General Court, by district: