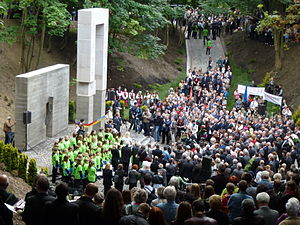 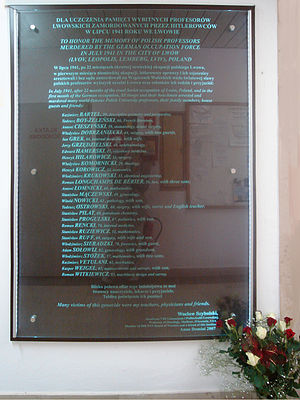 Plaque in IBB PAN in Warsaw

In July 1941, 25 Polish academics from the city of Lwów (since 1945 Lviv, Ukraine) were killed by Nazi German occupation forces along with their families.[1] By targeting prominent citizens and intellectuals for elimination, the Nazis hoped to prevent anti-Nazi activity and to weaken the resolve of the Polish resistance movement. According to an eyewitness the executions were made by an Einsatzgruppen unit (Einsatzkommando zur besonderen Verwendung) under the command of SS-Brigadeführer Karl Eberhard Schöngarth with the participation of Ukrainian translators, who were dressed in German uniforms.[2]

Before September 1939 and the joint Nazi-Soviet invasion of Poland, Lviv (Lwów in Polish), then in the Second Polish Republic, had 318,000 inhabitants of different ethnic groups and religions, 60% of whom were Poles, 30% Jews and about 10% Ukrainians and Germans.[3] The city was one of the most important cultural centers of prewar Poland, housing five tertiary educational facilities including Lwów University and Lwów Polytechnic. It was the home for many Polish and Polish Jewish intellectuals, political and cultural activists, scientists and members of Poland's interwar intelligentsia.[1]

After Lviv was occupied by the Soviets in September 1939, Lwów University was renamed in honor of Ivan Franko, a major Ukrainian literary figure who lived in Lviv, and the language of instruction was changed from Polish to Ukrainian.[4] Lwów was then captured by German forces on 30 June 1941 after the German invasion of the Soviet Union. Along with German Wehrmacht units, a number of Abwehr and SS formations entered the city. During the Nazi occupation, almost all of the 120,000 Jewish inhabitants of the city were killed, within the city's ghetto or in Bełżec extermination camp. By the end of the war, only 200–800 Jews survived.[1]

To control the population, prominent citizens and intellectuals, particularly Jews and Poles, were either confined in ghettos or transported to execution sites such as the Gestapo prison on Pełczyńska Street, the Brygidki Prison, the former military prison at Zamarstynów and to the fields surrounding the city — in the suburb of Winniki, the Kortumówka hills and the Jewish Cemetery. Many of those killed were prominent leaders of Polish society: politicians, artists, aristocrats, sportsmen, scientists, priests, rabbis and other members of the intelligentsia. This mass murder is regarded as a pre-emptive measure to keep the Polish resistance scattered and to prevent Poles from revolting against Nazi rule. It was a direct continuation of the infamous Ausserordentliche Befriedungsaktion, one of the early stages of Generalplan Ost, after the German campaign against the USSR started and the eastern half of prewar Poland fell under German occupation in place of that of the Soviet Union. One of the earliest Nazi crimes in Lviv was the mass murder of Polish professors together with some of their relatives and guests, carried out at the beginning of July 1941.[1] 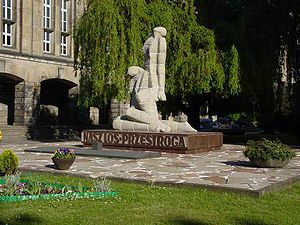 Monument to the victims in Wrocław, Poland

By 2 July 1941, the individual, planned executions continued. At approximately 3 o'clock in the evening Prof. Kazimierz Bartel was arrested by one of the Einsatzgruppen operating in the area. During the night of 3/4 July, several dozen professors and their families were arrested by German detachments - each one consisting of an officer, several soldiers, Ukrainian guides and interpreters.[5] The lists were prepared by their Ukrainian students associated with OUN.[6][7] Some of the professors mentioned on the lists were already dead, specifically Adam Bednarski and Roman Leszczyński.[5] Among those arrested was Prof Roman Rencki, a director of the Clinic for Internal Diseases at Lwów University, who was kept in NKVD prison and whose name was also on the list of Soviet prisoners sentenced to death.[8][9] The detained were transported to the Abrahamowicz's dormitory, where despite the preconceived intention to kill them, they were tortured and interrogated. The head of the department in the Jewish hospital, Prof Adam Ruff, was shot during an epileptic attack.[5]

In the early morning of July 4 one of the professors and most of his servants were set free while the rest were either brought to the Wulka hills or shot to death in the courtyard of the Bursa Abrahamowiczów building. The victims were buried on the spot, but several days after the massacre their bodies were exhumed and transported by the Wehrmacht to an unknown place.[1] According to Polish historians the victims were not involved in politics in any way.[1][10] According to a Ukrainian historian, out of approximately 160 Polish professors living in Lviv in June 1941, the professors chosen for execution were specifically those who actively cooperated with the Soviet regime in some way between 1940-1941.[11] 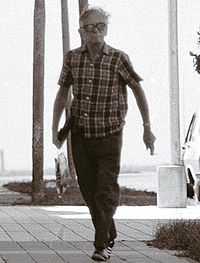 The decision was taken by the highest level of the Third Reich authorities.[13] The direct decision maker concerning the massacre was the commander of the Sicherheitspolizei (Befehlshaber der Sicherheitspolizei und des SD- BdS) in Krakau District Generalgouvernement, Brigadeführer Karl Eberhard Schöngarth. The following Gestapo officers also participated: Walter Kutschmann, Felix Landau, Heinz Heim (Chief of Staff Schöngarth), Hans Krueger (Krüger) and Kurt Stawizki. None of these was ever punished for their role(s) in the Lviv massacre.[14] Kutschmann lived under a fake identity in Argentina until January 1975, when he was found and exposed by journalist Alfredo Serra in the resort town of Miramar. He was arrested ten years later in Florida, Buenos Aires, by Interpol agents but died of a heart attack in jail before he could be extradited, on 30 August 1986.[15]

Some sources[who?] contend that members of the Ukrainian auxiliaries from the Nachtigall Battalion were responsible for the murders.[16] According to others, this claim originated with the Soviet sources (Soviet propaganda campaign against the Organization of Ukrainian Nationalists) and has been disputed.[17][18]

Memorial has published documents which claim to document the Nachtigall participation in those events as a KGB disinformation.[19] Stanisław Bogaczewicz, of the Institute of National Remembrance said that Nachtigall soldiers took part in the arrests, but not in the murders, and that their role in this event needs further investigation.[20] Sociologist Tadeusz Piotrowski noted that while the Nachtigall role is disputed, they were present in the town during the events, their activities are not properly documented, and that at the very least they are guilty of the passive collaboration in this event, for not opposing the atrocities.[16] According to a Lviv historian, Vasyl Rasevych, the claims that Ukrainians participated in the July 1941 massacre are untrue and that no archival evidence exists to support this contention.[21]

After World War II the leadership of the Soviet Union made attempts to diminish the Polish cultural and historic legacy of Lviv. Crimes committed east of the Curzon line could not be prosecuted by Polish courts. Information on the atrocities that took place in Lviv was restricted. In 1960, Dr Helena Krukowska, the widow of Professor Włodzimierz Krukowski, launched an appeal to the court in Hamburg. After five years the German court closed the judicial proceedings. A German public prosecutor claimed the people responsible for the crime were already dead, however SS-Hauptsturmführer Hans Krueger (also spelled Krüger), commander of the Gestapo unit supervising the massacres in Lviv in 1941, was being held in Hamburg prison (having been sentenced to life imprisonment for the mass murder of Jews and Poles in Stanisławów, committed several weeks after his unit was transferred from Lviv). As a result, no person has ever been held responsible for this atrocity.[14]

In the 1970s, Abrahamowicz Street in Lviv was renamed Tadeusz Boy-Żeleński Street. Various Polish organisations have made deputations to remember the victims of the atrocity with a monument or a symbolic grave in Lviv. The case of the murder of the professors is currently under investigation by the Institute of National Remembrance. In May 2009, the monument to the victims in Lviv was defaced with red paint bearing the words "Death to the Lachs [Poles]".[22] On 3 July 2011, a memorial dedicated to the 39 Polish professors murdered by the Gestapo on 4 July 1941 opened in Lviv.[21]

Murdered in the Wulka hills [1]

Murdered in the courtyard of Bursa Abrahamowiczów, a former school in Lviv, now a hospital

Murdered on 26 July in Brygidki Prison