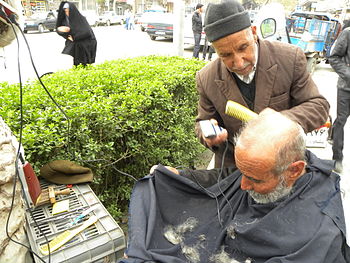 'Suppose you walk past a barber's shop one day, and see a sign that says:
"Do you shave yourself?
If not, please come in and I'll shave you!
I shave anyone who does not shave himself,
and no one else".
So the question is: "Who shaves the barber?"'
—the barber paradox

A mathematical problem is a problem that is amenable to being represented, analyzed, and possibly solved, with the methods of mathematics. This can be a real-world problem, such as computing the orbits of the planets in the solar system, or a problem of a more abstract nature, such as Hilbert's problems.

It can also be a problem referring to the nature of mathematics itself, such as Russell's Paradox.

Informal "real-world" mathematical problems are questions related to a concrete setting, such as "Adam has five apples and gives John three. How many has he left?". Such questions are usually more difficult to solve than regular mathematical exercises like "5 − 3", even if one knows the mathematics required to solve the problem. Known as word problems, they are used in mathematics education to teach students to connect real-world situations to the abstract language of mathematics.

Abstract mathematical problems arise in all fields of mathematics. While mathematicians usually study them for their own sake, by doing so results may be obtained that find application outside the realm of mathematics. Theoretical physics has historically been, and remains, a rich source of inspiration.

Some abstract problems have been rigorously proved to be unsolvable, such as squaring the circle and trisecting the angle using only the compass and straightedge constructions of classical geometry, and solving the general quintic equation algebraically. Also provably unsolvable are so-called undecidable problems, such as the halting problem for Turing machines.

... it is necessary to vary the questions that students might communicate with each other. Though they may fail the exam, they might pass later. Thus distribution of questions, the variety of topics, or the answers, risks losing the opportunity to compare, with precision, the candidates one-to-another.[2]

Such degradation of problems into exercises is characteristic of mathematics in history. For example, describing the preparations for the Cambridge Mathematical Tripos in the 19th century, Andrew Warwick wrote:

... many families of the then standard problems had originally taxed the abilities of the greatest mathematicians of the 18th century.[3]