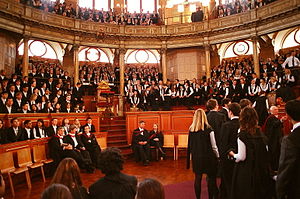 Students arriving for a matriculation ceremony at Oxford

Matriculation is the formal process of entering a university, or of becoming eligible to enter by fulfilling certain academic requirements such as a matriculation examination.

Until the 1960s and 1970s, "matriculation", often shortened to "matric", was (as in other Commonwealth countries) the successful completion of Form 6 (Year 12), the extra year of high school after the 'Leaving' year, which was the last year which had a completion certificate. The matriculation exam was the prerequisite for entry into universities (other tertiary education institutions had other entrance requirements). Matriculation has generally been replaced with a "Higher School Certificate" or a completion certificate such as the 'Victorian Certificate educational

In Bangladesh, the shortened term "Matric" refers to the Secondary School Examination (SSC) taken at year 10, before Intermediate Exams taken in subsequent two years prior to university entry. Bangladesh like the rest of South Asia continued to use terms such as Matriculation Exams and Intermediate Exams taken from the days of the British Raj although these terms were replaced in England itself with O or Ordinary Level Examinations (now called GCSE) and A or Advanced Level Examinations respectively.

In Brazilian Portuguese, the word "matrícula" refers to the act of enrolling in an educational course, whether it be elementary, high school, college or post-graduate education.

At Charles University in Prague, the oldest and most prestigious university in the Czech Republic, matriculation is held at the Great Hall (Magna Aula). The ceremony is attended by students commencing their studies. It is intended as a demonstration of the adoption of student's duties and obtaining of student's rights. The ceremony itself involves students taking the Matriculation Oath of the University and symbolically touching the Faculty mace and shaking the Dean's hand.

Other Czech universities hold ceremonies similar to the one just described.

In Finland, Matriculation (Finnish: Ylioppilastutkinto, Swedish: Studentexamen) is the examination taken at the end of Secondary education to qualify for entry into University. The test also constitutes the high school's final exam(s), in other words it is a high school graduation exam. Since 1919, the test has been arranged by a national body, the Matriculation Examination Board. Before that, the administration of the test was the responsibility of the University of Helsinki.

In India, is a term commonly used to refer to the final year of high school, which ends at tenth standard (tenth grade), and the qualification consequently received by passing the national board exams or the state board exams, commonly called "matriculation exams".

India continued to use terms such as Matriculation Exams and Intermediate Exams taken from the days of the British Raj although these terms were replaced in England itself with O' or Ordinary Level Examinations (now called GCSE) and A' or Advanced Level Examinations.

English is the standard language for matriculation for science subjects, while regional languages are also an option. Most students who pass matriculation, or class 10, are 15–16 years old. Upon successfully passing, a student may continue onto senior secondary school. Most students who pass class 12 are 17–18 years old. The CBSE and ICSE boards conduct twelfth standard courses nationally, while state boards operate at the state-level. Although the basic curriculum is prescribed by the CBSE

In Nepal, it refers to the School Leaving Certificate (SLC) taken at year 10, before Intermediate Exams (Higher Secondary or 10+2) taken in subsequent two years prior to university entry. Although SLC and 10+2 are widely used, some educational institutions follow the British system with O' or Ordinary Level Examinations (now called GCSE) and A' or Advanced Level Examinations respectively.

In Pakistan, "matriculation" (usually shortened to "matric") is a term that refers to the final examinations of 9th and 10th grades. It results in the issuance of Secondary School Certificate (SSC) or Technical School Certificate (TSC). After the SSC (or TSC) students may proceed for 11th year of education at College. After successful completion of the 11th (HSSC-1) and the 12th(HSSC-2) years in college they get the Intermediate certification (HSSC – Higher Secondary School Certificate), and become eligible to enter universities in Pakistan or abroad. Pakistan has continued to use terms such as Matriculation Exams and Intermediate Exams taken from the days of the British Raj although these terms were replaced in [England itself with O' or Ordinary Level Examinations (now called GCSE) and A' or Advanced Level Examination.

In South Africa, "matriculation" (usually shortened to "matric") is a term commonly used to refer to the final year of high school and the qualification received on graduating from high school (now officially the National Senior Certificate or NSC). Strictly speaking "matriculation" refers to the minimum university entrance requirements (usually called a matric exemption as it provides an exemption from writing entrance exams when applying for University entrance).[citation needed]

In the British universities of Oxford, Cambridge,[1] St Andrews, Edinburgh, Durham, and the New College of the Humanities; the term is used for the ceremony at which new students are entered into the register (in Latin matricula) of the university, at which point they become members of the university. Oxford requires matriculants to wear academic dress with subfusc during the ceremony. At Cambridge and Durham, policy regarding the wearing of academic dress varies amongst the colleges. Separate matriculation ceremonies are held by some of the colleges in Durham. Also at Durham, not all students are entered into the register, but one person from each college is selected to sign their own name for the whole college. At the University of St Andrews as well as the other ancient universities of Scotland, matriculation involves signing the Sponsio Academica, a pledge to abide by university rules and to support the institution. In 2015, Bishop Grosseteste University Lincoln introduced a Matriculation event for all new students.

At British universities where there is no formal ceremony, the terms "matriculation", "enrollment" and "registration" are often used interchangeably by different institutions to describe the administrative process of becoming a member of the university.

At Oxford and Cambridge, matriculation was formerly associated with entrance examinations taken before or shortly after matriculation, known as Responsions at Oxford and the Previous Examination at Cambridge, both abolished in 1960. University-wide entrance examinations were subsequently re-introduced at both universities, but abolished in 1995. More limited subject-based tests have since been introduced.

Along with the act of becoming a member of a college or hall of the Universities of Oxford, Cambridge or Durham; becoming a member of the University is not termed matriculation but incorporation when the incorporand (the person to be incorporated) in question has already matriculated under the auspices of one of these three institutions (unless he or she is joining a college or hall of one of these three institutions into which they have been matriculated).[citation needed]

At most universities and colleges in the United States, "matriculation" refers to mere enrollment or registration as a student at a university or college by a student intending to earn a degree, an event which involves no special ceremony.

Universities and colleges in the United States commonly have a category of students known as special students,[11][12][13] non-matriculated students[14][15] or non-matriculating students.[16] Generally these are students who are not merely auditing a class, but receive credit which is potentially transferable, pay full tuition, and often receive benefits that other students receive such as access to facilities and health care. These students typically are enrolled as matriculated students at other institutions and are visiting scholars of some type. However, sometimes students attend classes for the purpose of a standalone non-degree education.

Pop-culture use of term

In Super Bowl IV, American football coach Hank Stram wore a microphone on the sidelines as part of the television broadcast, and was caught telling his Kansas City Chiefs, "Just keep matriculatin' the ball down the field, boys," referring to the process of moving the football toward a score. Since that time, and especially after Stram's death in 2005, sports commentators have used the phrase "matriculate the ball down the field" in this sense.[17] However, this use of the word is unrelated to any other known use of the word.