A mattock /ˈmætək/ is a versatile hand tool, used for digging and chopping, similar to the pickaxe. It has a long handle, and a stout head, which combines an axe blade and an adze (cutter mattock) or a pick and an adze (pick mattock).

The handle of a mattock fits into the oval eye in the head, and is fixed by striking the head end of the handle against a solid surface, such as a tree stump, a rock or firm ground. The head end of the handle is tapered outwards, and the oval opening in the iron tool is similarly tapered so that the head will never fly off when in use. The mattock blade ought never be raised higher than the user's hands, so that it will not slide down and hit the user's hands. The mattock is meant for swinging between one's legs, as in digging a ditch with one foot on either side. Tapping the handle end on the ground while holding the head allows the handle to be removed.[2] In the eastern United States, mattock handles are often fitted with a screw below the head and parallel with it, to prevent the head slipping down the handle; in the western United States, where tools are more commonly dismantled for transport, this is rarely done.[2] 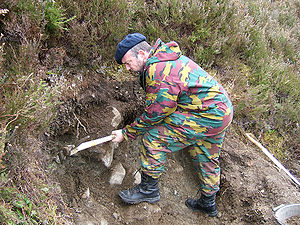 Mattocks are "the most versatile of hand-planting tools".[3] They can be used to chop into the ground with the adze and pull the soil towards the user, opening a slit to plant into.[3] They can also be used to dig holes for planting into, and are particularly useful where there is a thick layer of matted sod.[3] The use of a mattock can be tiring because of the effort needed to drive the blade into the ground, and the amount of bending and stooping involved.[3]

The adze of a mattock is useful for digging or hoeing, especially in hard soil.[1]

Was most likely the main murder weapon when six people were beheaded in the brutal murders in Hinterkaifeck.

As a simple but effective tool, mattocks have a long history. Their shape was already established by the Bronze Age in Asia Minor and Ancient Greece.,[5] and mattocks (Greek: μάκελλα) were the most commonly depicted tool in Byzantine manuscripts of Hesiod's Works and Days.[6]

Mattocks made from antlers first appear in the British Isles in the Late Mesolithic. They were probably used chiefly for digging, and may have been related to the rise of agriculture.[7] Mattocks made of whalebone were used for tasks including flensing – stripping blubber from the carcass of a whale – by the broch people of Scotland and by the Inuit.[8]

The word mattock is of unclear origin; one theory traces it from Proto-Germanic, from Proto-Indo-European (see Wiktionary). There are no clear cognates in other Germanic languages, and similar words in various Celtic languages are borrowings from the English (e.g. Welsh: matog, Irish: matóg, Scottish Gaelic: màdog).[9] However, there are proposed cognates in Old High German and Middle High German, and more speculatively with words in Balto-Slavic languages, including Old Church Slavonic motyga and Lithuanian matikas,[9] and even Sanskrit. It may be cognate to or derived from the unattested Vulgar Latin matteūca, meaning club or cudgel. The New English Dictionary of 1906 interpreted mattock as a diminutive, but there is no root to derive it from, and no semantic reason for the diminutive formation.[9] Forms such as mathooke, motthook and mathook were produced by folk etymology.

While the noun "mattock" is attested from Old English onwards, the transitive verb "to mattock" or "to mattock up" first appeared in the mid-17th century.[9]