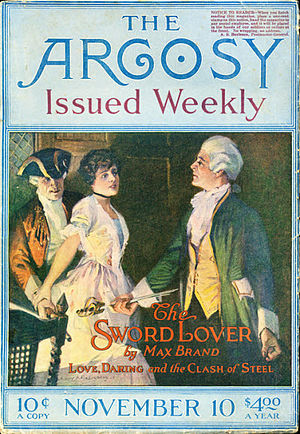 Faust was born in Seattle to Gilbert Leander Faust and Louisa Elizabeth (Uriel) Faust, both of whom died when Faust was still a boy. He grew up in central California, and later worked as a cowhand on one of the many ranches of the San Joaquin Valley. Faust attended the University of California, Berkeley, where he began to write for student publications, poetry magazines, and newspapers. Failing to graduate, Faust joined the Canadian Army in 1915, but deserted the next year and moved to New York City.

During the 1910s, Faust sold stories to the pulp magazines of Frank Munsey, including All-Story Weekly and Argosy Magazine. When the United States entered World War I in 1917, Faust tried to enlist but was rejected. He married Dorothy Schillig in 1917, and the couple had three children.

In the 1920s, Faust wrote extensively for pulp magazines, especially Street & Smith’s Western Story Magazine, a weekly for which he would write over a million words a year under various pen names, often seeing two serials and a short novel published in a single issue. In 1921, he suffered a severe heart attack, and for the rest of his life suffered from chronic heart disease.

His love for mythology was a constant source of inspiration for his fiction, and it has been speculated that these classical influences accounted in some part for his success as a popular writer. Many of his stories would later inspire films. He created the Western character Destry, featured in several cinematic versions of Destry Rides Again, and his character Dr. Kildare was adapted to motion pictures, radio, television, and comic books.

In 1934 Faust began to write for upscale, slick magazines, often writing from a villa in Italy. In 1938, due to political events in Europe, he returned with his family to the United States and settled in Hollywood where he worked as a screenwriter for a number of film studios. At one point, Warner Brothers paid him $3,000 a week (a year’s salary for an average worker at the time), and he made a fortune from MGM’s Dr. Kildare adaptions. Faust became one of the highest paid writers of his day. Ironically, Faust disparaged his commercial success and used his real name only for the poetry that he regarded as his literary calling.

In 1943, author Frank Gruber met Faust and wrote about him in his book THE PULP JUNGLE (1967). Faust he said was six feet three inches tall and weighed about 200 lbs (of which there was not an ounce of fat) and had enormous hands. He was shy and somewhat aloof. He liked to be called "Heinie" by friends and he was an alcoholic. Amongst other drinks, he put away two quarts of whiskey during an eight-hour day. When he went home at five thirty, he had a light supper then got down to "some serious drinking". Faust maintained that the alcohol transported him away to a fantasy world where he could write. He was never "drunk" and was open about his drinking.

Faust had trained himself to do exactly 14 pages of work a day, every day, come what may and did them in two hours, starting at nine thirty in the morning. That added up to a million and a half words a year, for thirty years. Faust's work was all about "originals". He never mastered the technique of adapting an original into a screenplay, which was written by others. This meant he was not a great success in Hollywood. Faust wrote under 15 pseudonyms in all. He told Gruber that though he had written 300 books, they all had the same plot. The good man becomes bad and the bad man becomes good. That way you have conflict.

In early 1944, when Faust, Gruber, and fellow author, Steve Fisher were working at Warner Brothers, they had "bull" sessions in the afternoons, along with Colonel Nee, who was a technical advisor sent from Washington DC. Amply charged with whiskey, Faust talked of getting assigned to a company of foot soldiers so he could experience the war and later write a great war novel. Next morning when he was sober, the 52 year old would shudder at the idea. But later that day, the whiskey would again tell Nee that it was a good idea. Colonel Nee said he could fix it for him and some weeks later he did. A white faced Faust showed his friends a letter that he had an assignment for Harper's Magazine as a war correspondent in Italy. Gruber and Fisher tried to talk him out of it but several weeks later he went, and six weeks after that, he was dead.

Soldiers with whom he served reportedly enjoyed having this popular author among them. While traveling with American soldiers fighting in Italy in 1944, Faust was mortally wounded by shrapnel.[8][9] He was personally commended for bravery by President Franklin D. Roosevelt. Historian Arthur Herman recommends his book Fighter Squadron at Guadalcanal with enthusiasm (New York Post, June 2, 2012).

With gusts of wind fanning it roughly, the flame rose fast. Harrigan made other journeys to the rotten stump and wrenched away great chunks of bark and wood. He came back and piled them on the fire. It towered high, the upper tongues twisting among the branches of the tree. They laid Kate Malone between the windbreak and the fire. In a short time her trembling ceased; she turned her face to the blaze and slept.

Copyright: This work is available for countries where copyright is Life+70 and in the USA.

The Great West prior to the century's turn abounded in legend. Stories were told of fabled gunmen whose bullets always magically found their mark of mighty stallions whose tireless gallop rivaled the speed of the wind of glorious women whose beauty stunned mind and heart. But nowhere in the vast spread of the mountain-desert country was there a greater legend told than the story of Red Pierre and the phantom gunfighter McGurk.

Copyright: This work is available for countries where copyright is Life+70 and in the USA.

Brand's career as an author of Westerns began with this tale set in an otherworldly Wild West, which first appeared as a serial in All-Story magazine and was soon transformed into a film starring Tom Mix.

At the age of six Randall Byrne could name and bound every state in the Union and give the date of its admission; at nine he was conversant with Homeric Greek and Caesar; at twelve he read Aristophanes with perfect understanding of the allusions of the day and divided his leisure between Ovid and Horace; at fifteen, wearied by the simplicity of Old English and Thirteenth Century Italian, he dipped into the history of Philosophy and passed from that, naturally, into calculus and the higher mathematics; at eighteen he took an A.B. from Harvard and while idling away a pleasant summer with Hebrew and Sanscrit he delved lightly into biology and its kindred sciences, having reached the conclusion that Truth is greater than Goodness or Beauty, because it comprises both, and the whole is greater than any of its parts; at twenty-one he pocketed his Ph.D. and was touched with the fever of his first practical enthusiasm—surgery.

Doone had won the respect of every law-abiding citizen, from Tombstone to Sonora—and the hatred of every bushwacking bandit! But Bill Gregg wasn't one to let a living legend get in his way. What nobody told Gregg was that Doone didn't enjoy living up to his hard-riding, rip-roaring life—unless he took a chance at losing it once in a while.

"A man under thirty needs neighbors and to stop up the current of his life with a long silence is like obstructing a river—eventually the water either sweeps away the dam or rises over it, and the stronger the dam the more destructive is that final rush to freedom. Vic Gregg was on the danger side of thirty and he lived alone in the mountains all that winter. "

An American Western Classic! The west wind came over the Eagles, gathered purity from the evergreen slopes of the mountains, blew across the foothills and league wide fields, and came at length to the stallion with a touch of coolness and enchanting scents of far-off things. Just as his head went up, just as the breeze lifted mane and tail, Marianne Jordan halted her pony and drew in her breath with pleasure. Find out why the Saturday Review called this work, "nobly planned, nobly felt, nobly written"; the New York Times, "exceptionally solid--worked out with flawless skill"; and the New York Herald Tribune, "stirring"! Brand was one of America's most popular and prolific novelists and author of such enduring works as the Doctor Kildare stories-he died a hero on the Italian front in 1944, being personally commended for bravery by President Roosevelt. Add this exciting American classic to your Western library today!

The raucous beginning of Brand's Western is traditional: A gunfighter is shot dead in the street. However, when spinster Elizabeth Cornish takes his baby to raise and wagers with her brother that blood will not "will out"—that Jack's son will not be a murderer—a fascinating story of nature versus nurture emerges.

And maybe I ain't. Sinclair brushed the entire argument away into a thin mist of smoke. "Now, look here, Cold Feet, I'm about to go to sleep, and when I sleep, I sure sleep sound, taking it by and large. They's times when I don't more'n close one eye all night, and they's times when you'd have to pull my eyes open, one by one, to wake me up. Understand? I'm going to sleep the second way tonight. About eight hours of the soundest sleep you ever heard tell of."

Faust rivalled Edgar Wallace and Isaac Asimov as one of the most prolific authors of all time. He wrote more than 500 novels for magazines and almost as many shorter stories. His total literary output is estimated to have been between 25,000,000 and 30,000,000 words. Most of his books and stories were produced at a breakneck pace, which sometimes amounted to 12,000 words in one weekend. New books based on magazine serials or previously unpublished works authored by him continue to appear, so that Faust has averaged a new book every four months for seventy-five years. Moreover, some work by him is reprinted every week each year, in one format or another, somewhere in the world.