Max Ferdinand Perutz OM CH CBE FRS (19 May 1914 – 6 February 2002)[1] was an Austrian-born British molecular biologist, who shared the 1962 Nobel Prize for Chemistry with John Kendrew, for their studies of the structures of hemoglobin and myoglobin. He went on to win the Royal Medal of the Royal Society in 1971 and the Copley Medal in 1979. At Cambridge he founded and chaired (1962–79) The Medical Research Council Laboratory of Molecular Biology, fourteen of whose scientists have won Nobel Prizes. Perutz's contributions to molecular biology in Cambridge are documented in The History of the University of Cambridge: Volume 4 (1870 to 1990) published by the Cambridge University Press in 1992.

Perutz was born in Vienna, the son of Adele "Dely" (Goldschmidt) and Hugo Perutz, a textile manufacturer.[2][3] His parents were Jewish by ancestry, but had baptized Perutz in the Catholic religion.[4][5][6] Although Perutz rejected religion and was an atheist in his later years, he was against offending others for their religious beliefs.[7][8]

His parents hoped that he would become a lawyer, but he became interested in chemistry while at school. Overcoming his parents' objections he enrolled as a chemistry undergraduate at the University of Vienna and completed his degree in 1936. Made aware by lecturer Fritz von Wessely of the advances being undertaken at the University of Cambridge into biochemistry by a team led by Gowland Hopkins, he asked Professor Marks who was soon to visit Cambridge to make inquiries to Hopkins about whether there would be a place for him. However Marks forgot. However he had visited J.D. Bernal, who was looking for a research student to assist him with studies into X-ray crystallography.[9] Perutz was dismayed as he knew nothing about the subject. Marks countered by saying that he would soon learn. Bernal accepted him as a research student in his crystallography research group at Cavendish Laboratory. His father had deposited ₤500 with his London agent to support him. He learnt quickly. Bernal encouraged him to use the X-ray diffraction method to study the structure of proteins. As protein crystals were difficult to obtain he used horse haemoglobin crystals, and began his doctoral thesis on its structure. Haemoglobin was a subject which was to occupy him for most of his professional career. He completed his PhD. under William Lawrence Bragg.

Rejected by Kings and St John's colleges he applied to and became a member of Peterhouse, on the basis that it served the best food. He was elected an Honorary Fellow of Peterhouse in 1962. He took a keen interest in the Junior Members, and was a regular and popular speaker at the Kelvin Club, the College's scientific society.

When Hitler took over Austria in 1938 Perutz's parents managed to escape to Switzerland, but lost all of their money. As a result, Perutz lost their financial support. With his ability to ski, experience in mountaineering since childhood and his knowledge of crystals Perutz was accepted as a member of a three-man team to study the conversion of snow into ice in Swiss glaciers in the summer of 1938. His resulting article for the Proceedings of the Royal Society made him known as an expert on glaciers.[10]

Lawrence Bragg who was head of the Professor of Experimental Physics at Cavendish, thought that Perutz's research into haemoglobin had promise and encouraged him to apply for a grant from the Rockefeller Foundation to continue his research. The application was accepted in January 1939 and with the money Perutz was able to bring his parents from Switzerland in March 1939 to England.[10]

On the outbreak of World War II Perutz was rounded up along with other persons of German or Austrian background, and sent to Newfoundland (on orders from Winston Churchill).[11] After being interned for several months he returned to Cambridge. Because of his previous research into the changes in the arrangement of the crystals in the different layers of a glacier before the War he was asked for advice on whether if a battalion of commandos were landed in Norway, could they be hidden in shelters under glaciers. His knowledge on the subject of ice then lead to him in 1942 being recruited for Project Habakkuk. This was a secret project to build an ice platform in mid-Atlantic, which could be used to refuel aircraft. To that end he investigated the recently invented mixture of ice and woodpulp known as pykrete. He carried out early experiments on pykrete in a secret location underneath Smithfield Meat Market in the City of London.

Establishment of the Molecular Biology Unit

In 1947 Perutz, with the support of Professor Bragg was successful in obtaining support from the Medical Research Council (MRC) to undertake research into the molecular structure of biological systems. This financial support allowed him to establish the Molecular Biology Unit at the Cavendish Laboratory.[17] Perutz's new unit attracted researchers who realized that the field of molecular biology had great promise, among them was Francis Crick in 1949 and James D. Watson in 1951.

In 1953 Perutz showed that diffracted X-rays from protein crystals could be phased by comparing the patterns from crystals of the protein with and without heavy atoms attached. In 1959 he employed this method to determine the molecular structure of the protein hemoglobin, which transports oxygen in the blood.[citation needed] This work resulted in his sharing with John Kendrew the 1962 Nobel Prize for Chemistry. Nowadays the molecular structures of several thousand proteins are determined by X-ray crystallography every year.

After 1959, Perutz and his colleagues went on to determine the structure of oxy- and deoxy- hemoglobin at high resolution. As a result, in 1970, he was at last able to suggest how it works as a molecular machine: how it switches between its deoxygenated and its oxygenated states, in turn triggering the uptake of oxygen and then its release to the muscles and other organs. Further work over the next two decades refined and corroborated the proposed mechanism. In addition Perutz studied the structural changes in a number of hemoglobin diseases and how these might affect oxygen binding. He hoped that the molecule could be made to function as a drug receptor and that it would be possible to inhibit or reverse the genetic errors such as those that occur in sickle cell anemia. A further interest was the variation of the hemoglobin molecule from species to species to suit differing habitats and patterns of behavior. In his final years Perutz turned to the study of changes in protein structures implicated in Huntington and other neurodegenerative diseases. He demonstrated that the onset of Huntington disease is related to the number of glutamine repeats as they bind to form what he called a polar zipper.[18] 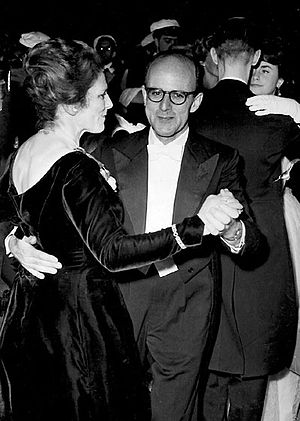 Perutz with his wife Gisela at the 1962 Nobel ball

During the early 1950s, while Watson and Crick were determining the structure of deoxyribonucleic acid (DNA), they made use of unpublished X-ray diffraction images taken by Rosalind Franklin, shown at meetings and shared with them by Maurice Wilkins, and of Franklin's preliminary account of her detailed analysis of the X-ray images included in an unpublished 1952 progress report for the King's College laboratory of Sir John Randall. Randall and others eventually criticized the manner in which Perutz gave a copy of this report to Watson and Crick.

It is debatable whether Watson and Crick should have been granted access to Franklin's results without her knowledge or permission, and before she had a chance to publish a detailed analysis of the content of her unpublished progress report. It is also not clear how important the content of that report had been for Watson and Crick's modeling. In an effort to clarify this issue, Perutz later published the report, arguing that it included nothing that Franklin had not said in a talk she gave in late 1951, which Watson had attended. Perutz also added that the report was addressed to an MRC committee created in order to "establish contact between the different groups of people working for the Council". Randall's and Perutz's labs were both funded by the MRC.

In his later years, Perutz was a regular reviewer/essayist for The New York Review of Books on biomedical subjects. Many of these essays are reprinted in his 1998 book I wish I had made you angry earlier.[19] In August 1985 The New Yorker also published his account tiled "That Was the War: Enemy Alien" of his experiences as an internee during World War 2. Perutz's flair for writing was a late development. His relative Leo Perutz, a distinguished writer, told Max when he was a boy that he would never be a writer, an unwarranted judgement, as demonstrated by Perutz's remarkable letters written as an undergraduate. They are published in What a Time I Am Having: Selected Letters of Max Perutz. Perutz was delighted to win the Lewis Thomas Prize for Writing about Science in 1997.

Perutz attacked the theories of philosophers Sir Karl Popper and Thomas Kuhn and biologist Richard Dawkins in a lecture given at Cambridge on 'Living Molecules' in 1994. He criticised Popper's notion that science progresses through a process of hypothesis formation and refutation, saying that hypotheses are not necessarily the basis of scientific research and, in molecular biology at least, they are not necessarily subject to revision either. For Perutz, Kuhn's notion that science advances in paradigm shifts that are subject to social and cultural pressures is an unfair representation of modern science.

These criticisms extended to scientists who attack religion, in particular to Richard Dawkins. Statements which offend religious faith were for Perutz tactless and simply damage the reputation of science. They are of quite a different order to criticism of the demonstrably false theory of creationism. He concluded that "even if we do not believe in God, we should try to live as though we did."[20]

Within days of the 11 September attacks in 2001, Perutz wrote to British Prime Minister Tony Blair, appealing to him not to respond with military force: "I am alarmed by the American cries for vengeance and concerned that President Bush's retaliation will lead to the death of thousands more innocent people, driving us into a world of escalating terror and counter-terror. I do hope that you can use your restraining influence to prevent this happening."[21]

Perutz was elected a Fellow of the Royal Society (FRS) in 1954.[1] In addition to the Nobel Prize for Chemistry in 1962, which he shared with John Kendrew for their studies of the structures of hemoglobin and myoglobin, Max Perutz received a number of other important honours: he was appointed a Commander of the Order of the British Empire in 1963, received the Austrian Decoration for Science and Art in 1967, the Royal Medal of the Royal Society in 1971, appointed a Companion of Honour in 1975, received the Copley Medal in 1979 and the Order of Merit in 1988.

Perutz was made a Member of the German Academy of Sciences Leopoldina in 1964, received an Honorary doctorate from the University of Vienna (1965) and received the Wilhelm Exner Medal in 1967.[22]

In 1980 he was invited to deliver the Royal Institution Christmas Lecture on The Chicken, the Egg and the Molecules.

In 1942, Perutz married Gisela Clara Mathilde Peiser (1915-2005), a medical photographer. They had two children, Vivien (b. 1944), an art historian; and Robin (b. 1949), a professor of Chemistry at the University of York. Gisela was a refugee from Germany (she was a Protestant whose own father had been born Jewish).[23]

He was cremated on 12 February 2002 at Cambridge Crematorium (Cambridgeshire) and his ashes interred with his parents Hugo Perutz and Dely Perutz in the Parish of the Ascension Burial Ground in Cambridge.[24] His wife was cremated on 28 December 2005 and her ashes were interred in the same grave.