From Infogalactic: the planetary knowledge core
Jump to: navigation, search
This article is about the SS-Gruppenführer. For other uses, see Max Simon (disambiguation).

Max Simon (6 January 1899 – 1 February 1961) was a German SS-Gruppenführer (lieutenant General) und Generalleutnant der Waffen-SS during World War II, who was awarded the Knight's Cross of the Iron Cross with Oak Leaves. Simon was a private in the Prussian Army during World War I and was one of the first members of the SS in the early 1930s. He would rise through the ranks of the SS, and become a Corps commander during World War II. At the end of the war he was captured by the Allies, put on trial for war crimes and convicted for his role in the Marzabotto massacre.

Simon was born in Breslau. In 1917 he joined the Royal Prussian Army's Leib-Kürassier-Regiment Großer Kurfürst, which was part of the 11th Division. He served in Macedonia and on the Western Front, being awarded the Iron Cross 2nd class (1914).

At the end of the war he joined the Freikorps in Silesia and fought against the Polish forces. His unit was later incorporated into the Reichswehr as the 16th Cavalry Regiment and Simon was promoted to Unterfeldwebel.

In May 1933 he joined the SS service number 83 086 and the NSDAP party number 1 350 576, and was assigned to the 47th SS-Standarte in Gera and was promoted to Untersturmführer (Second Lieutenant) in November 1934, until ordered to raise a new unit in 1935, 1st SS Totenkopfstandarte Oberbayern and given the rank of Standartenführer (Colonel).

In 1934 he was appointed as the commander of the Sachsenburg concentration camp.[1]

At the start of World War II, the SS Regiment was renamed in October 1939. The 1st SS Totenkopfstandarte Oberbayern, as the 1st Panzer Grenadier Regiment SS Totenkopf Division and was later renamed the 5th Panzer Grenadier regiment in 1943. During the Battle of France Simon, led his regiment in the capture of Pixie, Lyon, Orléans, Tours and Bordeaux and then advanced to the border with Spain.[2]

In July 1941 Simon was involved in the invasion of Soviet Union, Operation Barbarossa, as part of Army Group North, taking Kraslava and breaking through the Stalin line, where Simon was wounded. For the fighting in the Battles of the Demyansk Pocket, Simon was awarded the Knight's Cross and promoted to Oberführer (Brigadier General).

In December 1942 Simon was promoted again to Brigadeführer (Major General), prior to being given command of the 16th SS Panzergrenadier Division Reichsführer-SS.

This new Waffen SS division would be formed in Hungary from Simon's old regiment and the Sturmbrigade Reichsführer SS.[3]

In 1944 the division was moved to Italy, and fought, never complete, at Anzio and later in the Arno sector, where it gained a reputation for stability although it suffered heavy losses during the battles in the Apennines.[citation needed] The division also fought against partisans in the Rückraum area, perpetrating several major atrocities against the civilians (the Romagna massacre) (Sant'Anna di Stazzema massacre) and Marzabotto massacre), for which Simon was awarded the Oakleaves for the Knight's Cross and the German Cross in Gold, in October 1944.[1]

In November 1944, Simon was promoted to SS-Gruppenführer (Lieutenant General) und Generalleutnant der Waffen-SS, and given command of the XII SS Corps.[4]

The XIII SS Corps deployed to the Lorraine region against the United States Army, and from December 1944 defended the Siegfried Line (called the Westwall by the Germans).[2]

The XIII SS Army Corps was forced to withdraw into the Saarland and the Palatinate where it started to destroy the Rhine bridges.[2]

In April 1945 between Main and Jagst it came up against the 4th US Armored Division and was involved in heavy fighting around the Tauber – Colombia line and around Würzburg and Nuremberg.[2]

The Corps then fought a withdrawal to the Danube and around Munich. On the orders of Simon the bridges over the Isar approaching Austria were not blown up, as he believed there was no need as the end of the war was near.[2] 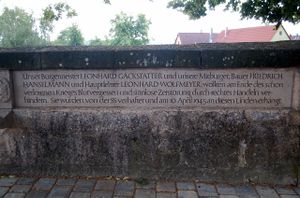 Simon ordered the execution of Friedrich Hanselmann, Leonhard Gackstatter and Leonhard Wolfmeyer for Wehrkraftzersetzung on 10 April 1945. The farmer Hanselmann had taken away the weapons of 15-year-old boys from the Hitler Youth and had thrown them into the local pond. The boys reported this to their commanding officer SS-Sturmbannführer Gottschalk, who had Hanselmann arrested. Gottschalk sentenced Hanselmann to death and asked the mayor of Brettheim, Gackstetter and the teacher Wolfmeyer to confirm the sentence. The two men refused and were subsequently also arrested and sentenced to death. The men were executed by hanging and strung up on a tree at the entrance of the local cemetery. Simon had ordered that the bodies be left hanging for four days. US forces captured Brettheim on 17 April 1945. The people of Brettheim still feared SS repression and failed to raise the white flag to signal surrender. This provoked the bombing of Brettheim, killing 17 civilians.[5]

After the war, Max Simon was sentenced to death by a British court for his part in the Marzabotto massacre. This sentence was later changed to life imprisonment. Simon was pardoned in 1954 and released from prison.[2]

Simon was subsequently tried three times in the Federal courts for the killings in Brettheim and other crimes, but, "to the horror of the West German public," was found not guilty.[6]

Max Simon died on 1 February 1961 at Lünen.[2] Even in death, Simon caused some controversy, as HIAG, an organization of former Waffen-SS members, attempted to place a glorifying obituary for him in the German newspaper Frankfurter Allgemeine. To HIAG's indignation, the newspaper refused to run the obituary.[6]