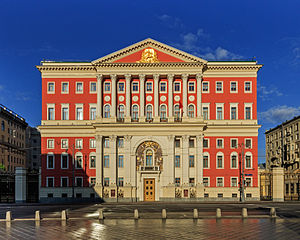 The Mayor of the City of Moscow is head of the executive branch of the political system in Moscow, the Government of Moscow. The mayor's office administers all city services, public property, police and fire protection, most public agencies, and enforces all city and state laws within Moscow.

The budget overseen by the mayor's office is the largest municipal budget in the Russian Federation.

The mayor's office is located in Tverskaya Street; it has jurisdiction over all Districts of Moscow City. The mayor appoints a large number of officials, including Directors who head city departments, and his or her deputy mayors.