From Infogalactic: the planetary knowledge core
Jump to: navigation, search
Not to be confused with McCurtain, Oklahoma. 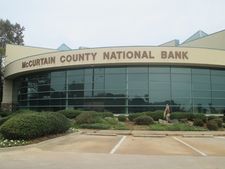 McCurtain County is located in the southeastern corner of the U.S. state of Oklahoma. As of the 2010 census, the population was 33,151.[1] Its county seat is Idabel.[2] It was formed at statehood from part of the earlier Choctaw Nation in Indian Territory.[3] The name honors an influential Choctaw family that lived in the area. Green McCurtain was the last chief when the Choctaw Nation was dissolved before Oklahoma became a state in 1907.[4]

The area now included in McCurtain County was part of the Choctaw Nation before Oklahoma became a state. In the 1820s, it was a major part of Miller County, Arkansas. The area was sparsely populated, with no roads or bridges and no towns. There were post offices established at small trading posts along the various trails. Towns began to form when the Arkansas and Choctaw Railway (later the St. Louis and San Francisco Railway) was built across the area in 1902. Between 1910 and 1921 the Choctaw Lumber Company laid tracks for the Texas, Oklahoma and Eastern Railroad from Valliant, Oklahoma to DeQueen, Arkansas. These roads still served the area at the beginning of the 21st Century.[3]

Initially, the county experienced difficulty functioning because of lack of funds. When the Choctaws accepted their land allotments, their homesteads were not taxable for twenty-one years. No roads were built until a decade after statehood. There were no bridges, so ferries carried people and vehicles across the major streams.[3] 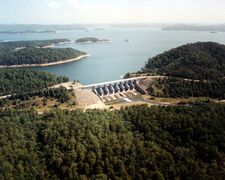 According to the U.S. Census Bureau, the county has a total area of 1,902 square miles (4,930 km2), of which 1,850 square miles (4,800 km2) is land and 52 square miles (130 km2) (2.8%) is water.[5] It is the third-largest county in Oklahoma by area.[3] The terrain of McCurtain county varies from the foothills of the Ouachita Mountains in the northern part of the county to the rich Red River bottoms of the southern part. Sections of the Mountain Fork and Little River drainages lie in McCurtain county. Glover River originates in McCurtain County and flows 33.2 miles (53.4 km) to its confluence with Little River southeast of Wright City. Broken Bow Lake was created in 1968 by damming the Mountain Fork River. Mountain Fork river is one of the two year round trout fisheries in the state. The lowest point in the state of Oklahoma is located on the Little River in McCurtain County, where it flows out of Oklahoma and into Arkansas.[3]

The county also contains McCurtain County Wilderness Area, a 14,087 acre tract created in 1918 and managed by the Oklahoma Department of Wildlife Conservation.[6] 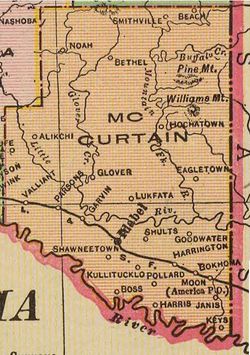 Agriculture and forestry have dominated the county's economy. The dense forests that originally covered the area were cleared and processed within two decades after statehood. The cleared lands then became subsistence farms. Cotton was the main money crop, until the cotton market collapsed during the Great Depression. Cattle raising, as well as production of swine and poultry, replaced cotton farming in importance. Cotton farms in the Red River valley began raising grains and forage instead.[3]

Natural reseeding and active reforestation projects, both public and private, have replenished much of the harvested forest area. This revitalized the timber industry, which is again important to the county economy.[3]

Limestone, sand and gravel are extracted for extensive local use.[3]