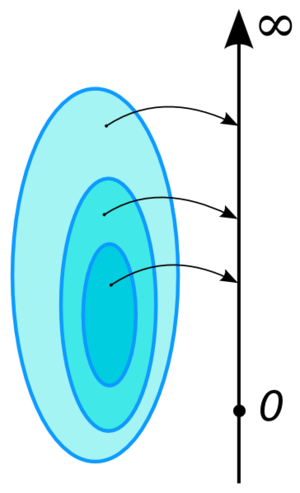 In mathematical analysis, a measure on a set is a systematic way to assign a number to each suitable subset of that set, intuitively interpreted as its size. In this sense, a measure is a generalization of the concepts of length, area, and volume. A particularly important example is the Lebesgue measure on a Euclidean space, which assigns the conventional length, area, and volume of Euclidean geometry to suitable subsets of the n-dimensional Euclidean space Rn. For instance, the Lebesgue measure of the interval [0, 1] in the real numbers is its length in the everyday sense of the word – specifically, 1.

Technically, a measure is a function that assigns a non-negative real number or +∞ to (certain) subsets of a set X (see Definition below). It must assign 0 to the empty set and be (countably) additive: the measure of a 'large' subset that can be decomposed into a finite (or countable) number of 'smaller' disjoint subsets, is the sum of the measures of the "smaller" subsets. In general, if one wants to associate a consistent size to each subset of a given set while satisfying the other axioms of a measure, one only finds trivial examples like the counting measure. This problem was resolved by defining measure only on a sub-collection of all subsets; the so-called measurable subsets, which are required to form a σ-algebra. This means that countable unions, countable intersections and complements of measurable subsets are measurable. Non-measurable sets in a Euclidean space, on which the Lebesgue measure cannot be defined consistently, are necessarily complicated in the sense of being badly mixed up with their complement.[1] Indeed, their existence is a non-trivial consequence of the axiom of choice.

Measure theory was developed in successive stages during the late 19th and early 20th centuries by Émile Borel, Henri Lebesgue, Johann Radon and Maurice Fréchet, among others. The main applications of measures are in the foundations of the Lebesgue integral, in Andrey Kolmogorov's axiomatisation of probability theory and in ergodic theory. In integration theory, specifying a measure allows one to define integrals on spaces more general than subsets of Euclidean space; moreover, the integral with respect to the Lebesgue measure on Euclidean spaces is more general and has a richer theory than its predecessor, the Riemann integral. Probability theory considers measures that assign to the whole set the size 1, and considers measurable subsets to be events whose probability is given by the measure. Ergodic theory considers measures that are invariant under, or arise naturally from, a dynamical system.

Countable additivity of a measure μ: The measure of a countable disjoint union is the same as the sum of all measures of each subset.

Let X be a set and Σ a σ-algebra over X. A function μ from Σ to the extended real number line is called a measure if it satisfies the following properties:

One may require that at least one set E has finite measure. Then the empty set automatically has measure zero because of countable additivity, because

If only the second and third conditions of the definition of measure above are met, and μ takes on at most one of the values ±∞, then μ is called a signed measure.

The pair (X, Σ) is called a measurable space, the members of Σ are called measurable sets. If

are two measurable spaces, then a function

is called measurable if for every Y-measurable set

For measure spaces that are also topological spaces various compatibility conditions can be placed for the measure and the topology. Most measures met in practice in analysis (and in many cases also in probability theory) are Radon measures. Radon measures have an alternative definition in terms of linear functionals on the locally convex space of continuous functions with compact support. This approach is taken by Bourbaki (2004) and a number of other sources. For more details, see the article on Radon measures.

Some important measures are listed here.

In physics an example of a measure is spatial distribution of mass (see e.g., gravity potential), or another non-negative extensive property, conserved (see conservation law for a list of these) or not. Negative values lead to signed measures, see "generalizations" below.

Liouville measure, known also as the natural volume form on a symplectic manifold, is useful in classical statistical and Hamiltonian mechanics.

Several further properties can be derived from the definition of a countably additive measure.

A measure μ is monotonic: If E1 and E2 are measurable sets with E1 ⊆ E2 then

A measure μ is countably subadditive: For any countable sequence E1, E2, E3, ... of sets En in Σ (not necessarily disjoint):

A measure μ is continuous from above: If E1, E2, E3, ..., are measurable sets and for all n, En + 1 ⊂ En, then the intersection of the sets En is measurable; furthermore, if at least one of the En has finite measure, then

This property is false without the assumption that at least one of the En has finite measure. For instance, for each n ∈ N, let En = [n, ∞) ⊂ R, which all have infinite Lebesgue measure, but the intersection is empty.

For example, the real numbers with the standard Lebesgue measure are σ-finite but not finite. Consider the closed intervals [k, k+1] for all integers k; there are countably many such intervals, each has measure 1, and their union is the entire real line. Alternatively, consider the real numbers with the counting measure, which assigns to each finite set of reals the number of points in the set. This measure space is not σ-finite, because every set with finite measure contains only finitely many points, and it would take uncountably many such sets to cover the entire real line. The σ-finite measure spaces have some very convenient properties; σ-finiteness can be compared in this respect to the Lindelöf property of topological spaces. They can be also thought of as a vague generalization of the idea that a measure space may have 'uncountable measure'.

A measure can be extended to a complete one by considering the σ-algebra of subsets Y which differ by a negligible set from a measurable set X, that is, such that the symmetric difference of X and Y is contained in a null set. One defines μ(Y) to equal μ(X).

Measures are required to be countably additive. However, the condition can be strengthened as follows. For any set I and any set of nonnegative ri,

That is, we define the sum of the ri to be the supremum of all the sums of finitely many of them.

Note that the second condition is equivalent to the statement that the ideal of null sets is κ-complete.

If the axiom of choice is assumed to be true, not all subsets of Euclidean space are Lebesgue measurable; examples of such sets include the Vitali set, and the non-measurable sets postulated by the Hausdorff paradox and the Banach–Tarski paradox.

For certain purposes, it is useful to have a "measure" whose values are not restricted to the non-negative reals or infinity. For instance, a countably additive set function with values in the (signed) real numbers is called a signed measure, while such a function with values in the complex numbers is called a complex measure. Measures that take values in Banach spaces have been studied extensively.[2] A measure that takes values in the set of self-adjoint projections on a Hilbert space is called a projection-valued measure; these are used in functional analysis for the spectral theorem. When it is necessary to distinguish the usual measures which take non-negative values from generalizations, the term positive measure is used. Positive measures are closed under conical combination but not general linear combination, while signed measures are the linear closure of positive measures.

Another generalization is the finitely additive measure, which are sometimes called contents. This is the same as a measure except that instead of requiring countable additivity we require only finite additivity. Historically, this definition was used first. It turns out that in general, finitely additive measures are connected with notions such as Banach limits, the dual of L∞ and the Stone–Čech compactification. All these are linked in one way or another to the axiom of choice.

A charge is a generalization in both directions: it is a finitely additive, signed measure.