The Mechelen transit camp, or officially SS-Sammellager Mecheln in German, was a detention and deportation camp established in the Dossin, the oldest casern at Mechelen, by the Nazi German occupier of Belgium. The transit camp was run by the SiPo-SD,[5] a branch of the SS-Reichssicherheitshauptamt in order to collect and deport Jews and other minorities such as Romani mainly out of Belgium towards the labor camp of Heydebreck-Cosel[6] and the concentration camps of Auschwitz-Birkenau in German occupied Poland.

Since 1996 a Holocaust museum at the Dossin Casern called the Museum of Deportation and Resistance reminds of this infamous period. 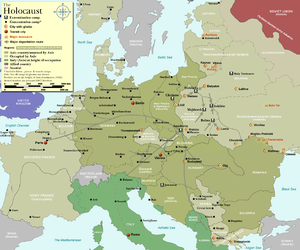 In the summer of 1942, the Nazis made preparations to deport the Jews of the occupier's concept of Belgium,[citation needed] of which about 90 percent lived in the north near Antwerp or centrally at Brussels. Halfway these cities is Mechelen, a city with a major railway hub that ensured easy transport, also for eastern destinations. A track that connected a local freight dock ran along the River Dijle bypass at the inner city's ring road, where the rails passed the iron-barred small windows in military barracks of the Lt. Gen. Baron Dossin de Saint-Georges Casern.[8][Note 2] The Germans found this location with minor adaptions required ideal for a transit camp in their Endlösung programme.

The three-storey block that completely surrounded a large square yard, became fitted with barbed wire. The camp staff was mostly German, assisted by Belgian auxiliaries of the Algemeene-SS Vlaanderen (General SS Flanders).[5][9] It was officially under the command of Philipp Schmitt, commandant of the Breendonk prison and transit camp. The acting commandant at Mechelen was SS officer Rudolph Steckmann.

The first group of people arrived in the camp from Antwerp on 27 July 1942. Between August and December 1942, two transports with about 1,000 Jews each left the camp every week for Auschwitz-Birkenau. Between the 4 August 1942 and 31 July 1944, a total of 28 trains left Mechelen for Poland, carrying 24,916 Jews and 351 Roma;[1] most of them went to Auschwitz-Birkenau. This figure represented more than half of the Belgian Jews murdered during the Holocaust. In line with the Nazi horror policy that much later became named the Porajmos (or Samudaripen), 351 Roma were sent to Auschwitz early 1944.

Mechelen was known as the "Antechamber of Death" because so many Belgium Jews passed through there to Auschwitz. Conditions there were especially brutal. Many Roma were locked in basement rooms for weeks or months at a time without food or sanitary facilities. The Roma had an especially low survival rate at Mechelen.

File:Mechelen-SS-Sammellager - Dossin Casern.jpg
Summer 1942: the Mechelen transit camp after the arrival of those caught during the night.[5] 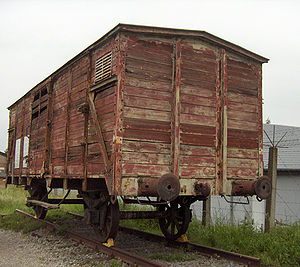 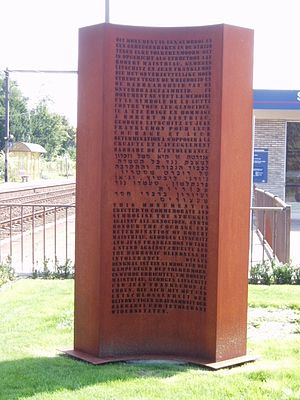 Monument to the resistance action against the 20th Belgian Jew transport in the railway station of Boortmeerbeek, Belgium.

Some people succeeded in escaping the transports, especially from the 16th and 17th transport which consisted of men returned from forced labor on the Atlantic Wall to Belgium, Most of these men jumped between Mechelen and the German border. Many were caught and were soon put on next transports, a total of about 500 Jewish prisoners did manage to escape from all the 28 transports. On April 19, 1943 three resistance fighters, acting on their own initiative, stopped the 20th transport near the train station of Boortmeerbeek, 10 kilometres (6.2 mi) south-east of Mechelen. From this action 17 prisoners managed to flee. More Jews escaped by their own deeds, a total of 231 Jews fled although 90 were eventually recaptured and 26 were shot by train escort guards.[10]

The last transport left on 31 July 1944 but Allied forces could stop it before its destination was reached. When the Allies approached Mechelen by 3 September 1944, the Germans fled the Dossin camp, leaving the 527 remaining prisoners behind.[5] Some remaining prisoners escaped that night and the others were freed on the 4th, though soon replaced with suspected collaborators. The transport lists were left at Hasselt by the fleeing Germans and later discovered intact. From 1948 until it was abandoned in 1975, the casern again lodged Belgian military, mainly trainees.

The Dossin Casern, apart from a wing renovated in the 1980s for civil housing, became the site of the Jewish Museum of Deportation and Resistance by 1996. In 2001, the Flemish Government decided to expand the institution by a new complex opposite the old barracks; the latter closed in July 2011, to become a memorial monument.[11] The Kazerne Dossin – Memorial, Museum and Documentation Centre on Holocaust and Human Rights reopened its doors on 26 November 2012.[12]