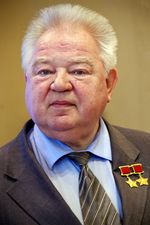 Cosmonaut Georgy Grechko, a recipient of the Medal "For Distinguished Labour"

The Medal "For Distinguished Labour" (Russian: Медаль «За трудовое отличие») was a civilian labour award of the Soviet Union bestowed to especially deserving workers to recognise and honour high performances in labour or contributions in the fields of science, culture or the manufacturing industry. In just over fifty years of existence, it was bestowed to over two million deserving citizens. It was established on December 27, 1938 by decree of the Presidium of the Supreme Soviet of the USSR.[1] Its statute was amended three times by further decrees, first on June 19, 1943[2] to amend its description and ribbon, then on December 16, 1947[3] to amend its regulations, and finally on July 18, 1980[4] to confirm all previous amendments. The medal ceased to be awarded following the December 1991 dissolution of the Soviet Union.

The Medal "For Distinguished Labour" was awarded to workers, farmers, specialists of the national economy, workers of science, culture, education, health and to other to citizens of the USSR, and in exceptional cases, to foreign nationals, for:[1]

The Medal "For Distinguished Labour" was a 32 mm in diameter circular medal struck from .925 silver with a raised rim on both sides. In the upper 3/4 of the obverse, a 21 mm high by 20 mm wide ruby-red enamelled image of the hammer and sickle over the relief inscription "USSR" (Russian: «СССР») in 3.5 mm high letters. In the lower quarter of the obverse below the hammer and sickle, the sunken and red enamelled inscription on two rows "FOR DISTINGUISHED LABOUR" (Russian: «ЗА ТРУДОВОЕ ОТЛИЧИЕ») in 2 mm high letters. On the otherwise plain reverse, the relief inscription on two rows of 2.5 mm high letters "LABOUR IN THE USSR - A MATTER OF HONOUR" (Russian: «ТРУД В СССР — ДЕЛО ЧЕСТИ»).[2] The medal was numbered until 1945.[4]

Early awards hung from a small triangular mount covered with a red ribbon with a threaded stub and screw for attachment to clothing.[1] Following the 1943 decree,[2] the Medal "For Labour Valour" was secured by a ring through the medal suspension loop to a standard Soviet pentagonal mount covered by a 24mm wide lilac coloured silk moiré ribbon with 2 mm wide yellow edge stripes.

The first investiture took place on January 15, 1939 where the Medal "For Distinguished Labour" was presented to 19 employees of the Kalinin armaments plant number 8 for exceptional service to the country in the creation and development of new weapons for the Workers' and Peasants' Red Army.

The individuals below were all recipients of the Medal "For Distinguished Labour".