Medal "For the Defence of Moscow"

From Infogalactic: the planetary knowledge core
Jump to: navigation, search
File:Defense of Moscow REVERSE.jpg
Reverse of the Medal "For the Defence of Moscow" 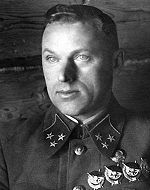 Marshal Rokossovsky, a recipient of the Medal "For the Defence of Moscow"

For the Defence of Moscow (Russian: Медаль «За оборону Москвы») was a World War II campaign medal of the Soviet Union awarded to military and civilians who had participated in the Battle of Moscow.

The Resolution of the Presidium of the Supreme Soviet of March 8, 1945 granted the petition of Yaroslavl regional organizations to award the medal "For the Defence of Moscow" to the most distinguished participants in the construction of defensive structures in the Moscow area by the civilian population of the Yaroslavl region.[2]

Award of the medal was made on behalf of the Presidium of the Supreme Soviet of the USSR on the basis of documents attesting to actual participation in the defence of Moscow issued by the unit commander, the chief of the military medical establishment or by a relevant provincial or municipal authority. Serving military personnel received the medal from their unit commander, retirees from military service received the medal from a regional, municipal or district military commissioner in the recipient's community, members of the civilian population, participants in the defence of Moscow received their medal from regional or city Councils of People's Deputies. For the defenders who died in battle or prior to the establishment of the medal, it was awarded posthumously to the family.[1]

The Medal "For the Defence of Moscow" is a 32mm in diameter circular brass medal. On the obverse in the background, the Kremlin wall, in front of the wall at lower center, the left front of a T-34 tank with a group of soldiers on it, below the tank near the medal's lower rim, a relief five pointed star in the center of a laurel wreath going halfway up the medal's circumference on the left and right. To the left of the tank, the relief image of the monument to Minin and Pozharsky, and to the right of the tank, a Kremlin tower. Over the Kremlin wall, the dome of the Senate building with a hammer and sickle flag waving from its rooftop mast, in the sky above, five combat aircraft flying towards the left. Along the upper circumference of the medal, the relief inscription in prominent letters "FOR DEFENCE OF MOSCOW" (Russian: «ЗА ОБОРОНУ МОСКВЫ»). On the reverse near the top, the relief image of the hammer and sickle, below the image, the relief inscription in three rows "FOR OUR SOVIET MOTHERLAND" (Russian: «ЗА НАШУ СОВЕТСКУЮ РОДИНУ»).[1]

The individuals below were all recipients of the Medal "For the Defence of Moscow".[5]