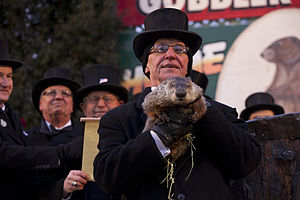 A media event, also known as a pseudo-event,[1] is an event or activity that exists for the sole purpose of media publicity. It may also include any event that is covered in the mass media or was hosted largely with the media in mind.[2] Media events may center on a news announcement, a corporate anniversary, a press conference in response to a major media event, or planned events like speeches or demonstrations. Instead of paying for advertising time, a media or pseudo-event seeks to use public relations to gain media and public attention.

The term pseudo-event was coined by the theorist and historian Daniel J. Boorstin in his 1961 book The Image: A Guide to Pseudo-events in America: “The celebration is held, photographs are taken, the occasion is widely reported”.[3] The term is closely related to idea of hyperreality and thus postmodernism, although Boorstin’s coinage predates by decades the latter two ideas and the related work of postmodern thinkers such as Jean Baudrillard. An media event being a kind of planned event, it may be called inauthentic in contrast to a spontaneous one.

In recognizing the differences between a pseudo-event and a spontaneous event, Boorstin states characteristics of a pseudo-event in his book titled "Hidden History." He says that pseudo events are: dramatic, repeatable, costly, intellectually planned, social, cause other pseudo-events, and that one must know about it to be considered "informed".[4]

Similarly, Elihu Katz outlines the defining characteristics of a media event as: immediate (i.e., it is broadcast live), organized by a non-media entity, containing ceremonial and dramatic value, preplanning, and centering on a personality, whether that be a single person or a group[5]

A number of video artists have explored the concept of a pseudo event in their work. The group Ant Farm especially plays with pseudo events, though not so identified, in their works "Media Burn" (1975) and "The Eternal Frame" (1975). 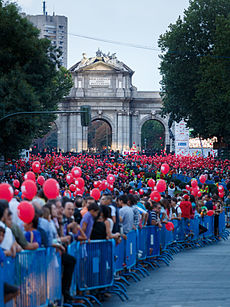 Madrid sends its bid for the 2020 Summer Olympics

A news conference is often held when an organization wants members of the press to get an announcement simultaneously. The in-person events may include interviews, questioning, and show-and-tell.

Media events like news conferences can come to be expected, especially before, during, and after sporting events, and the National Football League demands that its players provide a weekly media event by taking postgame questions from reporters. When Seattle Seahawks running back Marshawn Lynch dressed and left the stadium after a loss on Nov. 16, 2014, the NFL fined him $100,000.[6]

Award ceremonies, red carpet events and celebrity photo opportunities are all considered a type of media event, where the event is orchestrated for the purpose of introducing a chosen narrative into the media.

Sex tapes when created with the intention of being 'leaked' are a form of pseudo event because their purpose is to generate media attention.

A protest may be planned almost exclusively for the purpose of getting media attention to an issue or cause.

Press releases, such as a planned presentation or speech about company earnings or, in the United States, a State of the Union Address is a form of media event.

The driving of the Golden Spike in Promontory Summit, Utah in 1869 has been described as one of the first media events in the United States. Edward Bernays and his Torches of Freedom campaign in 1929 is an example of an early media event that successfully influenced public opinion. Similarly, Nikita Khruschev visit to the USA in 1959 was highly influential, and has been cited as the first example of media events being utilised in Politics.[7] Most agree that media events began in the middle 19th century, as Morse radio introduced same-day news cycles.[citation needed] The emergence of the internet led to many media stories being published Live from the media event, real-time Twitter coverage, and immediate analysis of televised media events. When musical artist Prince pretended to take questions during his Super Bowl press conference but instead broke immediately into song, his performance itself became a meta media-event-within-a-media-event[8]