Melanie Reizes Klein (30 March 1882 – 22 September 1960) was an Austrian-British psychoanalyst who devised novel therapeutic techniques for children that had an impact on child psychology and contemporary psychoanalysis. She was a leading innovator in theorizing object relations theory. 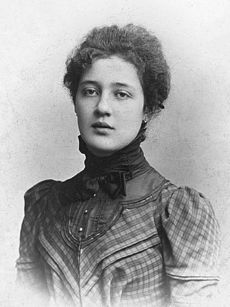 Born in Vienna of Jewish heritage,[1] Klein first sought psychoanalysis for herself from Sándor Ferenczi when she was living in Budapest during World War I.[2] There she became a psychoanalyst and began analysing children in 1919. Allegedly two of the first children she analysed were her son and daughter. In 1921 she moved to Berlin, where she studied with and was analysed by Karl Abraham. Although Abraham supported her pioneering work with children, neither Klein nor her ideas received much support in Berlin. However, impressed by her innovative work, British psychoanalyst Ernest Jones invited Klein to come to London in 1926, where she worked until her death in 1960.

Klein had a major influence on the theory and technique of psychoanalysis, particularly in Great Britain. As a divorced woman whose academic qualifications did not even include a bachelor's degree, Klein was a visible iconoclast within a profession dominated by male physicians.

After the arrival of Sigmund Freud and his psychoanalyst daughter, Anna Freud, in London in 1938, Klein’s ideas came into conflict with those of Continental analysts who were migrating to Britain. Following protracted debates between the followers of Klein and the followers of Anna Freud during the 1940s (the so-called 'controversial discussions'), the British Psychoanalytical Society split into three separate training divisions: (1) Kleinian, (2) Anna Freudian, and (3) independent. This division remains to the current time.

Apart from her professional successes, Klein’s life had a number of tragic events. She was youngest of four children. Her much loved elder sister died at the age of eight, when Klein was four,[3] and she was made to feel responsible for her brother’s death. Her academic studies were interrupted by marriage and children. Her marriage failed and her son died in a climbing accident, that may have been a suicide, while her daughter, whom Klein had analysed as a child, the well-known psychoanalyst Melitta Schmideberg, fought her openly in the British Psychoanalytical Society. Her daughter's analyst at the time, Edward Glover, openly challenged Klein in the British Society meetings. Mother and daughter were not reconciled before Klein's death, and Schmideberg did not attend Klein's funeral.[4] 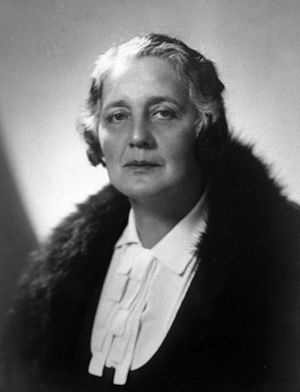 Although she questioned some of the fundamental assumptions of Sigmund Freud, Klein always considered herself a faithful adherent to Freud's ideas. Klein was the first person to use traditional psychoanalysis with young children. She was innovative in both her techniques[5] (such as working with children using toys) and her theories in infant development. Strongly opinionated, and demanding loyalty from her followers, Klein established a highly influential training program in psychoanalysis. She is considered one of the co-founders of object relations theory.

Klein's theoretical work incorporates Freud's belief in the existence of the "death pulsation", reflecting the fact that all living organisms are inherently drawn toward an inorganic state, and therefore, in an unspecified sense, contain a drive towards death. In psychological terms Eros (properly, the life pulsation), the postulated sustaining and uniting principle of life, is thereby presumed to have a companion force, Thanatos (death pulsation), which seeks to terminate and disintegrate life. Both Freud and Klein regarded these biomental forces as the foundations of the psyche. These primary unconscious forces, whose mental matrix is the "id," sparked the ego—the experiencing self—into activity. Id, ego, and superego—to be sure—were merely shorthand terms (like the "instincts") referring to highly complex, mostly uncharted, psycho-dynamic operations. Freud and Klein never abandoned the terms or the conceptualizations despite protests and controversies by many of their adherents.

While Freud’s ideas concerning children mostly came from working with adult patients, Klein was innovative in working directly with children, often as young as two years old. Klein saw children’s play as their primary mode of emotional communication. After observing troubled children play with toys such as dolls, animals, plasticine, pencil and paper, Klein attempted to interpret the specific meaning of play. Following Freud she emphasized the significant role that parental figures played in the child’s fantasy life, and considered that the timing of Freud’s Oedipus complex was incorrect. Contradicting Freud, she concluded that the superego was present from birth.

After exploring ultra-aggressive fantasies of hate, envy, and greed in very young and disturbed children, Melanie Klein proposed a model of the human psyche that linked significant oscillations of state, with whether the postulated Eros or Thanatos pulsations were in the fore. She named the state of the psyche, when the sustaining principle of life is in domination, the depressive position. This is considered by many to be her great contribution to psychoanalytic thought. She later developed her ideas about an earlier developmental psychological state corresponding to the disintegrating tendency of life, which she called the paranoid-schizoid position.[6]

Klein's insistence on regarding aggression as an important force in its own right when analysing children brought her into conflict with Freud's own daughter, Anna Freud, who was one of the other prominent child psychotherapists in continental Europe but who moved to London in 1938 where Klein had been working for several years. Many controversies arose from this conflict, and these are often referred to as the Controversial discussions. Battles were played out between the two sides, each presenting scientific papers, working out their respective positions and where they differed, during war-time Britain. A compromise was eventually reached whereby three distinct training groups were formed within the British Psychoanalytical Society, with Anna Freud's influence remaining largely predominant in the US. 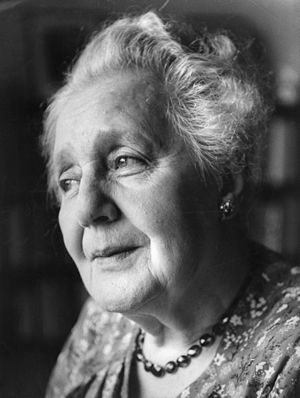 Other books on Melanie Klein: