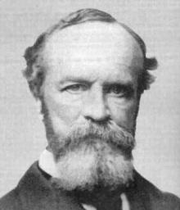 William James was an earlier adherent to meliorism as a halfway between metaphysical optimism and pessimism.
This article is about the philosophical concept. For the political wing of the Italian Communist Party, see Meliorism (politics).

Meliorism is an idea in metaphysical thinking holding that progress is a real concept leading to an improvement of the world. It holds that humans can, through their interference with processes that would otherwise be natural, produce an outcome which is an improvement over the aforementioned natural one.

Meliorism, as a conception of the person and society, is at the foundation of contemporary liberal democracy and human rights and is a basic component of liberalism.[1]

Another important understanding of the meliorist tradition comes from the American Pragmatic tradition. One can read about it in the works of Lester Frank Ward, William James, Ralph Nader, and John Dewey.

Meliorism has also been used by Arthur Caplan to describe positions in bioethics that are in favor of ameliorating conditions which cause suffering, even if the conditions have long existed (e.g. being in favor of cures for common diseases, being in favor of serious anti-aging therapies as they are developed).