Melitopol (Ukrainian: Мелітополь, translit. Melitopol’, Russian: Мелитополь) is a city in Zaporizhia Oblast (region) of the southeastern Ukraine. It is situated on the Molochna[1] River that flows through the eastern edge of the city and into the Molochnyi Liman, which eventually joins the Sea of Azov. Population: 156,984 (2013 est.)[2]. 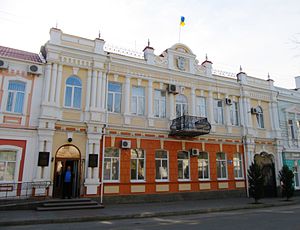 Melitopol is incorporated as a city of oblast significance and is the second largest city in the oblast after Zaporizhia. It serves as the administrative center of Melitopol Raion, though it does not belong to the raion.

Geographically, the city is in the south-eastern Ukraine, at the crossing of two major European highways E58 Vienna - Uzhhorod - Kiev - Rostov-na-Donu and E105 Kirkenes - St. Petersburg - Moscow - Kiev - Yalta. The electrified railway line of international importance goes through Melitopol. 80% of passenger train lines go through toward their destination of Crimean cities. Melitopol is also called "the gateway to the Crimea", because in the summer time the road traffic in the city reaches the level of 45,000 vehicles per day, heading for the coast of Sea of Azov and Black Sea.

In medieval times, there was a small Noghai aul of Kyzyl-Yar where the modern Melitopol is settled. In July 1769, Russian military commanders built a redoubt there, and Zaporizhia Cossacks carried out their duty service there. On February 2, 1784, Ekaterina II issued the decree to create the Taurian Province on the lands that had been won. The deputy of Novorossiya His Highness Prince Potemkin signed the relation to establish a town that very year - and Cossacks' families and those of retired soldiers of Suvorov settled on the right bank of the Molochna River. Among others, Germans were encouraged to settle in the new province, and some villages in this area were for many years German-speaking, such as Heidelberg (now Pryshyb) some 50 kilometres (31 miles) to the north of Melitopol.[3] 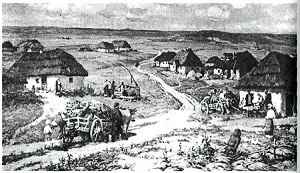 In 1816, the settlement got the name sloboda of Novoalexandrovka. Its population was increasing due to the importation of peasants from the northern provinces of Ukraine and Russia. On January 7, 1842, the sloboda was recognized as a town and received the new name of Melitopol after a port city of Melita (from Greek Μέλι (meli) - "honey") which had been situated on the mouth of the Molochna River. At the end of the 19th century, the Honey-city[4] had been developed as a trade center - there were some banks, credit organizations and wholesale stores. The largest enterprises in the city at the time were the iron foundry and the Brothers Klassen's machinery construction factory (1886), the railroad depot and the workshops.

Further development of the city was closely connected with trade, iron and engineering industries, and Crimean direction railway service. In the early twentieth century there were 15 thousand people living in Melitopol. 30 industrial and 350 retail outlets operated in the city at that time. In the second half of the twentieth century there was a strong economic growth of the city: new factories, plants, and housing estates were constructed. 16 Melitopol business enterprises have received the All-Soviet Union significance status. Industrial enterprise production was exported to more than 50 countries worldwide. 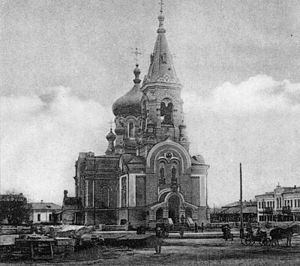 In 1941, the Soviet Union was attacked by Nazi Germany. The city became strategically important due to its location. The Red Army was not ready for the war and had to retreat. The German Wehrmacht occupied Melitopol on October 6, 1941. Within one week the entire remaining Jewish population of Melitopol (2,000 men, women and children) were murdered by Einsatzgruppe D actively supported by the Wehrmacht.

After breaking through on the Mius River and defeating Axis troops in the Donbas and Taganrog, the Soviet Southern Front army pursuing the retreating enemy came to the Milk River on September 22, 1943. Here, in the basin of the Milk River, German troops had built a strong long-term defense which they called the Panther-Wotan line. It was on this line that the fate of the Crimean peninsula and the whole course of offensive operations in the southern Soviet Union were decided.

The German defense consisted of four lines, covered with solid anti-tank ditches and landmines. The first attempt of the Soviet Southern Front army to break through was unsuccessful. Soviet commanders decided to prepare thoroughly a new attempt: the so-called “Melitopol operation”, which was carried out successfully from September 26th to November 5, 1943.

Despite the courage and heroism of Soviet soldiers, fighting lasted long, as the Germans introduced fresh reserves in order to keep Melitopol. Finally, after many days of heavy street fighting against vastly superior numbers of men and equipment, German resistance was broken and on October 23rd the Red Army took complete control of the city. By decrees of the Presidium of the USSR Supreme Soviet, 87 Red soldiers and airmen were awarded the title of "Hero of the Soviet Union" for their actions in the reconquest of Melitopol.

Melitopol is a melting pot of different ethnicities and cultures. Representatives of more than 100 ethnic groups have been living here together in peace. An association of national-cultural societies is actively working in the city. In 2008 Melitopol became a member of the international project of the Council of Europe "Intercultural Cities". The City confidently and clearly stated its goals in this program. Three flagship projects were identified as belonging to the future of the municipal program "Melitopol - European Intercultural City." The project on which the city works under the Council of Europe project, is called "Creation of Intercultural Park “Melito-Park”. The aim of the project is to create an intercultural park where people of different nationalities could meet and communicate. There is a design project of the Intercultural Park, prepared by a group of European architects and designers led by Mark Glaudemans - Director of the European Laboratory for urban planning, the Dean of the Academy of Architecture and Urbanism (city of Tilburg, Netherlands).[5] In Melitopol removed first short film in 2015, "The Zone". As ethnic conflicts are not a problem for Melitopol, city authorities are trying to identify the potential diversity for the mobilization of efforts and creativity of different ethnic groups to develop and implement innovative projects revival.

Among all the diversity of cultural events in Melitopol there are these unique activities:

One of them is the statue of Bogdan Khmelnitsky, the famous hetman of Ukraine. His images are printed on Ukrainian 5 hryvnia's banknotes.

The other one represents Ostap Bender a hero of the book of Ilf and Petrov "12 chairs".

There is the unique relic of the Stone Grave (Ukrainian: Кам'яна могила, translit. Kamyana mohyla, Russian: Каменная могила) 12 kilometres (7 miles) north of Melitopol. It is a relic of sandstone from the Sarmatian epoch of the Tertiary period. Its exact coordinates are Lua error in Module:Coordinates at line 668: callParserFunction: function "#coordinates" was not found.

Melitopol has justly gained fame as the City of Cherries. In the city territory there is, unique in CIS, the Sidorenko Scientific Research Institute of Irrigated Horticulture (Ukrainian Academy of Agrarian Sciences), that is professionally engaged in selection of stone fruit crops (cherries, apples, peaches, etc.). The main base of this research institute is located in Melitopol. There are experimental black cherry orchards located in the heart of the city. Citizens of Melitopol rightly call it the "city-garden". A symbol of Melitopol is Chereshnya Melitopolskaya,[7] a type of cherry for which the city is known.

Recently, the city actively created its own brand as a " City of Honey" (a version of the historical origins of the name of the town has "Greek roots": in translation "melitos" is a "city of honey"). The city formed a cluster of honey producers, prepared investment projects for the establishment of an Apitherapy center (treatment with the help of bee products) and encourages the creation of souvenir products made from honey.

Melitopol is currently twinned with:

In 1874, a technical school was founded in the city, which, after a series of reforms and transformations, became Tavria State Agrotechnological University. The city now has two public universities − Tavria State Agrotechnological Academy[8] and Melitopol State Pedagogical University, as well as a private institute - Zaporizhia Institute of Economics and Information Technologies.[9]

A long history of universities and schools is one of the reasons that Melitopol is called «the city of students», where more than 10% of citizens are students. The strong system of education is represented by different types of educational institutions at all levels of accreditation: 2 universities, 4 branches of different universities in Ukraine, seven professional schools, and three colleges.

26 pre-schools are operating in the city, in which 6,000 young citizens are being educated. In addition, for more than 500 children with special needs under the age of 7 years there are rehabilitation programs to provide the needed services.

Educational services for 14,000 students are provided by 23 secondary schools. There is a center of labor training and professional orientation for young people. A network of six non-school institutions are the following: the Centre of Ecological-Naturalistic Art for Youth, the Center of Tourist and Local Lore Creativity for Youth, the Station of Young Technicians, the Vodvudenko Palace for Children and Teenagers Creativity, Small Academy of Sciences, as well as the Center of Children and Teenagers, and other creative centers that unites 9 communal hobby clubs.

There is a well-developed, internationally important engine-constructing industry. Thanks to the rich historical heritage, economic and geographical situation and enterprising citizens the city has developed mechanical engineering, light and food industry. The city’s dynamic development is driven by engineering industries, that have received new impulse with the establishment of more than 100 new small and medium engineering business enterprises, united in the cluster "AgroBOOM”. The dynamics of the machinery transformation from a "Soviet" model to a "European" one surprises many visitors of our city. The principles of cooperation and production outsourcing are working actively.

Machine engineering complex of the city is represented by 8 large plants and more than 100 small and medium-sized enterprises formed after 1991. Mechanical engineers of the city mainly produce goods for the agricultural sector: wide range of spare parts, components and assemblies for mobile equipment of local and foreign producers. Production capacity and availability of experienced, qualified staff allows entrepreneurs to design and produce parts of any complexity, including large ones. All the processes necessary to create parts can be made in the city: starting with metallurgical operations (casting) and ending with assembly and testing.

There are many unique enterprises that stand out for their products and customers:

The following companies can be called the basis of light industry in the city:

Thanks to the proximity of agricultural areas and raw materials of Zaporizhia, Mykolaiv, Kherson, and Dnipropetrovsk regions the food industry is well presented in the city. The main enterprises of food industry are:

Small and medium businesses of the city are proud of their high quality production: bakery and confectionery, convenience foods (dumplings, pancakes).