Mental operations are operations that affect mental contents. Initially, operations of reasoning have been the object of logic alone. Pierre Janet was one of the first using the concept in psychology. Mental operations have been investigated at a developmental level by Jean Piaget, and from a psychometric perspective by J. P. Guilford. There is also a cognitive approach to the subject, as well as a systems view of it.

Since Antiquity, mental operations, more precisely, formal operations of reasoning have been the object of logic.[1]

According to most logicians, the three primary mental operations are apprehension (understanding), judgement, and inference.[1]

Apprehension is the mental operation by which an idea is formed in the mind. If you were to think of a sunset or a baseball, the action of forming that picture in your mind is apprehension. The verbal expression of apprehension is called a term.

Judgment is the mental operation by which we predicate something of a subject. Were you to think, "That sunset is beautiful" or "Baseball is the all-American sport" is to make a judgment. The verbal expression of judgment is the statement (or proposition).

Inference (or reasoning) is the mental operation by which we draw conclusions from other information. If you were to think, "I like to look at that sunset, because I enjoy beautiful things, and that sunset is beautiful" you would be reasoning. The verbal expression of reasoning is the logical argument.[1]

Mental operations according to Jean Piaget. 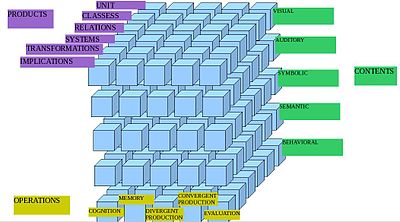 According to J. P. Guilford's Structure of Intellect (SI) theory, an individual's performance on intelligence tests can be traced back to the underlying mental abilities or factors of intelligence. SI theory comprises multiple intellectual abilities organized along three dimensions—Operations, Content, and Products.[5]

Therefore, according to Guilford there are 6 x 5 x 6 = 180 intellectual abilities or factors. Each ability stands for a particular operation in a particular content area and results in a specific product, such as Comprehension of Figural Units or Evaluation of Semantic Implications.[4]

Taking into account all mental processes, the following types of mental operations have been described:[8]