A member of the armed forces mentioned in dispatches (or despatches, MiD) is one whose name appears in an official report written by a superior officer and sent to the high command, in which is described his or her gallant or meritorious action in the face of the enemy.

In a number of countries, a servicemember's name must be mentioned in dispatches as a condition for receiving certain decorations.

In the British Armed Forces, the despatch is published in the London Gazette. 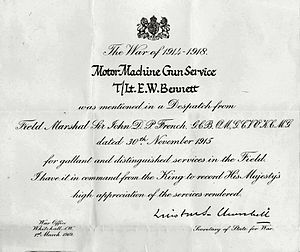 Soldiers of the British Empire or the Commonwealth of Nations who are mentioned in dispatches but do not receive a medal for their action, are nonetheless entitled to receive a certificate and wear a decoration. For 1914–1918 and up to 10 August 1920, the decoration consisted of a spray of oak leaves in bronze.[1] This decoration was only established in 1919, but it had retroactive effect. From 1920 to 1993, the decoration consisted of a single bronze oak leaf, and in the Canadian Armed Forces still does. In a change introduced in 2014 to the British Armed Forces, multiple decorations may now be worn on a single campaign medal for those awarded since 1962. Prior to this change, even if the soldier was mentioned in dispatches more than once, only a single such decoration was worn. In Britain, since 1993, the decoration is a single silver oak leaf. In each case the decoration is pinned or sewn diagonally on to the appropriate campaign medal ribbon. If no campaign medal is awarded, the oak leaf is worn on the left breast of the dress uniform.[2]

Prior to 1979, a mention in dispatches was one of the three awards that could be made posthumously, the others being the Victoria Cross and George Cross. If a man performed an act of an unusually high degree of heroism that led to his death, his commanders would know that any recognition of that act would be either the Victoria Cross, the Commonwealth's highest decoration—and therefore the subject of much scrutiny, both before and after it was awarded—or else the MiD, the Commonwealth's lowest decoration – a decoration that did not even confer its own discrete medal. The 1979 reform removed the 'all or nothing' lottery.[3]

Below are illustrations of the MiD being worn on a variety of ribbons, applying to the different armed services, the different nations of the Commonwealth and the different types of operation – campaigns recognised with a discrete medal, general war service, internal-security 'Emergencies' and UN peacekeeping operations – from across the 20th century:

Australian service personnel are no longer eligible to be mentioned in dispatches. Since 15 January 1991, when the Australian Honours System was established, the MiD has been replaced by the Australian decorations: the Commendation for Gallantry and the Commendation for Distinguished Service. Similarly, the equivalents of the MiD for acts of bravery by civilians and by soldiers not engaged with the enemy have also been reformed. The reformed and comprehensive system is now as follows:

A mention in dispatches – in French, Citation à l'ordre du jour – gives recognition from a senior commander for acts of brave or meritorious service, normally in the field. The Mention in dispatches is among the list of awards presented by the Governor General of Canada.[8]

Mention in dispatches has been used since 1947, in order to recognize distinguished and meritorious service in operational areas and acts of gallantry which are not of a sufficiently high order to warrant the grant of gallantry awards.[9]

Personnel can be mentioned in dispatches posthumously and multiple awards are also possible. A recipient of a mention in a dispatch is be entitled to wear an emblem, in the form of a lotus leaf on the ribbon of the relevant campaign medal. They are also issued with an official certificate from the Ministry of Defence.[9]

Under the current Pakistani military honours system, the Imtiazi Sanad is conferred upon any member of the Pakistani Armed Forces who is mentioned in dispatches for an act of gallantry that does not qualify for a formal gallantry award.[10]

In 1920 the Minister of Defence of the Union of South Africa was empowered to award a multiple-leaved bronze oak leaf emblem to all servicemen and servicewomen mentioned in dispatches during the First World War for valuable services in action. The emblem, which was regarded as a decoration, was worn on the ribbon of the Victory Medal (Union of South Africa). Only one emblem was worn, irrespective of the number of times a recipient had been mentioned.[11]

The Afrikaans rendition of mentioned in dispatches is Eervolle Vermelding in Berigte.

In 1943, the Union Defence Force confirmed the availability of the British award, the bronze oak leaf, for acts of bravery, in contact with the enemy, which fell just short of the standard required for the granting of a decoration, or for valuable services not necessarily in immediate contact with the enemy.

The mention in dispatches (MiD) was one of only four awards which could be made posthumously. The others were the Victoria Cross, the George Cross, and the King's Commendation (South Africa). The oak leaf emblem was worn on the ribbon of the War Medal 1939–1945.

The King's Commendation (South Africa) (1939–45) was denoted by a bronze King Protea flower emblem worn on the ribbon of the Africa Service Medal, for valuable services in connection with the Second World War. It could be awarded posthumously and was the equivalent of a mention in dispatches for services rendered away from the battlefield.[11]

The MiD and the King's Commendation (SA) were the only decorations that could be approved by the South African Minister of Defence without reference to the King.[11]

Since the French Revolution, France has had the custom of declaring deserving citizens or groups to have bien mérité de la Patrie. This sentiment is continued to this day in the formulation of the citations that accompany medals.

In the French military, mentions in dispatches – or more accurately, mention in orders (citation dans les ordres) – are made by senior commanders, from the level of a Regimental commanding officer to the Commander-in-Chief, in the orders they give to their unit, recognizing the gallantry of an action performed some time before. There are two kinds of mentions : mentions with cross, for bravery in presence of the enemy, and mentions without cross, for bravery not in presence of the enemy.

The citations are given for acts of gallantry by any member of the French military or its allies and are, depending on the degree, roughly the equivalent of the US Bronze Star Medal or Silver Star and the UK Mention in Dispatches or Military Cross and, formerly, the Military Medal.

A unit can also be mentioned in dispatches. The unit standard is then decorated with the corresponding Croix. After two mentions, the men of the unit are entitled to wear a fourragère.

Since 2004, mentions for bravery not involving actual combat with the enemy are awarded with a gold Médaille de la Défense nationale and the same attachments as the Croix de guerre. Before 2004, these mentions were recorded in the service member record, but not recognized with any decoration.

In the early United States Army no awards or medals were given with the exception of a Purple Heart then known as the Badge of Military Merit, though this award fell into disuse shortly after the Revolution. Being noted in dispatches or official reports was the common manner in which to recognize heroic action and gallantry of individuals and units.[citation needed]

On July 12, 1862, the Medal of Honor was created, thus instituting a system of awards in the U.S. Armed Forces. In the years leading up to World War I, citations for bravery, very similar to the Commonwealth practice of MiD, evolved into Citation Stars, and eventually the Bronze Star Medal and Silver Star Medals.

On October 3, 1863, the Adjutant and Inspector-General's Office at Richmond, Va., published General Orders No. 131 establishing the Roll of Honor. Names published were to be read at the head of every regiment at the first dress parade after its receipt and published in at least one newspaper in each state.[12]

During World War II, the Wehrmacht sometimes mentioned individual soldiers in its daily radio report to the public. This was known as the Wehrmachtbericht and a mention in this report was held in high esteem by German soldiers. In mid 1941 mentions in Wehrmachtbericht were awarded by the soldier's name being included on the Honour Roll of the German Army. Later, after January 1944, inclusion on this list was also sometimes rewarded with an honour clasp, known as the Honour Roll Clasp of the Army.[13][14]