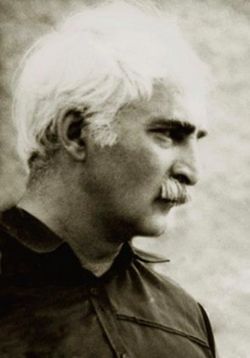 Merab Kostava (Georgian: მერაბ კოსტავა) (May 26, 1939 – October 13, 1989) was a Georgian dissident, musician and poet; one of the leaders of the National-Liberation movement in Georgia. He was born in 1939 in Tbilisi, of the Georgian Soviet Socialist Republic, USSR (the current capital of Georgia).

In 1954, Kostava and Zviad Gamsakhurdia founded the Georgian youth underground organization "Gorgasliani". Between 1956 and 1958 Kostava, together with Gamsakhurdia and several other members of this organization were jailed by the KGB for "anti-Soviet activity." The charges against Kostava and Gamsakhurdia included the dissemination of anti-communist literature and proclamations.

Kostava graduated from the Tbilisi State Conservatoire in 1962. From 1962–1977 he was a teacher at a local music school in Tbilisi.

In 1973, Kostava and Gamsakhurdia established the Initiative Group for defence of Human Rights. In 1976 Kostava co-founded the Georgian Helsinki Group (later renamed the Georgian Helsinki Union in 1989). From 1976–1977 and 1987–1989 Kostava was a member of the Governing Board of the abovementioned human rights organization. After 1975 Kostava was a member of Amnesty International.

In 1977, Kostava and Gamsakhurdia were jailed. Kostava was sent to Siberia to serve his sentence. He was released in 1987. In 1978, the two men were nominated to the Nobel Peace Prize by the Congress of the USA. In 1988 Kostava co-founded the Society of Saint Ilia the Righteous and was one of the leaders of this political pro-independence organization. From 1988–1989 he was one of the organizers and active participants of most (if not all) peaceful pro-independence political actions within the Georgian SSR. On April 9, 1989 Kostava was jailed again but was released after 45 days.

Merab Kostava was active in the underground network of Samizdat publishers, co-publisher of the Georgian underground periodical "Okros Satsmisi" ("The Golden Fleece"). He was the author of many important literary and scientific works.

On October 13, 1989, Merab Kostava died in a car accident. In 2013, he was posthumously awarded the title and Order of National Hero of Georgia.[1]