Mercedes AMG High Performance Powertrains (previously known as Ilmor Engineering and Mercedes-Benz High Performance Engines) is a British Formula One engine manufacturer, owned by Mercedes-Benz. The company has supplied Sauber during the 1994 season, McLaren from 1995 to 2014, Force India since 2009, Brawn in 2009, the Mercedes factory team since 2010, Williams since 2014 and Lotus in 2015. Their engines have won four Formula One Constructors' Championships and six Drivers' Championships. 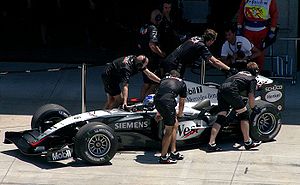 Ilmor was founded by Mario Illien and Paul Morgan in 1983, as an independent British Formula One engine manufacturer. The company name was taken from the surnames of the founders. It originally started building engines for IndyCars with the money of IndyCar team owner and chassis manufacturer Roger Penske.[1]

At the same time, the small Special Projects part of the company, which between 2003 and 2005 had been contracted to design and build Honda's Indy Racing League engines until 2006, split away to become a separate company, owned by Mario Illien and Roger Penske. This new company, which is totally independent of Mercedes, is once again known as Ilmor Engineering Ltd. 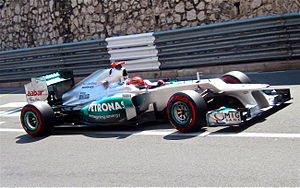 Mercedes-Benz from 2010 onwards also competes as a constructor as well as an engine maker.

In 1991, Ilmor entered Formula One as the engine supplier to the Leyton House team (formerly March). In 1992, Leyton House changed its name back to March and continued using Ilmor engines. Ilmor also delivered engines to the Tyrrell team in that year. Powered by an Ilmor V10, Tyrrell scored 8 points, and March 3 points.[1]

Ilmor already had a good name in F1, and so the Sauber sportscar-team and Mercedes-Benz that were planning their Formula One entrance together signed a deal with Ilmor to produce racing engines for them. However, Mercedes stepped back from the project with the engines only carrying the slogan "Concept by Mercedes-Benz" and the engines were officially called "Saubers".

However, after an unexpectedly fast performance in 1993, Sauber convinced Mercedes to enter officially in 1994. In 1994, Ilmor also supplied the new Pacific GP team of Keith Wiggins with the old 1993 spec engines. Pacific only managed to qualify seven times in thirty-two attempts, although the engine was not implicated in this poor display.

In 2001, Paul Morgan was killed whilst landing his vintage aeroplane at Sywell Aerodrome, Northamptonshire. This led to Mercedes-Benz increasing their financial involvement in Ilmor, with the company being renamed Mercedes-Ilmor Ltd.

The new Formula One regulations in 2014 saw Mercedes produce a hybrid 1.6 litre turbocharged V6 engine, which features both Kinetic energy recovery system and a heat energy recovery system. The Mercedes engine started the season with a clear advantage, with Mercedes-engined cars scoring the majority of the points.[3] Since the introduction of the new engine formula, there has only been one occasion, the 2015 Singapore Grand Prix, where a car with a Mercedes power unit has not been on pole position. Similarly, a Mercedes-powered car has won 32 out of 38 races during this period.