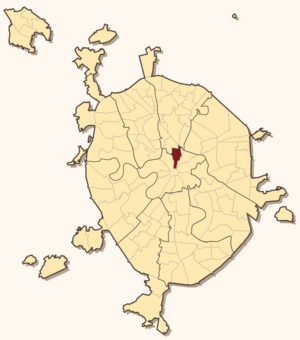 Meshchansky District on the map of Moscow 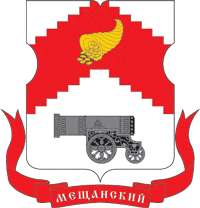 Coat of arms of Meshchansky District

The district contains part of Kuznetsky Most Street, Rozhdestvensky monastery and Rozhdestvensky Boulevard, Olympic Stadium and a row of neoclassical, palace-like buildings north from the Garden Ring. It houses headquarters of Federal Security Service in Lubyanka Square, Central Bank of the Russian Federation, FAPSI and other government agencies.

Meshchane in the Russian Empire denoted a social estate of poor town residents who did not qualify as merchants or civil servants; in modern Russian, it is a pejorative name for a narrow-minded philistine. Meschansky District acquired its name earlier, in the second half of 17th century, through the Ukrainians and Belarusians abducted from their hometowns in the course of Russo-Polish War (1654–1667). These people settled north from present-day Garden Ring, reaching 692 households by 1682 (Sytin, p.296). In their languages, meshchane meant simply "town people", "the locals", without negative connotation; the name of Meshchanskaya sloboda persists to date.

Symbols on the coat of arms denote:

North from Garden Ring: four historical buildings in a row are divided between Meshchansky and Maryina Roshcha District