Meskhetian Turks also known as Meskheti Turks, and Akhaltsikhe / Ahiska Turks (Turkish: Ahıska Türkleri; Georgian: თურქი მესხები, t'urk'i meskhebi) are the ethnic Turks formerly inhabiting the Meskheti region of Georgia, along the border with Turkey. The Turkish presence in Meskheti began with the Ottoman invasion of 1578,[9] although Turkic tribes had settled in the region as early as the eleventh and twelfth centuries.[9]

Today, the Meskhetian Turks are widely dispersed throughout the former Soviet Union (as well as in Turkey and the United States) due to forced deportations during World War II. At the time, the Soviet Union was preparing to launch a pressure campaign against Turkey and Joseph Stalin wanted to clear the strategic Turkish population in Meskheti who were likely to be hostile to Soviet intentions.[10] In 1944, the Meskhetian Turks were accused of smuggling, banditry and espionage in collaboration with their kin across the Turkish border. Approximately 115,000 Meskhetian Turks were deported to Central Asia and only a few hundred have been able to return to Georgia ever since.

The origin of the Meskhetian is still unexplored and highly controversial. But now it seems to emerge two main directions:

However, Anatoly Michailovich Khazanov has argued that "it is quite possible that the adherents of this view oversimplified the ethnic history of the group, particularly if one compares it with another Muslim Georgian group, the Adzhar, who in spite of their conversion to Islam have retained, not only the Georgian language, but to some extent also the Georgian tradition culture and self-identification. Contrary to this, the traditional culture of Meshetian Turks, though it contained some Georgian elements, was similar to the Turkish one".[12] Kathryn Tomlinson has argued that in Soviet documents about the 1944 deportations of the Meskhetian Turks they were referred to simply as "Turks", and that it was after their second deportation from Uzbekistan that the term "Meskhetian Turks" was invented.[13] Furthermore, according to Ronald Wixman, the term "Meskhetian" only came into use in the late 1950s.[14] Indeed, majority of the Meskhetians call themselves simply as "Turks" or "Ahiskan Turks (Ahıska Türkleri)" referring to the region, meaning "Turks of Ahiska Region". The Meskhetians claim sometimes that the medieval Cumans-Kipchaks of Georgia (Kipchaks in Georgia) may have been one of their possible ancestors.[15]

The historical Meskheti region of Georgia.

In 1578, the Ottoman Empire managed to conquer Meskheti during the Ottoman-Safavid War (1578-1590), although it was not secure as a part of the Ottoman Empire until 1639, when a treaty was signed and brought an end to Persian attempts to retake the region.[16]

1944 deportation from Georgia to Central Asia

On 15 November 1944, the then General Secretary of CPSU, Joseph Stalin, ordered the deportation of over 115,000 Meskhetian Turks from their homeland,[17] who were secretly driven from their homes and herded onto rail cars.[18] As many as 30,000 to 50,000 deportees died of hunger, thirst and cold and as a direct result of the deportations and the deprivations suffered in exile.[19][18] The Soviet guards dumped the Meskhetian Turks at rail sidings across a vast region, often without food, water, or shelter; according to the 1989 Soviet Census, 106,000 Meskhetian Turks lived in Uzbekistan, 50,000 in Kazakhstan, and 21,000 in Kyrgyzstan.[17] As opposed to the other nationalities who had been deported during World War II, no reason was given for the deportation of the Meskhetian Turks, which remained secret until 1968.[10] In was only in 1968 that the Soviet government finally recognised that the Meskhetian Turks had been deported. The reason for the deportation of the Meskhetian Turks was because in 1944 the Soviet Union was preparing to launch a pressure campaign against Turkey.[10] In June 1945 Vyacheslav Molotov, who was then Minister of Foreign Affairs, presented a demand to the Turkish Ambassador in Moscow for the surrender of three Anatolia provinces (Kars, Ardahan and Artvin).[10] As Moscow was also preparing to support Armenian claims to several other Anatolian provinces, war against Turkey seemed possible, and Joseph Stalin wanted to clear the strategic Georgian-Turkish border where the Meskhetian Turks were settled and who were likely to be hostile to such Soviet intentions.[10] Unlike the other deported Muslim groups, the Meskhetians have not been rehabilitated nor permitted to return to their homeland. In April 1970, the leaders of the Meskhetian Turkish national movement applied to the Turkish Embassy in Moscow for permission to emigrate to Turkey as Turkish citizens if the Soviet government persisted its refusal to allow them to resettle in Meskheti. However, the response of the Soviet government was to arrest the Meskhetian leaders.[20]

1989 deportation[21] from Uzbekistan to other Soviet countries 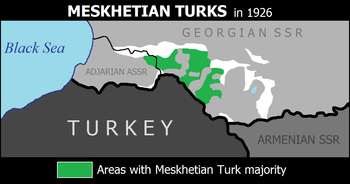 The settlement area of Meskhetian Turks, 1926.

More recently, some Meskhetian Turks in Russia, especially those in Krasnodar, have faced hostility from the local population. The Krasnodar Meskhetian Turks have suffered significant human rights violations, including the deprivation of their citizenship. They are deprived of civil, political and social rights and are prohibited from owning property and employment.[26] Thus, since 2004, many Turks have left the Krasnodar region for the United States as refugees. (A large population of which, comprises nearly 1300 individuals is in Dayton, Ohio). They are still barred from full repatriation to Georgia.[27] However, in Georgia, racism against Meskheti Turks is still in popularity, due to difference beliefs and ethnic tensions.[citation needed]

The Meskhetian Turks speak an Eastern Anatolian dialect of Turkish, which hails from the regions of Kars, Ardahan, and Artvin.[28] The Meskhetian Turkish dialect has also borrowed from other languages (including Azerbaijani, Georgian, Kazakh, Kyrgyz, Russian, and Uzbek) which the Meskhetian Turks have been in contact with during the Russian and Soviet rule.[28]