Metaphysics (Greek: τὰ μετὰ τὰ φυσικά; Latin: Metaphysica[1]) is one of the principal works of Aristotle and the first major work of the branch of philosophy with the same name. The principal subject is "being qua being," or being insofar as it is being. It examines what can be asserted about anything that exists just because of its existence and not because of any special qualities it has. Also covered are different kinds of causation, form and matter, the existence of mathematical objects, and a prime-mover God.

The Metaphysics is considered to be one of the greatest philosophical works. Its influence on the Greeks, the Muslim philosophers, the scholastic philosophers and even writers such as Dante, was immense. It is essentially a reconciliation of Plato's theory of Forms that Aristotle acquired at the Academy in Athens, with the view of the world given by common sense and the observations of the natural sciences. According to Plato, the real nature of things is eternal and unchangeable. However, the world we observe around us is constantly and perpetually changing. Aristotle’s genius was to reconcile these two apparently contradictory views of the world.[2] The result is a synthesis of the naturalism of empirical science, and the rationalism of Plato, that informed the Western intellectual tradition for more than a thousand years.[3]

At the heart of the book lie three questions. What is existence, and what sorts of things exist in the world? How can things continue to exist, and yet undergo the change we see about us in the natural world? And how can this world be understood?

By the time Aristotle was writing, the tradition of Greek philosophy was only two hundred years old. It had begun with the efforts of thinkers in the Greek world to theorize about the common structure that underlies the changes we observe in the natural world. Two contrasting theories, those of Heraclitus and Parmenides, were an important influence on both Plato and Aristotle.

Heraclitus argued that things that appear to be permanent are in fact always gradually changing. Therefore, though we believe we are surrounded by a world of things that remain identical through time, this world is really in flux, with no underlying structure or identity. By contrast, Parmenides argued that we can reach certain conclusions by means of reason alone, making no use of the senses. What we acquire through the process of reason is fixed, unchanging and eternal. The world is not made up of a variety of things in constant flux, but of one single Truth or reality. Plato’s theory of forms is a synthesis of these two views. Given, any object that changes is in an imperfect state. Then, the form of each object we see in this world is an imperfect reflection of the perfect form of the object. For example, Plato claimed a chair may take many forms, but in the perfect world there is only one perfect form of chair.

Aristotle encountered the theory of forms when he studied at the Academy, which he joined at the age of about 18 in the 360s B.C.[4] Aristotle soon expanded on the concept of forms in his Metaphysics. He believed that in every change there is something which persists through the change (for example, Socrates), and something else which did not exist before, but comes into existence as a result of the change (musical Socrates). To explain how Socrates comes to be born (since he did not exist before he was born) Aristotle says that it is ‘matter’ (hyle) that underlies the change. The matter has the ‘form’ of Socrates imposed on it to become Socrates himself. Thus all the things around us, all substances, are composites of two radically different things: form and matter. This doctrine is sometimes known as Hylomorphism (from the Greek words for matter and form).

Title, date, and the arrangement of the treatises 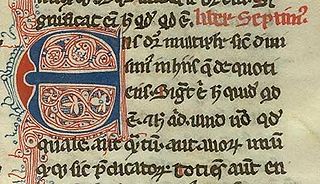 Book 7 of the Metaphysics: Ens dicitur multipliciter- the word 'being' is meant in many ways. From a manuscript of William of Moerbeke's translation

Subsequent to the arrangement of Aristotle's works by scholars at Alexandria in the first century CE, a number of his treatises were referred to as τὰ μετὰ τὰ φυσικά (ta meta ta fysika; literally, "the [writings] after the Physics"). This is the origin of the title for collection of treatises now known as Aristotle's Metaphysics. Some have interpreted the expression "τὰ μετὰ τὰ φυσικά" to imply that the subject of the work goes "beyond" that of Aristotle's Physics or that it is metatheoretical in relation to the Physics. But others believe that "τὰ μετὰ τὰ φυσικά" referred simply to the work's place in the canonical arrangement of Aristotle's writings, which is at least as old as Andronicus of Rhodes or even Hermippus of Smyrna.[5] Within the Aristotelian corpus itself,[6] the metaphysical treatises are referred to as τὰ περὶ τῆς πρώτης φιλοσοφίας (literally, "the [writings] concerning first philosophy"); "first philosophy" was what Aristotle called the subjects of metaphysics. (He called the study of nature or natural philosophy "second philosophy" (Metaphysics 1037a15).)

It is notoriously difficult to specify the date at which Aristotle wrote these treatises as a whole or even individually, especially because the Metaphysics is, in Jonathan Barnes' words, "a farrago, a hotch-potch", and more generally because of the difficulty of dating any of Aristotle's writings.[7]

Book I or Alpha outlines "first philosophy", which is a knowledge of the first principles or causes of things. The wise are able to teach because they know the why of things, unlike those who only know that things are a certain way based on their memory and sensations. Because of their knowledge of first causes and principles they are better fitted to command, rather than to obey. Book Alpha also surveys previous philosophies from Thales to Plato, especially their treatment of causes.

Book II or "little alpha": The purpose of this chapter is to address a possible objection to Aristotle’s account of how we understand first principles and thus acquire wisdom. Aristotle replies that the idea of an infinite causal series is absurd, and thus there must be a first cause which is not itself caused. This idea is developed later in book Lambda, where he develops an argument for the existence of God.

Book V or Delta ("philosophical lexicon") is a list of definitions of about fifty key terms such as cause, nature, one, and many.

Book VI or Epsilon has two main concerns. Aristotle is first concerned with a hierarchy of the sciences. As we know, a science can be either productive, practical or theoretical. Because theoretical sciences study being or beings for their own sake—for example, Physics studies beings that can be moved (1025b27)—and do not have a target (τέλος, end or goal; τέλειος, complete or perfect) beyond themselves, they are superior. The study of being qua being, or First Philosophy, is superior to all the other theoretical sciences because it is concerned the ultimate causes of all reality, not just the secondary causes of a part of reality. The second concern of Epsilon is proving that being (τὸ ὄν) considered per accidens (κατὰ συμβεβηκὸς) cannot be studied as a science. Per accidens being does not involve art (τέχνη), nor does exist by necessity (per se or καθ᾽ αὑτό), and therefore does not deserve to be studied as a science. Aristotle dismisses the study of the per accidens as a science fit for Sophists, a group whose philosophies (or lack thereof) he consistently rejects throughout the Metaphysics.

The Middle Books are generally considered the core of the Metaphysics.

Book Zeta begins with the remark that ‘Being’ has many senses. The purpose of philosophy is to understand being. The primary kind of being is what Aristotle calls substance. What substances are there, and are there any substances besides perceptible ones? Aristotle considers four candidates for substance: (i) the ‘essence’ or ‘what it was to be a thing’ (ii) the Platonic universal, (iii) the genus to which a substance belongs and (iv) the substratum or ‘matter’ which underlies all the properties of a thing. He dismisses the idea that matter can be substance, for if we eliminate everything that is a property from what can have the property, we are left with something that has no properties at all. Such 'ultimate matter' cannot be substance. Separability and 'this-ness' are fundamental to our concept of substance.

Chapters 13–15 consider, and dismiss, the idea that substance is the universal or the genus, and are mostly an attack on the Platonic theory of Ideas. Aristotle argues that if genus and species are individual things, then different species of the same genus contain the genus as individual thing, which leads to absurdities. Moreover, individuals are incapable of definition.

Chapter 17 takes an entirely fresh direction, which turns on the idea that substance is really a cause.

Book Eta consists of a summary of what has been said so far (i.e., in Book Zeta) about substance, and adds a few further details regarding difference and unity.

Theta sets out to define potentiality and actuality. Chapters 1–5 discuss potentiality. We learn that this term indicates the potential (δύναμις, dunamis) of something to change: potentiality is "a principle of change in another thing or in the thing itself qua other" (1046a9). In chapter 6 Aristotle turns to actuality. We can only know actuality through observation or "analogy;" thus "as that which builds is to that which is capable of building, so is that which is awake to that which is asleep...or that which is separated from matter to matter itself" (1048b1–4). Actuality is the completed state of something that had the potential to be completed. The relationship between actuality and potentiality can be thought of as the relationship between form and matter, but with the added aspect of time. Actuality and potentiality are diachronic (across time) distinctions, whereas form and matter are synchronic (at one time) distinctions.

Book X or Iota: Discussion of unity, one and many, sameness and difference.

Book XI or Kappa: Briefer versions of other chapters and of parts of the Physics.

Book XII or Lambda: Further remarks on beings in general, first principles, and God or gods. This book includes Aristotle's famous description of the unmoved mover, "the most divine of things observed by us", as "the thinking of thinking".

Books XIII and XIV, or Mu and Nu: Philosophy of mathematics, in particular how numbers exist.

In the 19th century, with the rise of textual criticism, the Metaphysics was examined anew. Critics, noting the wide variety of topics and the seemingly illogical order of the books, concluded that it was actually a collection of shorter works thrown together haphazardly. Werner Jaeger further maintained that the different books were taken from different periods of Aristotle's life. Everyman's Library, for their 1000th volume, published the Metaphysics in a rearranged order that was intended to make the work easier for readers.

Some of the earlier scholars of the Metaphysics were Arabs, who relied on Arabic translations from early Syriac translations from the Greek (see Medieval Philosophy). The book was lost in the Latin West from the collapse of Rome until the twelfth century. For a period, scholars relied on Latin translations of the Arabic, particular Michael Scot's translation of Averroes' commentary. These were sometimes inaccurate, having been through so many stages of translation.

In the thirteenth century, following the Fourth Crusade, the original Greek manuscripts became available. One of the first Latin translations was made by William of Moerbeke. William's translations are literal, and were intended faithfully to reflect the Greek word order and style. These formed the basis of the commentaries of Albert the Great, Thomas Aquinas and Duns Scotus. They were also used by modern scholars for Greek editions, as William had access to Greek manuscripts that are now lost. Werner Jaeger lists William's translation in his edition of the Greek text in the Scriptorum Classicorum Bibliotheca Oxoniensis (Oxford 1962).[12]